By Sandy Higgins, Office of Worship 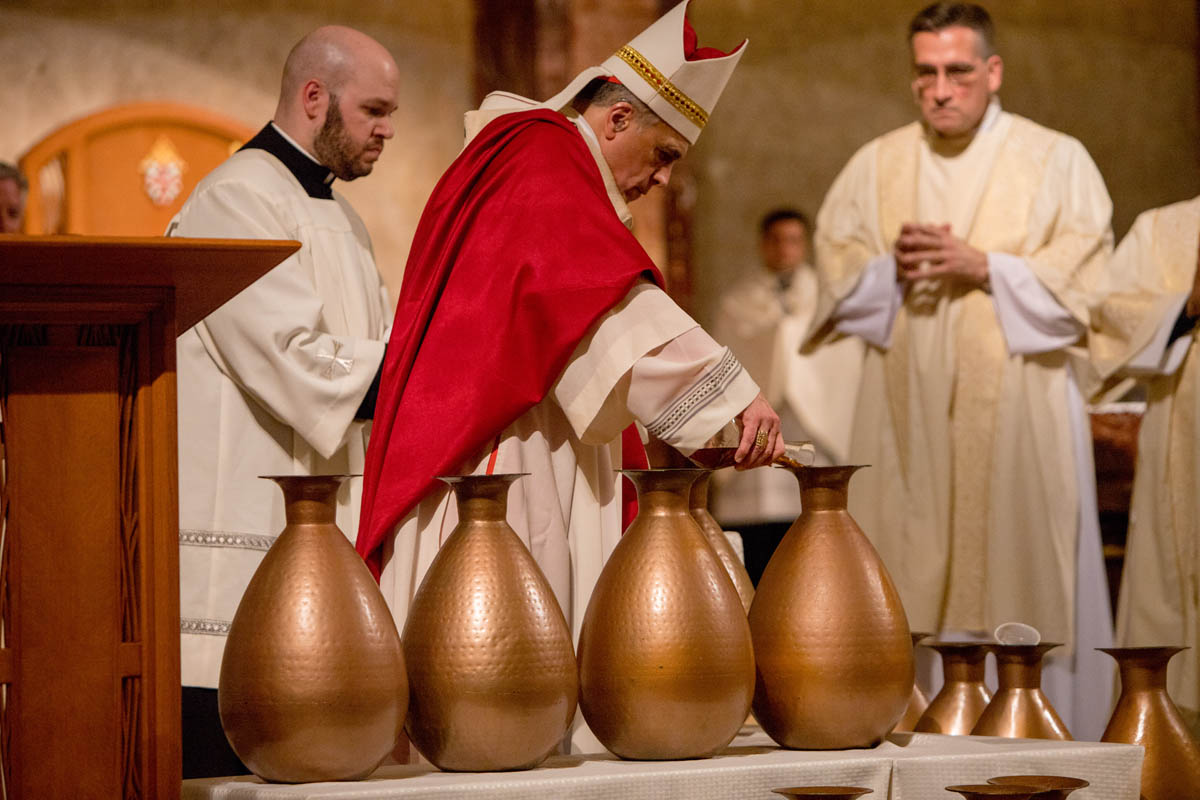 Chrism Mass is held each year during Holy Week.

At Chrism Mass, the olive oil which is used for anointing is blessed and consecrated by Daniel Cardinal DiNardo. These oils are then distributed throughout the Archdiocese for use in the administration of Sacraments and for particular preparatory rituals.

While we do not have the precise ritual used in the early Church, we do have reference to the blessing of oils, which would be used at initiation at Easter Vigil. Tertullian writes about candidates being “anointed with the blessed oil” after Baptism. Around 215 AD, Hippolytus describes the bishop praying a prayer of blessing over the “oil of thanksgiving,” making reference to the oil of exorcism and describes, in particular, the blessing of the oil of the sick after the Eucharistic Prayer. To this day, this ancient practice of blessing the Oil of the Sick occurs at the conclusion of the Eucharistic Prayer.

The Oil of the Sick is used during the Sacrament of Anointing of the Sick for those who are seriously ill or dying, frail from old age or about to undergo major surgery. “The prayer of faith will save the sick, and the Lord will raise them up, and anyone who has committed sins will be forgiven” (James 5:15). The Oil of the Catechumens strengthens the person who is going to be baptized to help them to turn away from sin and evil.

Sacred Chrism is a mixture of olive oil and balsam fragrance, which is consecrated at Chrism Mass. It is used to anoint the newly baptized, to seal candidates at Confirmation and to anoint the hands of priests and the heads of bishops at their ordination. Altars and churches are also consecrated with Sacred Chrism when they are dedicated.

At Chrism Mass, prior to saying the Prayer of Consecration over the Sacred Chrism, the bishop (Cardinal DiNardo) breathes upon the vessel containing the oil and balsam. This action is a sign of the Holy Spirit during which the bishop recalls the Spirit of God “moving over the face of the waters” at creation and Jesus’ appearance to the disciples post-resurrection when He “breathed on them and said to them, ‘Receive the Holy Spirit’” (John 20:22).

In his third Mystagogic Catechesis, St. Cyril of Jerusalem profoundly expresses: But beware of supposing this to be plain ointment. For as the Bread of the Eucharist, after the invocation of the Holy Ghost, is mere bread no longer, but the Body of Christ, so also this holy ointment is no more simple ointment, nor (so to say) common, after invocation, but it is Christ’s gift of grace, and, by the advent of the Holy Ghost, is made fit to impart His Divine Nature. Which ointment is symbolically applied to your forehead and your other senses; and while your body is anointed with the visible ointment, your soul is sanctified by the Holy and life-giving Spirit. (3.3)

The assembled priests extend their hands during the consecration of the Sacred Chrism, signifying their participation in the bishop’s office of teaching, sanctifying and governing the Church.

Pope Paul VI desired Chrism Mass to be a time when the priests would renew their commitment, made at ordination “out of love for the Lord Jesus and His Church,” in the presence of their bishop. The faithful from the parishes are encouraged to witness this commitment and are exhorted to pray for their priests and bishop.

The readings at this Mass also affirm the priestly character of the people of God.

“You shall be called the priests of the Lord” (Isaiah 61:1-9) and Christ has made us “a kingdom, priests to His God and Father” (Rev. 1:5-8). The Preface instructs, “For Christ not only adorns with a royal priesthood the people he has made His own, but with a brother’s kindness He also chooses men to become sharers in His sacred ministry through the laying on of hands.”

This year, since attendance at Chrism Mass is by invitation-only due to limited seating, you will have an opportunity to join in the Mass via live stream at www.archgh.org/live at 6 p.m. on March 30. I encourage you to join in this rich and ancient tradition. The presentation of these newly blessed and consecrated oils at the Holy Thursday Mass at your parish will have a fuller and richer meaning for you.

Sandy Higgins is the director of the Office of Worship.