Here a cow, there a chicken, R-O-D-E-O: Rodeo’s 90th anniversary celebration was a banner year, and then some 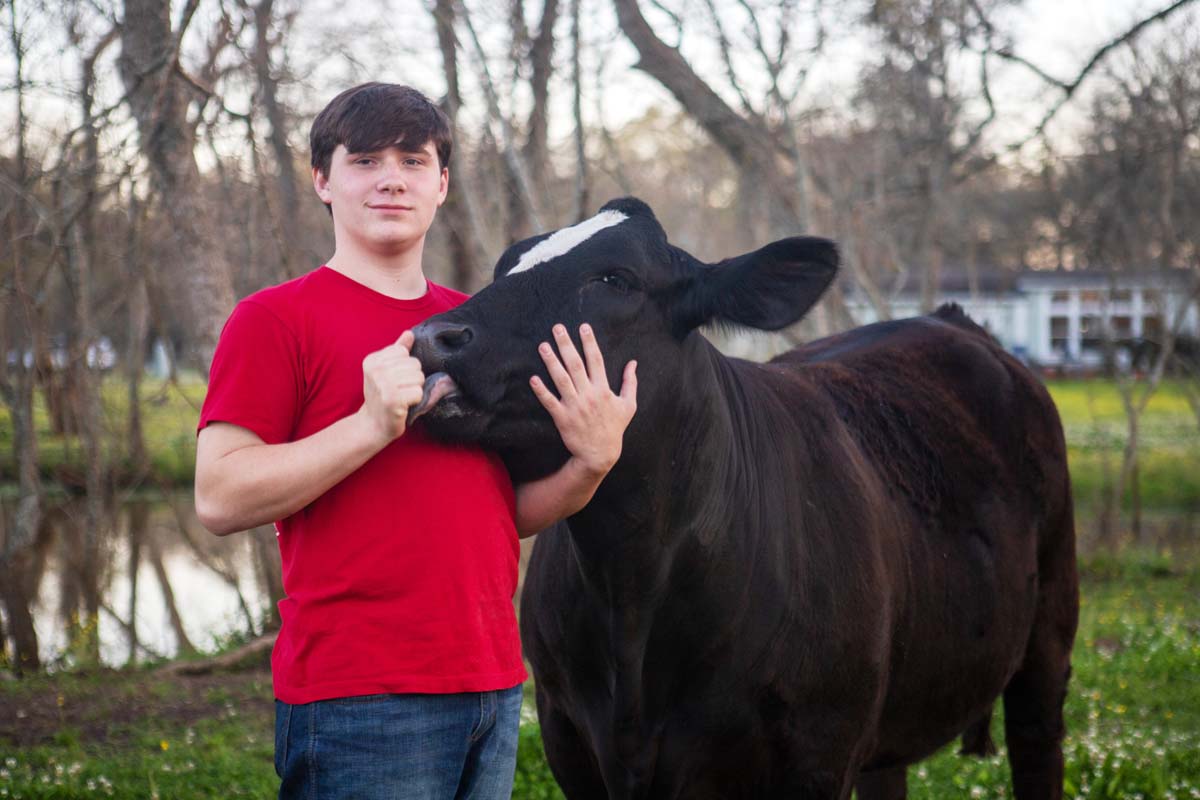 HOUSTON — Backed by the prayers of his parents, cheers from his friends and teachers, and a healthy dose of grit, 16-year-old Lucas Noonan entered NRG Stadium at the Houston Livestock Show and Rodeo with one goal in mind: to catch and rope a calf.

Noonan, a junior at Ridge Point High School and parishioner at St. Angela Merici Catholic Church in Missouri City, was one of nearly 480 participants in the Rodeo’s ever-famous calf scramble.

It’s a chaotic cardio workout mixed with determination, dexterity and derring-do, all on a football field-sized arena floor. That night, before a growing crowd of 70,129, all there to see Los Tucanes de Tijuana for Go Tejano Day, Noonan stepped into the bright lights for the Rodeo’s seventh calf scramble of the year.

“I don’t remember all of it, but all the calves come running,” he said, back on the Noonan family farm in Rosharon a few weeks later. “I know they usually just follow the fence, so I just ran out and grabbed one, and then I had it.” He had done it. Not even two and half minutes into the bovine fracas, Lucas had crossed the white line.

“He didn’t even get dirty,” his mom, Danielle Noonan, said, laughing.

For the uninitiated, the calf scramble is a crowd favorite at the Rodeo. Fifteen calves are sent to the arena floor with 30 teens waiting to chase and rope, and then tug them into a designated rectangle. It’s never easy, and the tug-of-war can begin at the far end of the stadium and it’s surely not an event for the faint of heart. Sometimes it’s downright brutal. 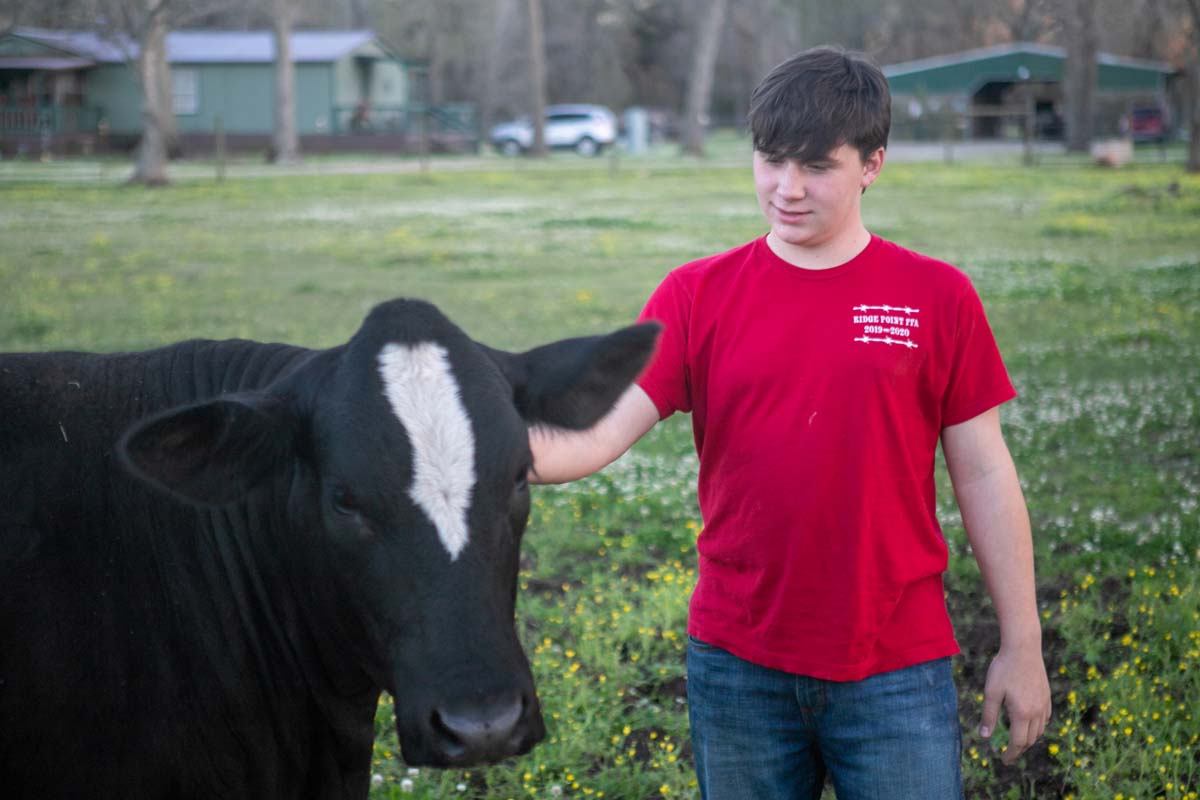 A rope around a calf’s neck doesn’t mean it’s over: a quick throw of the weighty calf’s head can send a youngster flying faster than an impatient Sign of the Cross.

“Other people were really struggling [that night],” Lucas said. “They all got dragged and kicked. One girl got tossed under one, and she got stepped on the eye. Another day, my friend saw this guy coming out, and some calf stepped out on his head: he had a hole in his head.”

But 2022 wasn’t his first rodeo. Lucas had scrambled last year but wasn’t as lucky. At the modified show — the bigger Rodeo and concert series was canceled last year because of the pandemic — he came up empty-handed and void of a calf. Each year a win earns a teen a $1,750 check to purchase a heifer or steer to show next year at the Houston Livestock Show. It also grants students access to special competitions and additional scholarships.

Still, even with the win, Lucas and his 14-year-old brother James both already had two heifers to care for at home. Year-old Rosie became Lucas’s darling baby, with brother James caring for Venus.

A coop of good things

Lucas also competed in the Junior Market Broiler Show with his cockerel chickens, another labor-intensive process that lasts just six to eight weeks. It begins with 50 chicken eggs, six of which eventually grow to be Lucas’s best of his brood. Between feeding, stirring (the process of moving the baby chickens around so they grow in size) and cleaning the coop, it’s a full-time gig for the teenager.

“It was ridiculous,” Lucas said, laughing. “They eat so much.”

While many other teens might head to Six Flags for Spring Break, Lucas and his father, Chris, trekked in the early dawn mornings to the Rodeo at NRG Park with his half-dozen chickens in tow to show against hundreds of other teens from all across Texas.

Almost five hours later, Lucas’s chickens earned him a 74th place finish among 100 that placed out of a field of some 150-plus competitors. His high finish also got him a spot in the auction phase, the last chance to see his feathered friends before they’re taken off to the slaughterhouse, a reality for many young competitors at the livestock show. It’s not uncommon for a teen to be overcome with emotion during that parting glance. 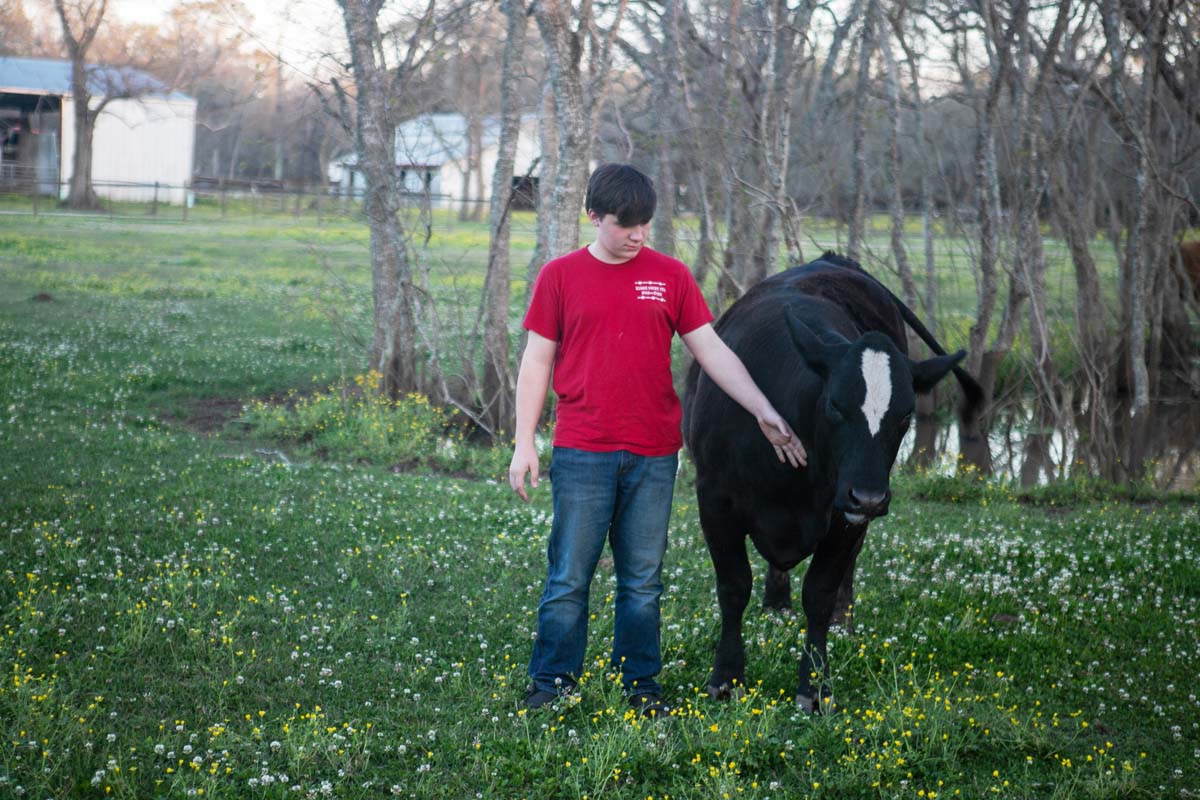 But with Rosie, his Simbrah heifer, she sauntered her way to a sixth-place finish in his class of Junior Breeding Beef Heifers. Standing tall to Lucas’s shoulder, she likes to lick his hand with her rough tongue, gently mooing occasionally. A larger white spot marks her head, one that she often uses to head-butt her caretaker. James led Venus to a fourth-place spot in his class.

As parents, Chris and Danielle often have the wider perspective on the livestock raising experience. They saw it as an opportunity for growth and learning for their three sons, including 11-year-old Henry.

The life skills that livestock raising teaches are handy inside and outside of the barn, they said.

“You can take those skills and apply it to any environment,” Chris said. “It’s a really good program.”

A strong support team from his school’s Future Farmers of America group helped him smoothen the ruffled feathers along the way to the largest livestock show in the world.

Lucas’ successful calf scramble didn’t end that night: since it netted him another opportunity to get another heifer or even a steer, the process grows to include new donors who stay in touch with Lucas. When he starts raising that animal, he’ll stay in connection with them, offering a daily record of expenses, a business plan, reports and pictures, as well as two essays and a stall display at the show in 2023.

It’s easy for teens to just look down at their phones and never look up, but for Lucas, he’s already game-planning for next year.

“Maybe ducks? I might try the ducks out,” Lucas said to his mom.

“But I’m going to have to name the ducks. That’s the thing,” Lucas said, eyes trailing off.

‘There’s so many things that can go wrong’

Now with Houston’s rodeo behind him, Lucas has a bit of breathing room between shows. Lucas’s March was also marred by heartbreak when his beloved Rosie lost her calf. One morning, before heading to school, Lucas was checking her and noticed something was awry.

“There are so many things that can go wrong,” Lucas said.

His dad Chris agreed: “We’re not in control of everything. And it’s sad when that happens, but there’s a reason for everything.”

Danielle said the family just realized they had to put trust in God, that the Lord was going to work it out.

She also saw a Lenten parallel between the livestock life they had chosen. There was much to give up in order to lead the life they had.

“There are a lot of things that you give up,” Lucas said. Both Chris and Danielle also have full-time jobs. Lucas had to pull out of his school for the duration of his show season that bounced the family all around the Lone Star State, missing 30 days of in-person school work.

Lucas even showed Rosie on Ash Wednesday, noting that he saw several people walking around the green-laden ring with ash crosses on their forehead. The days might be long, with back-to-back competitions during 13 or 14 hour-long days. His junior show was at the same time as his chicken show.

Lucas also understood another truth when it comes to life and especially livestock.

“You can’t keep everything as a thing. You have to be willing to let things go,” he said.

But when things go right?

Lucas beamed when talking about roping that calf during the scramble, his chickens and anytime he talked about Rosie his cow.