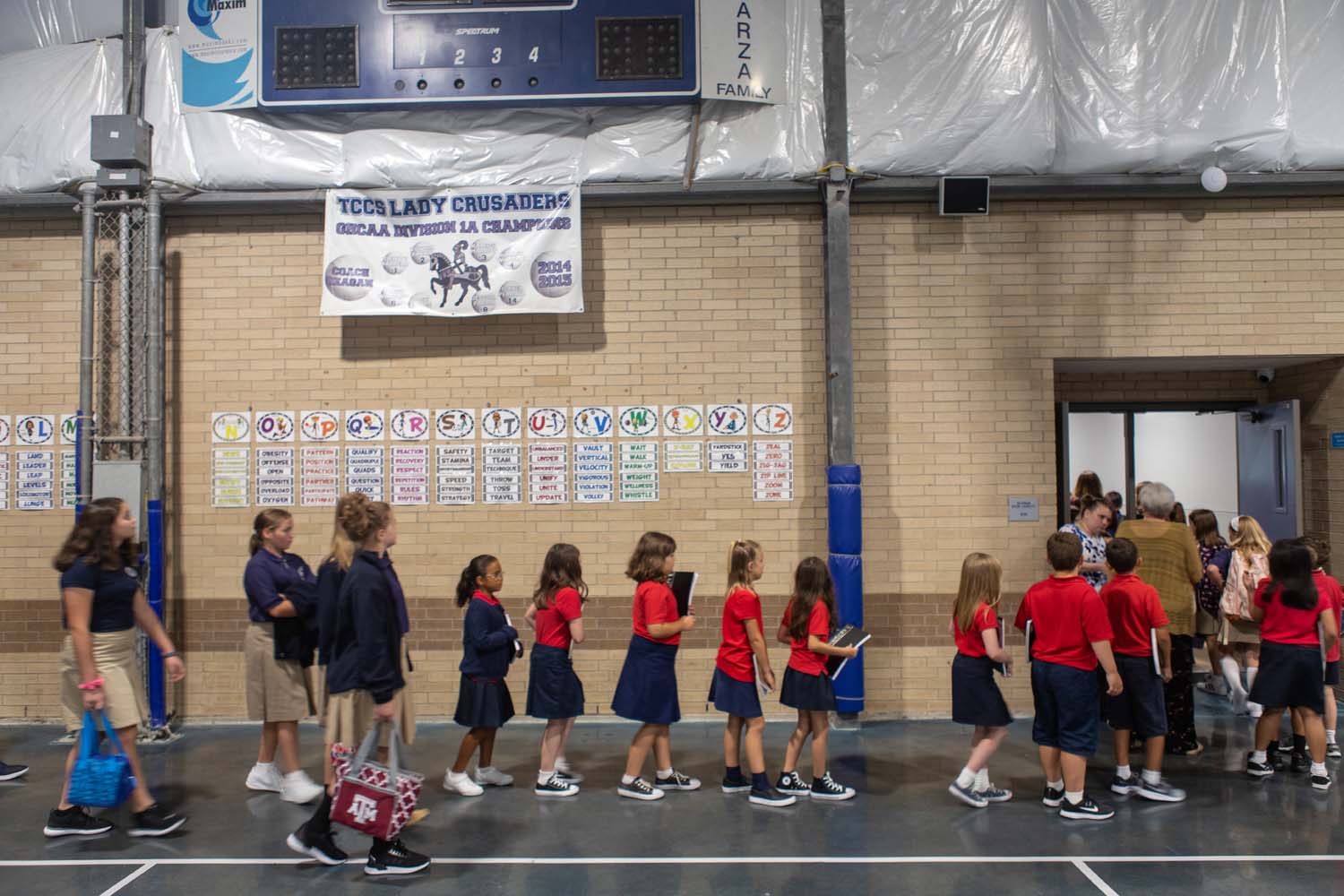 True Cross Catholic School students walk to class on the first day of school Aug. 12 in Dickinson. The school was devastated by Hurricane Harvey in 2017 and temporarily moved to a nearby Catholic school until returning in 2018. Aug. 25, 2019 marked two years since Hurricane Harvey wrecked the Texas Gulf Coast in 2017 with record-breaking rainfall. (Photo by James Ramos/Herald)

HOUSTON — Hurricane Harvey’s floodwater sheared Shrine of the True Cross Catholic Church and True Cross School in Dickinson apart. A boat rescued its pastor, like thousands of other Dickinson residents.

After Harvey, which struck the same week the U.S. was enthralled by a solar eclipse right before school started, True Cross School moved to nearby Our Lady of Fatima Catholic School in Texas City for the school year.

Even after the storm, True Cross School only saw enrollment falter by single digits, school officials said. The Dickinson school has deep roots in the community, said Yolanda Agrella, True Cross Catholic School’s principal. Some families have at least three generations of students in the school.

Two years later on Aug. 12, she greeted the school’s first day of class, like a bright sun after a long rain. True Cross was one of the first schools in the Archdiocese to begin the new school year.

Looking back, she said both the storm and the resulting move was traumatic for both students and families, as well as teachers.

In the weeks before the 2019 school year, students were still having nightmares about the rain and the boats they escaped on, according to Agrella. After the school was displaced to Texas City, students were offered counseling to help them along in the recovery process.

While Harvey can seem like a distant memory for some, Agrella said it’s a daily memory for the students and faculty who she said were deeply affected, especially when it rains. “They still feel it,” she said.

She estimated a quarter of her students were displaced by Harvey, some living on the second story of their flooded homes during repairs.

But on the first day of class of the fall semester, Agrella beamed as she walked through the bright hallways of the school she leads. Faculty mingled with students during lunch, sharing big hugs. “Your hair is different. I love it!” one teacher exclaimed.

Junior high students explored the science lab while young pre-kindergartners opened up new crayon boxes to color drawings that said: “I had a great first day of preschool!”

Even with the positives surrounding them, Agrella, with her staff, navigates some remaining changes and frustrations from the storm.

“I still see some needs here,” she said. The school’s PA system in the cafeteria still needs repair, the old system was ripped out following Harvey, among other instructional resources still needing improvement or replacement.

Still, Agrella said the entire community remained deeply thankful for the outpouring of donations that came after Harvey across the U.S. and even abroad.

With each class change, the school was building a routine to set up the students for success. Large crosses and posters with prayers alongside Rosaries reminded the young learners of the importance of prayer and faith while learning their academics. 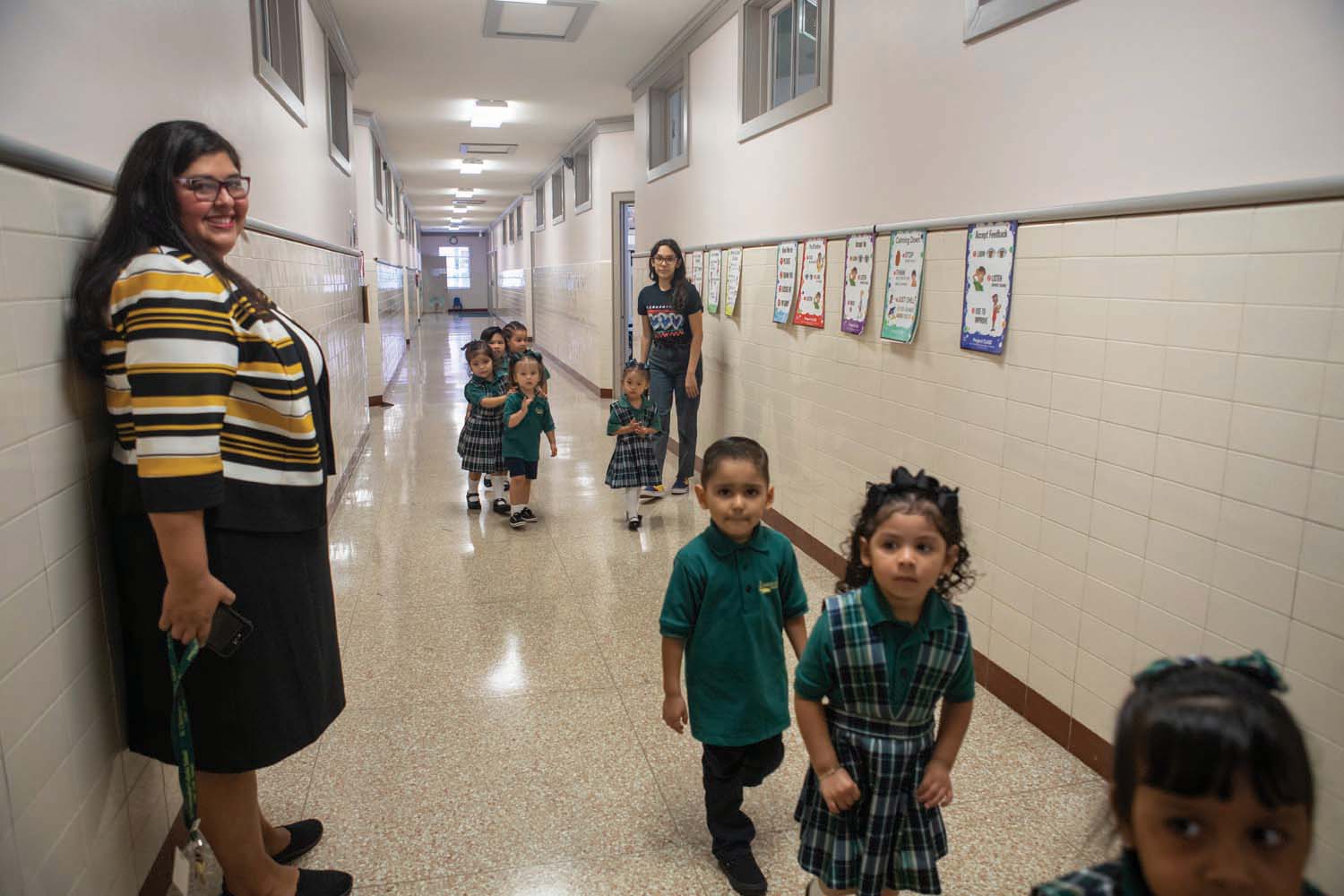 The same night that 80 percent of Dickinson flooded, a roof and ceiling collapsed in one of St. Christopher Catholic School’s main buildings because of Harvey’s torrential rainfall. The next day after the storm hit, the parish gym also opened up as a shelter to host nearby displaced residents.

The school in Houston’s Park Place neighborhood off I-45 near Sims Bayou was forced to consolidate to a single two-story building, making that school year a tight squeeze.

But the shift was “quite difficult,” she said. Teachers in the lower grades, whose classrooms were destroyed, lost many instructional and resource materials, as well as electronics and technology used in class. Almost 25 families and staff at the school were affected, Cavazos said, with a few displaced from their homes.

But the school, like True Cross School and others, received many donations from kind-hearted community members, teachers and schools around the nation.

In the months after the storm, numerous schools and properties recuperated from damages caused by Harvey. Other than True Cross School, only one other school was catastrophically damaged by Harvey. St. Francis of Assisi Catholic School in Kashmere was displaced after floodwaters from nearby Hunting Bayou rushed into both the school and its church.

Both Cavazos and Agrella said they think that those who donated or supported the school might forget about them within the next year as time moves on and other disasters happen or other pressing needs grow.

Still, Cavazos, like Agrella, believes in their Catholic schools.

Despite limitations, such as difficulties encountered when running a Catholic school in an urban center or discovering new needs two years after Harvey, Cavazos said she remains motivated to provide a strong Catholic education in Southeast Houston.

Often “it means I have to work twice as hard, but I know that I do it for the Lord,” she said. “If I am willing and able to, I will serve Him at whatever capacity He wants me to serve him.”

Cavazos said she felt called by God to be at St. Christopher, and after He helped get her through her education and 15-plus years of teaching in public schools, “what better way to serve Him than to serve Him in a Catholic school?”

And, especially after Harvey, she hasn’t looked back since, she said.