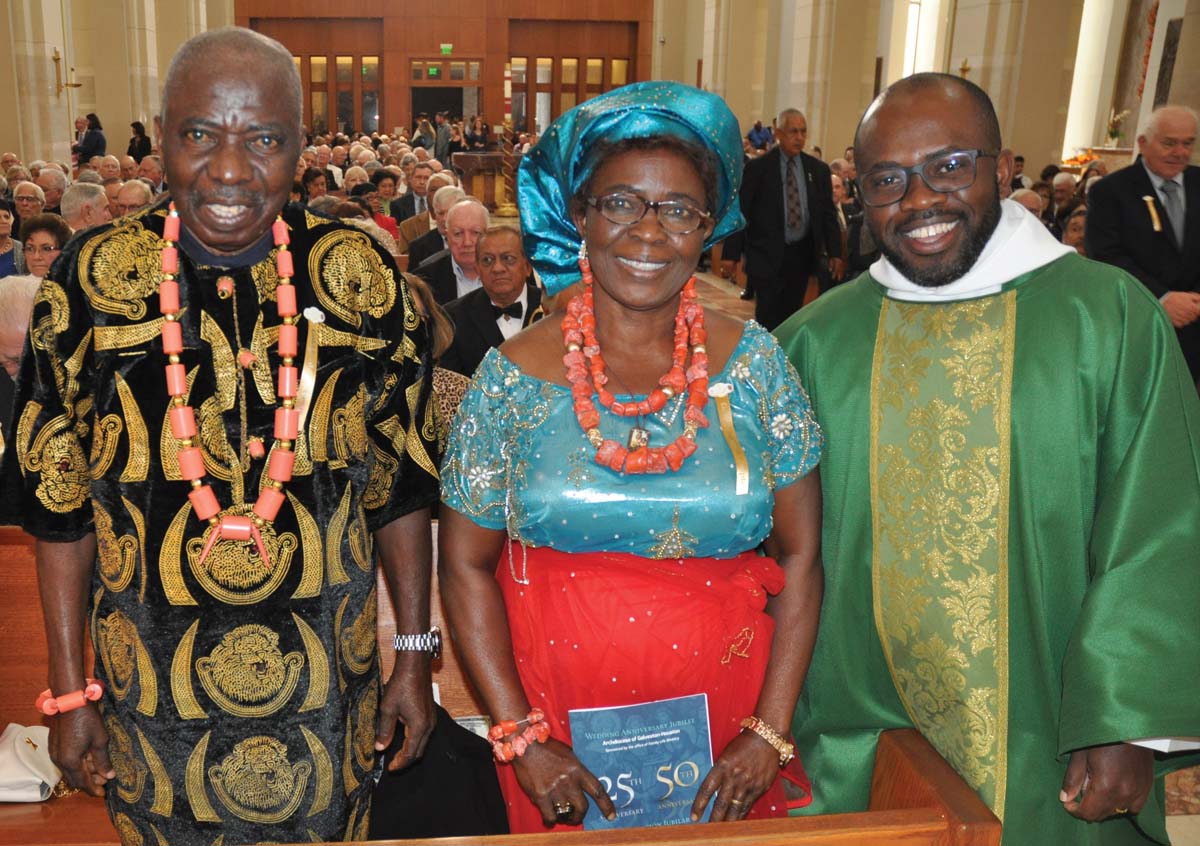 Michael and Philomena Ezuma, seen here with their son Father Jude Ezuma, pastor of Holy Family Parish in Galveston, celebrate their 50th wedding anniversary at the 2018 Wedding Golden Jubilee Anniversary Mass at the Co-Cathedral of the Sacred Heart in Houston Oct. 20. As part of the Mass, more than 200 couples renewed their wedding vows with their children, grandchildren and other family members at their side at the Co-Cathedral of the Sacred Heart Oct. 20. Photo by Jonah Dycus/Herald.

HOUSTON — Married couples who have shared 50 years of joys and sorrows celebrated their anniversaries in a Golden Jubilee Mass Oct. 20 at the Co-Cathedral of the Sacred Heart of Jesus, including Michael and Philomena Ezuma, who traveled from Nigeria to the United States for the first time to visit their son, Father Jude Ezuma, a priest with the Archdiocese of Galveston-Houston.

“I learned everything from them. My parents made sure we were all baptized as children,” said Father Ezuma, pastor of Holy Family Parish in Galveston.

The fifth of seven children, Father Ezuma said neither of his parents were “cradle Catholics,” instead choosing to convert when they were both teens.

“They were of tribal religions. In fact, my mother’s father was the shaman or ‘dibia,’ tribal priest,” he said.

When asked what advice they would give to younger couples, Michael Ezuma said, “The priority is to put your faith in God. Once you do that, good will follow.” Philomena Ezuma added, “Have patience, tolerance and be generous.”

Charley and Mary Green did not travel quite so far. Originally from West Virginia and high school senior sweethearts, they moved to Houston 37 years ago.

But they traveled eons spiritually after losing their 34-year-old daughter to cancer who left behind a husband and two small sons.

“Going through such a tragedy either tears you both apart or brings you together,” Mary said. “We were able to share our struggles with each other.”

“Sometimes I still argue with God about that decision, but He knows best,” Charley said.

They both credit participating in a Catholic-based Marriage Encounter after being married for 10 years and then becoming a mentor couple for Marriage Encounter in keeping their partnership strong. They are also active in the Cursillo Movement in the Archdiocese and travel worldwide to various Cursillo Encounters.

Native Houstonians Kenneth and Saunnie Box were actually celebrating 60 years of marriage and the recent birth of their first great-grandchildren, boy and girl twins. The high school sweethearts, married at 17 and 19, are now turning 78 and 80. When they married, Saunnie was already working at a downtown bank and Kenneth was attending the University of Houston, eventually becoming a civil attorney before retiring.

“You have to remember what’s most important to you — your spouse. Don’t let the small things bother you so much,” Kenneth said.

Saunnie agreed, “You need to respect each other’s opinions and wishes — compromise on both sides.”

Auxiliary Bishop George A. Sheltz, who celebrated the Mass, shared in his homily about his parents’ anniversary with the more than 220 couples attending, “My mother and dad, God bless their souls, were married in 1941. They kept saying, ‘Well, we might not make 50,’ so we had to throw a party for them at 45, 46,47,48, 49 and 50!” the bishop said as the crowd laughed.

“But it was an exciting time to realize two people loved each other so much that they gave their total lives to each other,” he said and then blessed the couples attending as they recommitted themselves to the sacrament of marriage.
Maritza Roman-Pavajeau, associate director for Marriage Enrichment and Parenting Education at the Family Life Ministry office, said these couples exemplify what the Golden Jubilee is all about.

“The great values of sacrifice, self-donation and forgiveness need to be present in a marriage. Living with this grade of faithfulness, we also assure our way to heaven!” she said.

Roman-Pavajeau, who is also a marriage coach and consultant with 18 years of experience working with the Archdiocese, added, “It is the perfect example of personal sanctification and also a great sample of the mission of the domestic Church in the world.”