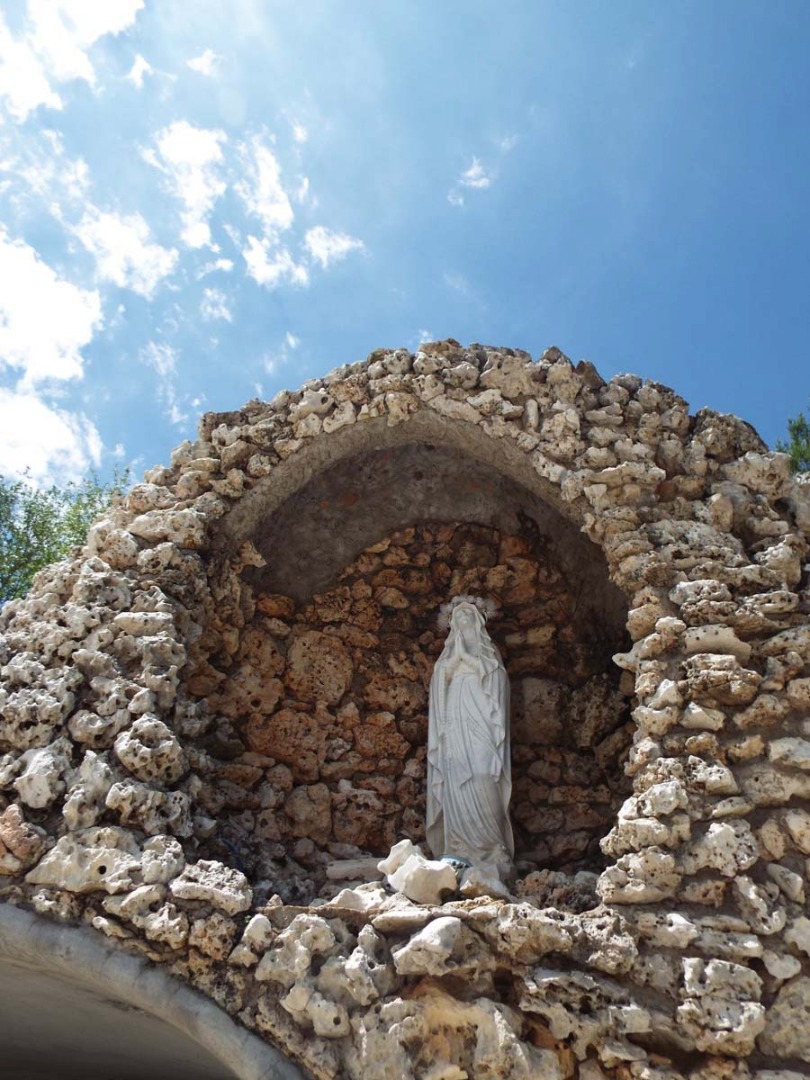 The grotto was made in 1949 in thanksgiving for for those who served in World War II and survived to return home. Photo by Jo Ann Zuniga/Herald.

FRYDEK — “My uncle Eddie Mlcak was a pilot in World War II and was shot down over Germany and became a prisoner,” said Henry Mlcak as polka music played at St. Mary’s Catholic Church in Frydek for its 68th Annual Grotto Celebration April 30.

Yet his Uncle Eddie, as well as his father and three other Mlcak relatives all safely returned home along with a total of 65 young men, known as the Frydek 65, who left this small town near Sealy to serve in WWII. Parishioners at St. Mary say it’s a miracle that that each of the men made it back alive in 1949.

To this day, the town settled by Czech immigrants in the mid-1800s continues to celebrate on the last Sunday in April with a spring gathering around a grotto. Constructed out of limestone and built by parishioners on the church grounds, the grotto honors of Jesus and Mary for the blessing of their families’ return.

Parishioners Albert Sodolak and his son Brian help organize the annual celebration. Albert remembers when his older brother Ludwig returned from the war as one of the Frydek 65. Ludwig was a mountain soldier trained in cross-country skiing to track the enemy through snow. Hauling heavy artillery on mule packs through the Italian mountains, the journey was not an easy overseas assignment.

As a young teen, Albert wanted to honor the blessing of having his brother back and followed the guidance of the local parish priest at the time, Father Lad Klimicek, to build the grotto.

“I helped build the grotto because I missed my brother and was glad to have him back,” Sodolak said. “In this little farming community back then, parents depended on their sons to help them.”

Now live polka bands, racks of homemade kolaches and barbecue, and a live auction are among the festivities. Current pastor Father Thuy Nguyen understands the repercussions of war throughout the generations.

A war refugee himself, Father Nguyen said “I would not think 32 years later after leaving Vietnam in a fishing boat, I would be here with you at this Grotto celebration” in his April 30 homily, reflecting on the Road to Emmaus.

His father worked for the U.S. government in Vietnam and was killed by the Viet Cong. As a boat person, Father Nguyen spent two years in a refugee camp in Thailand before making his way to Houston and becoming a priest. He now serves both St. Mary—Frydek and Guardian Angel Catholic Church in Wallis.

“It would have scared me back then, but Jesus is with us on our road to Emmaus. He accompanies us on the journey of life and we recognize Him in the breaking of the bread,” the priest said, intertwining the generations of families celebrating the Grotto and all it symbolizes to the community.