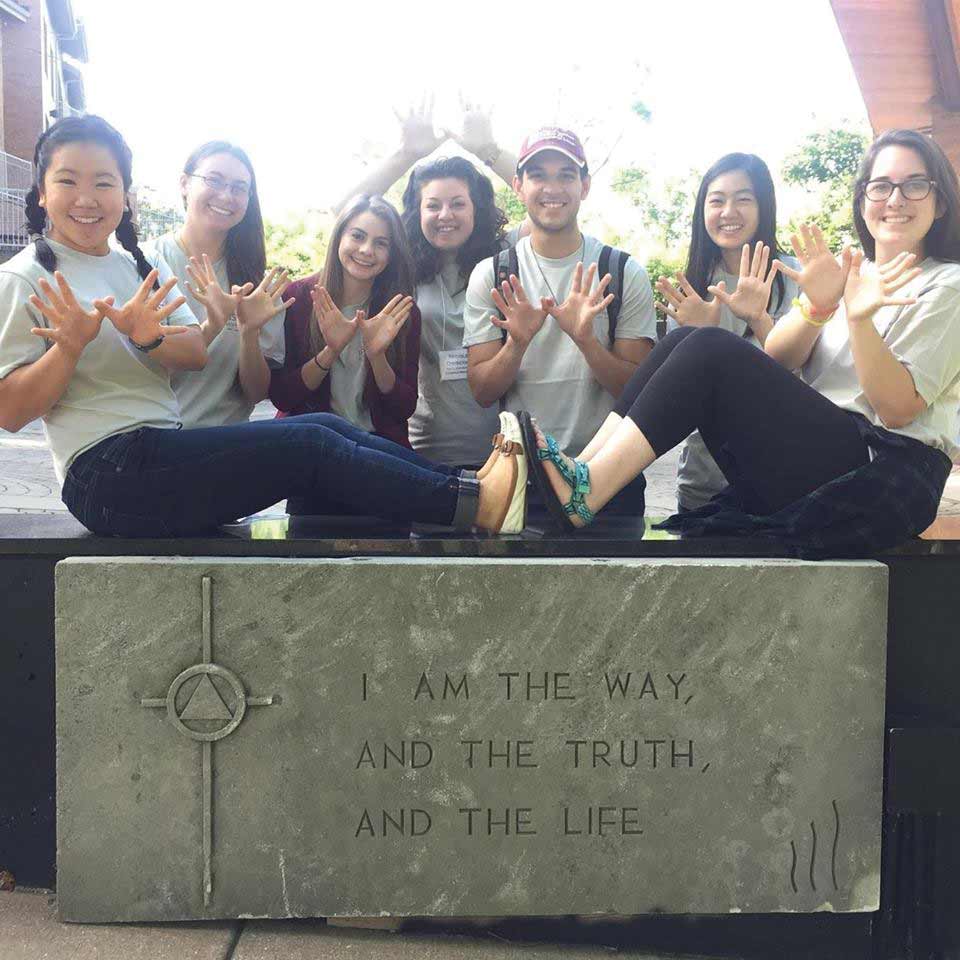 HOUSTON — When Hannah Krusleski and Rachel Ngo arrived on campus as freshmen at Rice University three years ago, one of the first things they sought was the Newman Center.

They found a home at St. Mary’s Chapel and Rice University Catholic Student Association, and over the next three years they became more involved in the association, taking on leadership roles, culminating in their being nominated as co-presidents of the association for the coming school year.

So, it was welcome news when they and five other students learned they would be able to attend the five-day Campus Leadership Formation Program in June in Louisville, Kentucky, thanks to a $10,000 grant from the Shepherd’s Cup Charity Golf Classic held each October.

“We are so grateful for the support we have received,” Krusleski said. “Going to Rice — it costs a lot of money. Having this paid for, it meant we didn’t have to worry.”

The conference provided a venue to share ideas and strategies with other students from across the country and for the Rice group to come up with an action plan for a campus ministry that would offer more support and activities for students, especially freshmen, to demonstrate their faith.

Planned for the coming school year are small faith sharing groups that will meet each week and large group activities once a month, along with a social media campaign and a daily schedule of activities for freshmen during the university’s welcome week.

This kind of outreach to young people is exactly the kind of thing the Shepherd’s Cup was created to support.

Funds from last year’s golf tournament, which included a live auction item, wine pull and raffle, netted $230,000. Half the funds went to St. Mary’s Seminary, while the rest was distributed through grants to support Catholic education and faith and clergy formation.
Father Trung Nguyen, rector of St. Mary’s Seminary, said the seminary is always in need of an injection of funds. St. Mary’s not only trains priests but also has the largest permanent diaconate program in the country,

“There are different needs in any given year, and we have to prioritize them,” Father Trung said.

The funds from last year’s tournament will be used to bolster Spanish lessons and the accent reduction courses, enhance the music program, with the purchase of a piano and additional music, buy vestments for the seminarians and for seminarian outreach at the University of Houston-Downtown.

“I’m very grateful for the generosity of the Shepherd’s Cup participants which allows us to address the more practical needs of the seminary,” Father Trung said. “Right now our seminary is vibrant and thriving, so we can offer the best formation and attract talented priests.”

In the past, Father Trung said the seminary used Shepherd’s Cup funds to buy mattresses for the priests, install Wi-Fi and go towards any number of educational programs. And with the $10 million infrastructure project underway, he said the seminary’s needs are a constant.

In Galveston, had it not been for the $6,500 grant Holy Family Catholic School received from Shepherd’s Cup funds, the school, which serves many low income families, would have had trouble raising the funds to pay for a program to combat bullying, according to principal Rita Hesse.

Hesse said the school had experienced issues with bullying — much of it cyber bullying that generally happened outside of school, but nevertheless affected students.

“What we were seeing was behavior we didn’t want our children to exhibit at all,” Hesse said. “We wanted to have something strong and powerful to present to our students.”

In May, the school hosted Rachel’s Challenge, an anti-bullying program named for Columbine High School massacre victim Rachel Scott that promotes kindness and respect, offering presentations and materials for ongoing education and training.

The program for Holy Family, which serves about 112 students in prekindergarten through eighth grade, included three presentations — one for elementary students, another for middle school students and an evening one for parents and the community, plus materials for follow up training for teachers.

“Our community really needed this,” Hesse said. “We are so grateful and appreciative of the Cardinal for furnishing this grant for us. It’s not something we could have actualized.”

Tee off is at 11 a.m. with registration starting at 9 a.m. Teams with all players from the same parish are eligible to compete for the 2017 Shepherd’s Cup Parish Champion Trophy. Presented by Galveston-Houston Knights of Columbus Charities, Daniel Cardinal DiNardo’s annual tournament, now in its 10th year, raises funds for Catholic education, faith and clergy formation and St. Mary’s Seminary.

Festivities include an awards dinner and live auction. Sponsor packages are available from $250. To be a sponsor, to register a team or to volunteer, visit www.shepherdscup.org. To volunteer, contact Brandy Snipp at brandy@brandsnipp.com.