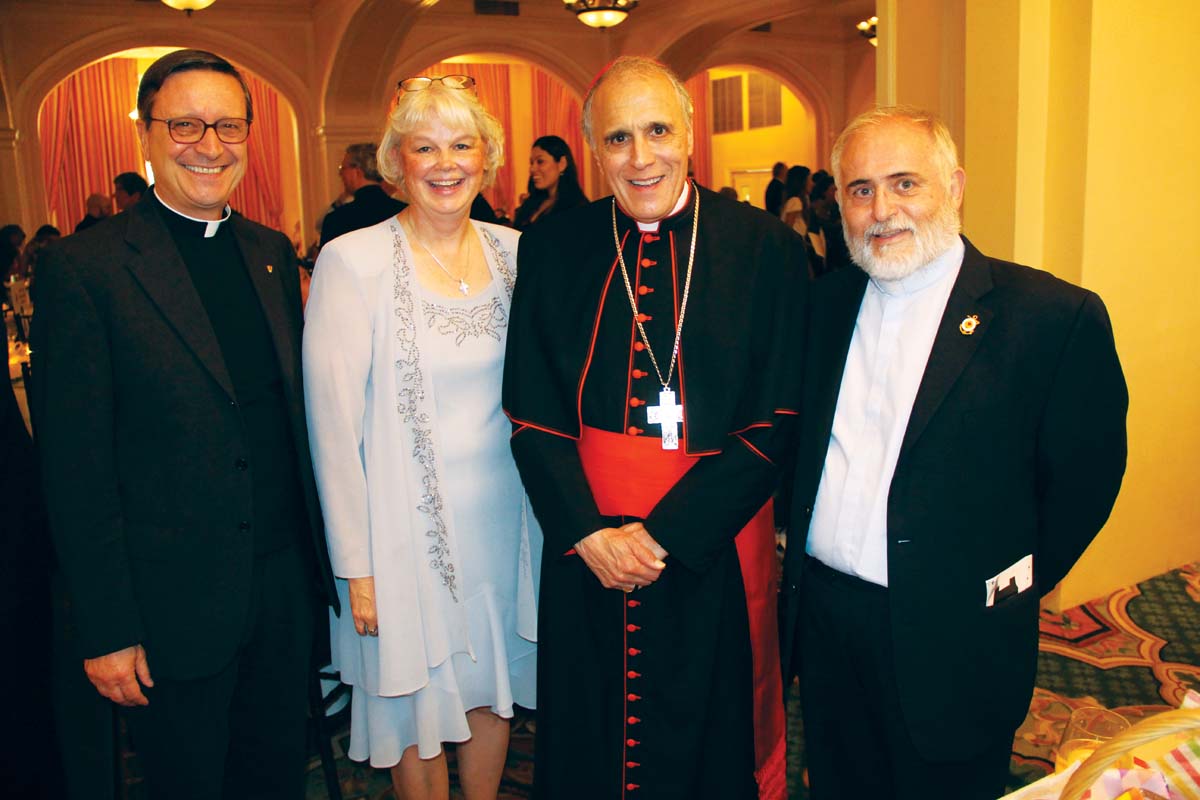 GALVESTON — The Port of Galveston has not only been a great source of employment and strength in the Galveston economy for nearly two centuries, it has also been a place of grace, blessing and service by the Church.

On Aug. 12, the Galveston Seafarers Center honored the Archdiocese of Galveston-Houston for 178 years of ministry on the Galveston docks at the center’s annual Gala.

Among those attending the gala were Daniel Cardinal DiNardo, Auxiliary Bishop George A. Sheltz and Father Italo Dell’Oro, CRS, vicar for Clergy and secretariat director for Clergy Formation and Chaplaincy Services for the Archdiocese.

Father Bruno Ciceri from the Apostleship of the Sea (AOS) office in the Vatican was the gala’s special guest. Father Clint Ressler, pastor of St. Mary of the Miraculous Medal in Texas City, and Father Jude Ezuma, pastor, and Father Stephen Payne, parochial vicar, of Holy Family Parish community in Galveston were also in attendance.

Father Ciceri presented Cardinal DiNardo and the Archdiocese with a “Apostolatus Maris” recognition from AOS International.

“The lives of seafarers in the maritime industry is very difficult,” Cardinal DiNardo said. “They transport the goods and take care of the ships. The Seafarers Center is such a refuge for them, a place where they can get practical things done. From (using) computers, to getting some food and simple clothing, whatever it may be. You come to the Seafarers Center and you are welcomed with care and a smile, concern and action. That is what is happening there and we at the Archdiocese are very proud to be a part of that.”

In defining the role of the Seafarers Center, Cardinal DiNardo cited the Gospel reading from that weekend (Mt 14:22-33) about Jesus walking on water and bidding Peter to come to Him. (“Sheer happenstance,” Cardinal said, in reference to the timing of the Gospel’s nautical theme.)

“I oftentimes wonder if there are seafarers who pull into Port in Galveston and for various reasons, might be afraid,” the cardinal said. “It is my thought that when they pull in and hear the name of the Galveston Seafarers Center, that whatever fears they have, they may feel themselves being pulled up out of the water, out of their cares and anxieties, out of the storms of what might afflict them.”

In reference to the Seafarers Center, he added, “For all that you do to ‘lift many Peters’ who are around from the water and give them renewed grace and strength in the midst of anxieties and fears, thank you very much. That we can be a part of it in the Archdiocese is a great grace for us.”

Archives at the Archdiocese show the earliest priests assigned to the island in 1839 also ministered to the seafarers aboard the ships coming into port. The ministry continued throughout the years, joining with ecumenical partners to eventually form the United Ministry to the Port of Galveston Inc. — aka the Galveston Seafarers Center in the mid-1970s.

Karen Parsons, OFS, has been the Archdiocesan port chaplain in Galveston and Texas City for 25 years. She also ministers to the fishers and shrimpers in Kemah, San Leon, Dickinson, Texas City, Galveston and Bolivar. Through her experiences, she is well aware of the challenges and injustices often confronting seafarers away from home — and helping them through humanitarian and spiritual care and assistance.

“Persistence and determination are two words that describe port chaplains,” Parsons said. “We are not a usual breed. We don’t give up easily. We wear hard-toed boots and dig our heels in when things are wrong. And we go after and help (seafarers) and love them. And they know it.”

AOS, the Catholic Church’s official ministry to the People of the Sea, was established in 1920 by the Vatican.

Today there are AOS chaplains all over the world. In the Archdiocese of Galveston-Houston, there are four full time port chaplains: three in Houston and La Porte and one in Galveston and Texas City.