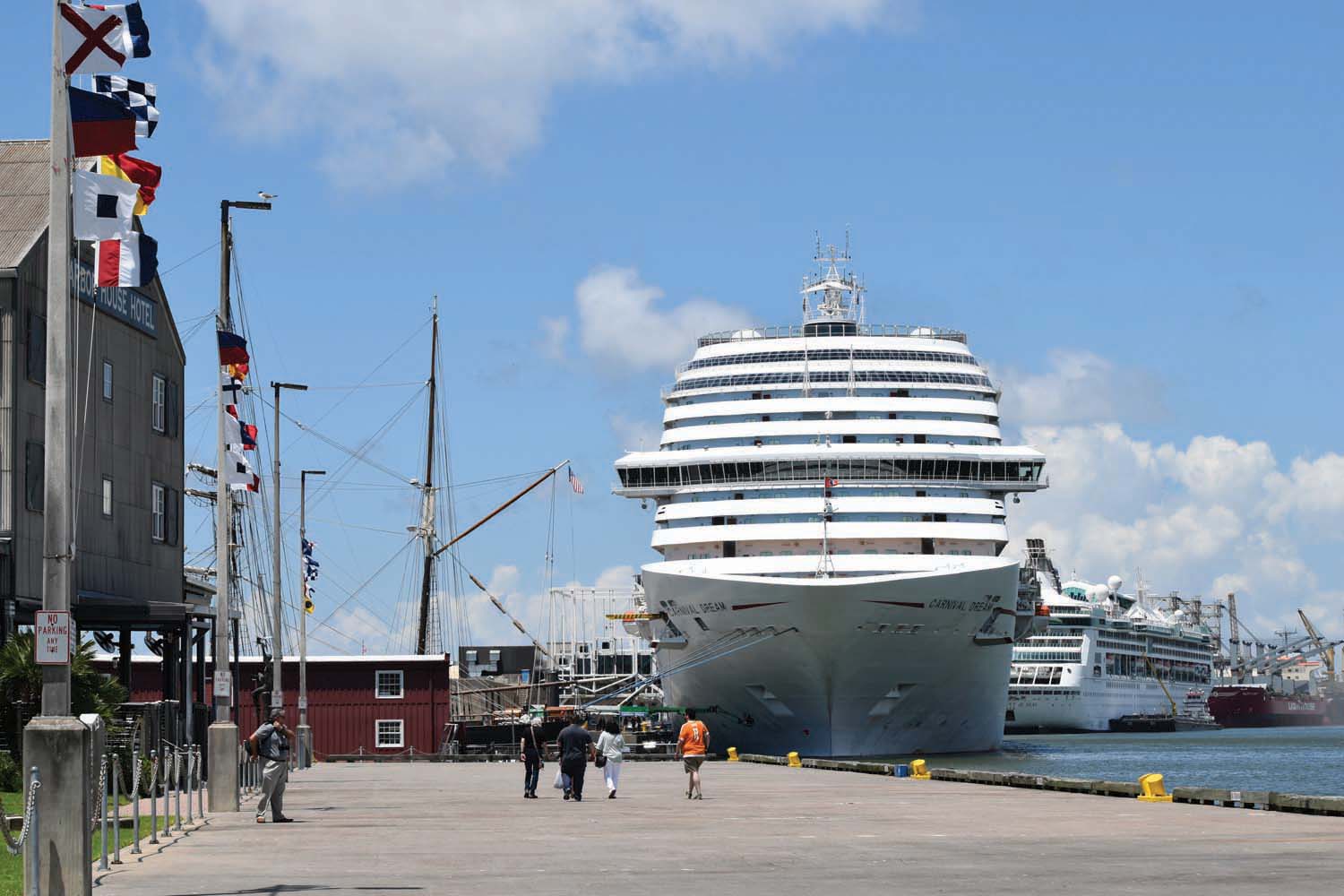 Two large cruise ships and a cargo ship are seen in the Port of Galveston on July 8. The Seafarers Center of Galveston, led by Port Chaplain Karen Parsons, flooded during Hurricanes Harvey and Ike. Parsons own home flooded during Harvey in 2017. (Photo by Catherine Viola/Herald)

GALVESTON — At first, everything seemed OK. But when the rain soon splashed over the curbs of Karen Parsons’ street in her League City neighborhood, she grew worried.

Just in case, she and her husband put some sandbag barricades between their front and back doors to block any water that might reach their doorsteps.

While the family television flashed images of significant flooding across the region, Parsons watched her front lawn fill like a bathtub. Still, their neighborhood seemed to be all right.

This house has never flooded, her husband said, something similarly uttered by thousands across the Texas Gulf Coast that same day. Still, she was unsure.

It was getting late, so Karen anxiously decided to brush her teeth, perhaps a reach for normalcy in the increasingly tense, chaotic situation that was Hurricane Harvey slowly grinding over Galveston-Houston.

Suddenly, Karen found herself splashing in ankle-deep water in their bathroom. After hearing her cry out, her husband, who was across the house, also found their kitchen filled with floodwaters. Even though the water hadn’t come through the doors like a polite visitor, it snaked its way into their home through the house’s weep holes.

Quickly, the couple dragged as much of their belongings to the second story of their house, saving what they could.

As Hurricane Harvey stalled over the Archdiocese and much of the Texas Gulf Coast, it dumped record-breaking rainfall, reaching more than 50 to 60 inches in some parts. The catastrophic storm was the second-most costly hurricane in U.S. history. That devastation was felt far and wide across the Archdiocese, but it wasn’t new to Parsons. 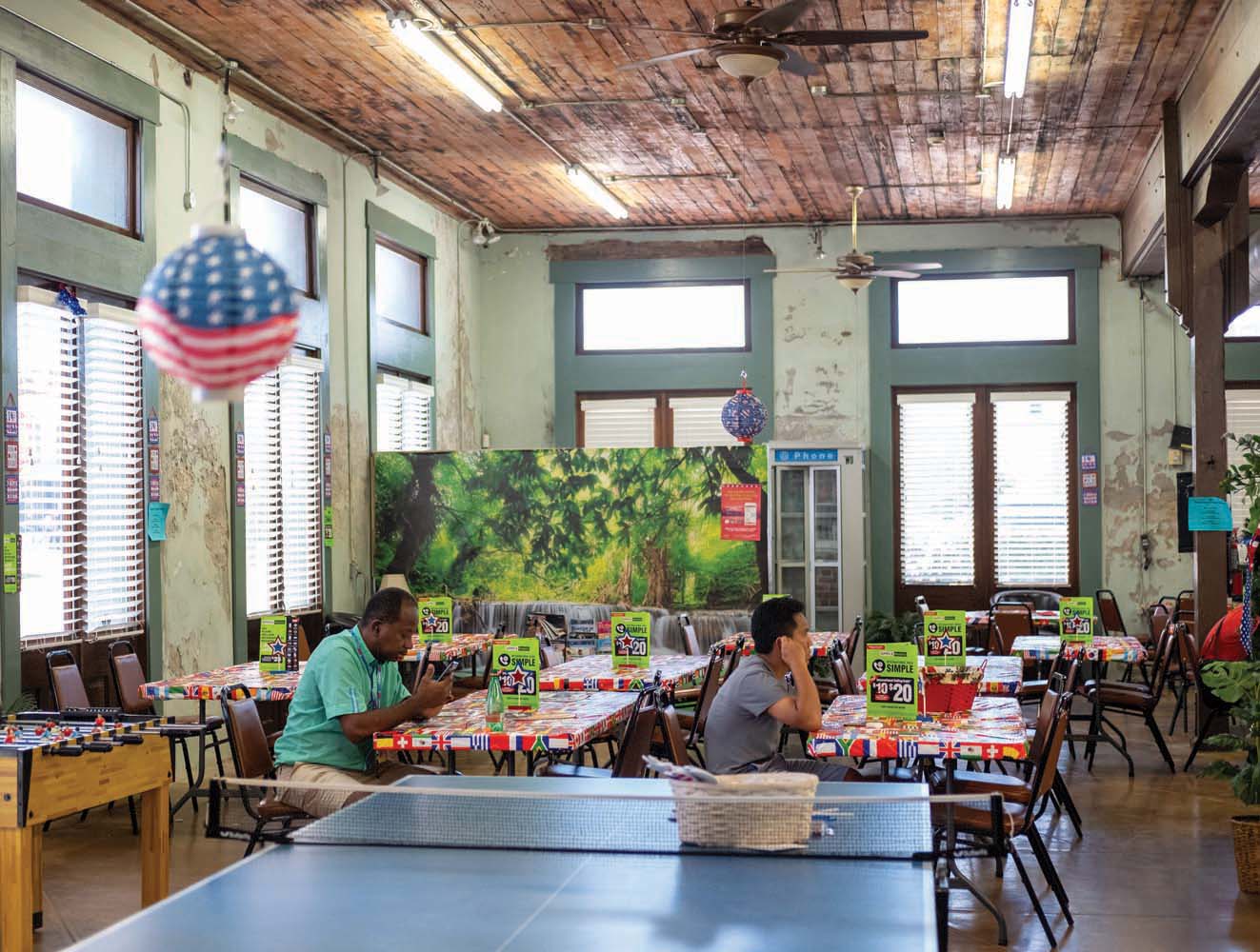 On Galveston Island, Parsons leads the Galveston Seafarers Center, a port ministry of the Archdiocese that supports those working at sea on cargo ships, including seafarers, fishers, dock workers, maritime industry workers and their families.

Just over a decade ago, Hurricane Ike made landfall on Galveston Island on Sept. 13, 2008, bringing with it a storm surge of seven to 12 feet. The surge destroyed the Seafarers Center and the historic St. Mary’s Cathedral Basilica, both located just blocks from the island’s popular Strand Historic District. At least four feet of water covered Bolivar Peninsula, records show.

The center offers a crucial ministry to those working at sea for months at a time by providing a quiet, comfortable space to relax, contact family back home and rest while in the Port of Galveston.

Even though Ike destroyed much of Parsons’ headquarters at the Seafarers Center, including more than 20,000 letters from decades of ministry with seafarers and their families to Ike’s surge, Parsons continued her ministry unfazed in the days after Ike. With no place to run her ministry anywhere on the Island after Ike’s battering storm surge, Parsons worked out of her car.

She often advocates for seafarers who experience discrimination based on creed, nationality or health status while at sea, working with local U.S. Coast Guard and authorities to facilitate assistance.

Unlike during Ike, when Parsons lost just her ministry’s home, Harvey’s unending rains slashed her own home and, again, her ministry. But this time, the center only saw 10 inches of water, making for a quicker three-month recovery and repair. But her home and her work were wrought with reminders of either storms’ damage; she had no escape from the floodwaters’ reckoning.

Because of Harvey’s sheer mind-boggling magnitude, Parsons’ home took 17 months to rebuild. Harvey flooded at least 185,000 structures and homes like Parsons’ in six of the 10 counties in the Archdiocese, including devastating four Catholic churches, two Catholic schools, and severely damaging dozens of other parochial and religious communities.
Parsons said God carried her and her family throughout the back-breaking mucking process.

“He was holding my knees up when I wanted to just collapse on the floor and just cry and cry and cry,” she said, two years after Harvey’s landfall anniversary on Aug. 25.

“He sent strength, courage and grace through people who came and help,” she said. “Just always knowing that no matter how bad it gets, God is always there to help you throughout.”

During the renovation, a dozen Coast Guard members showed up to help her rip out and clean up her house. Those who flooded themselves were turning out to help others who also flooded, she said; a story that played out across the Archdiocese from Dickinson to Conroe.

Things are different after the storm, Parsons said. Those who flooded during Ike and Harvey said it’s the subtle realization that they’ve lost something they didn’t realize was taken during the storm.

“You’ll never see it again,” she said. “A certain book, a photo album, or a letter from someone who’s no longer with you; I know they’re just things, but they’re a part of your life.”

While preparing for the Seafarers Center’s Sept.14 gala fundraiser, Parsons recalled a memory from Ike.

A month after Ike slapped the Island, she received a package addressed to her and her family from Bulgaria full of non-perishable goods. Six years ago, Parsons worked to help save a seafarer who was starving on a ship because he was being discriminated against. She was able to feed him and get him off the ship to send him home to safety in Bulgaria.

In tears, Parsons realized the package was from the Bulgarian seafarer’s wife, who had heard the Seafarers Center was destroyed. The wife had sent her food to make sure Parsons own family was fed.

“That’s God right there,” Parsons said. “[He’s] working six years later, the seed was planted and his beautiful fruit came after that.”