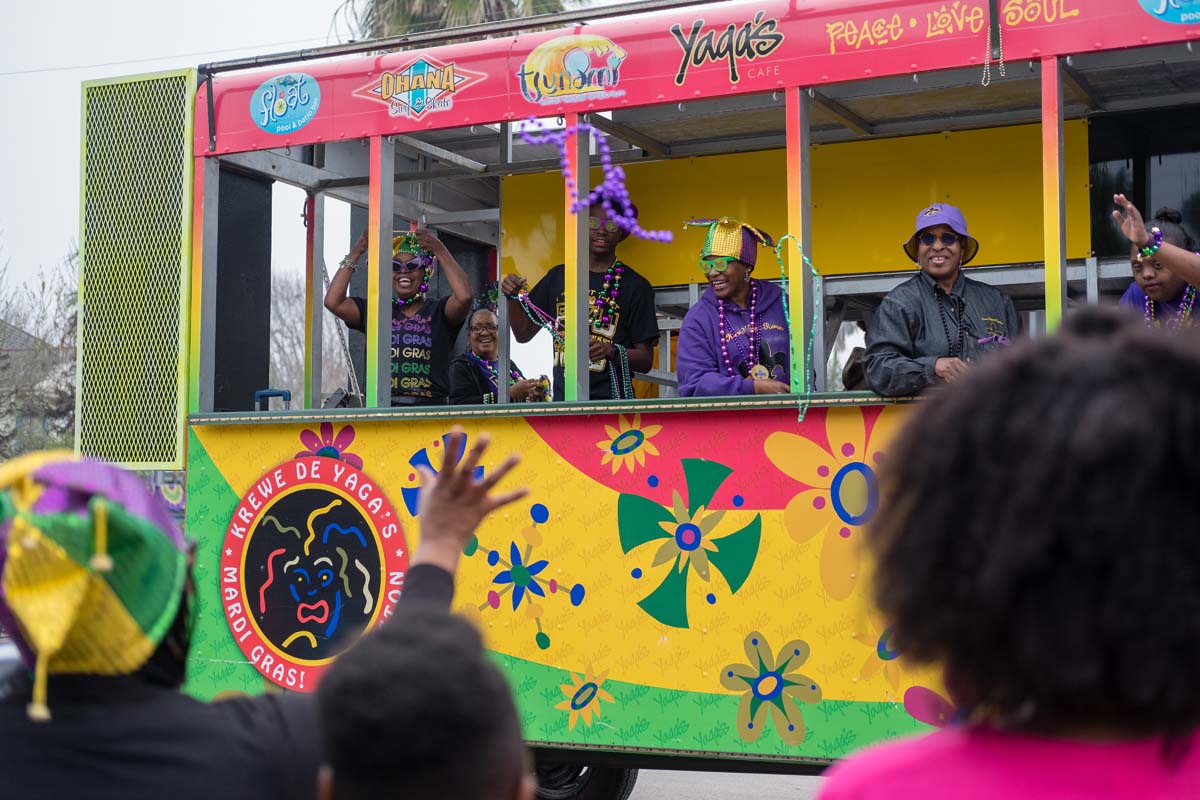 Members of the Krewe d'Esprit Rosaire Mardi Gras Parade throw beads from a float on March 2 in Galveston, Texas. The krewe primarily consists of parishioners from Holy Family Parish of Galveston and Bolivar. Photo by James Ramos/Herald.

GALVESTON — The bright colored beads around Father Jude Ezuma's neck looked a lot like a rosary, but on the morning of March 2, the beads signaled a different type of celebration: Mardi Gras on Galveston Island on the Texas Gulf Coast.

Sitting atop his motorcycle, Father Ezuma, pastor of Holy Family Parish of Galveston and Bolivar, pulled on his helmet and drove into his lead position as grand marshal of the Krewe d'Esprit Rosaire Mardi Gras Parade. Holy Family parochial vicar Father Stephen Payne, who sat in a less zippy black SUV, served as co-grand marshal.

For the island's first parade of the Saturday before Mardi Gras, or Fat Tuesday, the group keeps the tradition alive of being the only African-American Catholic krewe in Galveston. A “krewe” is an organization or association responsible for hosting a parade or carnival celebrations.

The parade was part of the 108th celebration of Mardi Gras on Galveston Island, joining 21 other parades that roll throughout the island, located 45 miles southeast of Houston. Mardi Gras was March 5 this year.

The Krewe d’Esprit Rosaire embraces its African-American Catholic history, offering area high-stepping marching bands and drill teams the chance to perform and highlight their popular showmanship skills that reflect those found at historically black colleges and universities. The krewe hosts a popular battle of the bands contest prior to the parade.

At its midway point, the parade reached the Galveston seawall, facing a misty Gulf of Mexico.

While the krewe’s roots began at Holy Rosary Catholic Church, now part of Holy Family Parish, the group is open to anyone interested in contributing to the annual event, which prides itself as a family friendly celebration. The parade actually rolls past Holy Rosary Church, one that has long served the African-American community on the island.

Larnell Mitchell, an officer with the parish’s Knights of Peter Claver council, said the parade is a continuation of Black Catholic history on the island.

“It's more of a sense of pride of true Catholicism from on the island,” he said. “And of course a recognition of the role that we've played in the history of Catholicism here in Texas as Black Catholics.”

He noted how many children like himself were served by the Catholic sisters, like the Dominicans, the Holy Family Sisters and Congregation of the Sisters of Charity of the Incarnate Word, who came to Galveston Island to teach. Many sisters stayed even after the devastating hurricane of 1900 that decimated the island. During that storm, an orphanage and hospital founded by Catholic sisters to minister to those in need was swept away by the major storm surges.

Parade captain Valerie Clouser McHenry said while the krewe itself has 33 members, with most members being Catholic, it’s become a major event in its 24-year history. The parade still rolls by Holy Rosary Church celebrate the community that helped it to grow. She said the krewe’s name reflects its origin at Holy Rosary Church, with the parade’s origin coming from the parish pastor in the 1990s. The parade also purposely leads with the parish priests as grand marshals to honor their faith, followed by the ROTC color guard bearing the national and state flags.

Members of the krewe said many turn out for the parade from across the Galveston-Houston Archdiocese, one noting she threw some beads at some parishioners from northeast Houston earlier that morning on her way to the floats.

“[The parade] brings everybody out,” said Valerie Christian, a Holy Family parishioner and longtime Krewe member. “All types of people. Everybody's excited about just seeing everything. The festivities, the beads, the bands that come from Houston, all over. We overheard some kids saying this is their very first Mardi Gras. So, it doesn't just mean ... It's not just a big thing for Galveston, but our whole region.”

The beads, music, performances and events all strengthen the community, she said.

“It’s amazing,” she continued. “It just gives the kids just another opportunity and a platform to show their talents, to be involved. Hopefully, it'll leave that legacy behind that they'll want to continue to do this for their families and keep the community thriving and alive.”