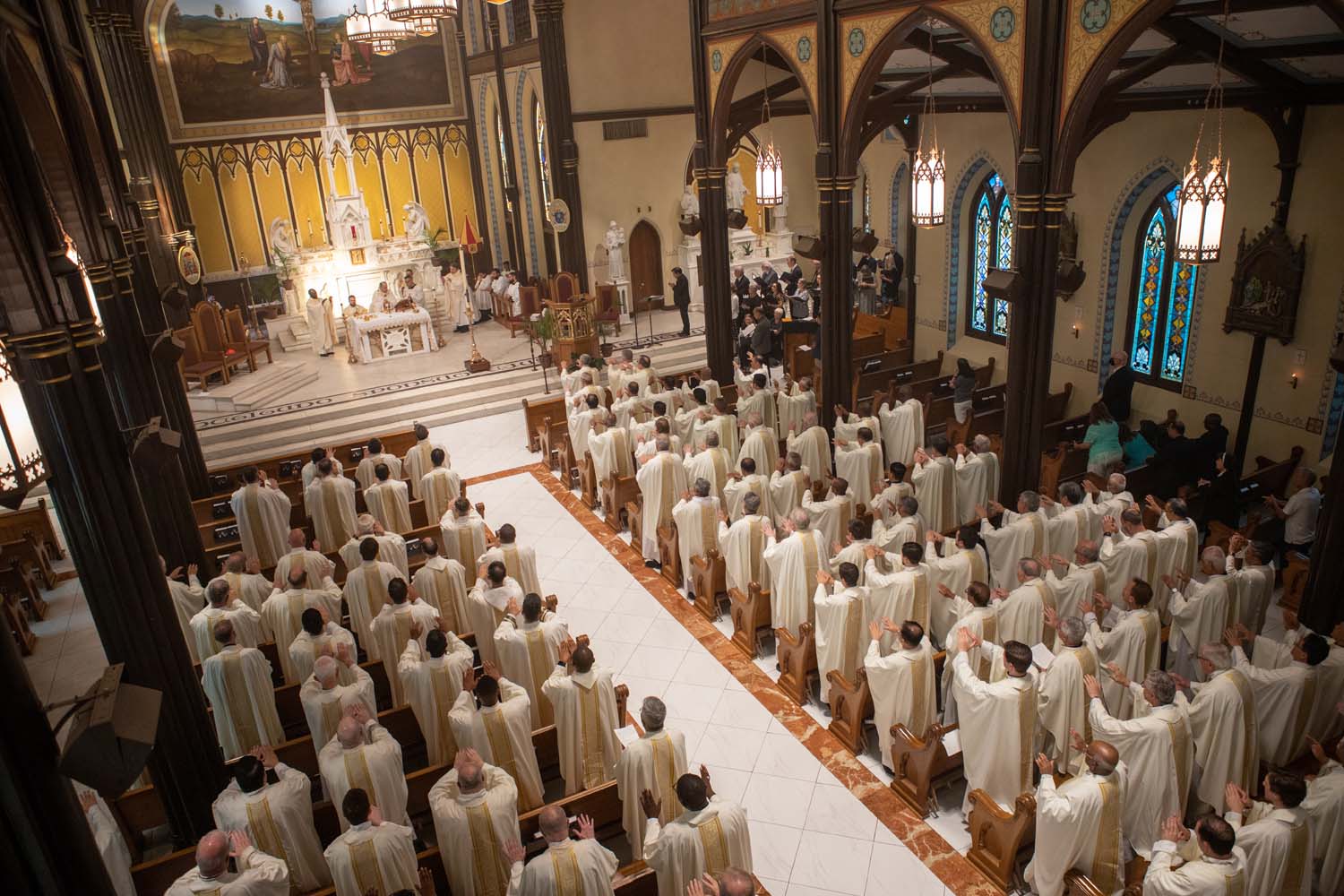 Some 160 priests from around the Archdiocese joined Auxiliary Bishop Italo Dell’Oro, CRS, to concelebrate the Mass. Daniel Cardinal DiNardo preaches a homily while presiding over a special 175th anniversary Mass at St. Mary’s Cathedral Basilica in Galveston May 25. (Photos by James Ramos/Herald)

GALVESTON — Perhaps it was no better time to pray the Memorare.

Just shy of a week before hurricane season’s arrival on June 1, and a day before the tragedy in Uvalde, Daniel Cardinal DiNardo implored his fellow priests ― more than 160 in total ― to turn to the Blessed Mother in an urgent prayer for protection from life’s unexpected storms.

Cardinal DiNardo celebrated a special Mass at St. Mary’s Cathedral Basilica in Galveston on May 23 to signal an official opening of the 175th anniversary of the Archdiocese of Galveston-Houston. Auxiliary Bishop Italo Dell'Oro, CRS, also concelebrated the Mass.

In his homily, he shared a brief history of the Archdiocese, which marks its 175th anniversary in 2022.
“On May 4, 1847, this little church began,” Cardinal DiNardo said. “It transformed from a vicariate into a massive territory in the diocese,” which encompassed land in Oklahoma, Colorado and Mexico, some 315,000 square miles and 20,000 Catholics.

He recalled how Bishop Claude Dubuis began ministries with just 12 priests during the creation of the diocese.

“I don’t think that anyone who lives in Texas in 1847 would have imagined what would happen to the Catholic Church,” Cardinal DiNardo said.

He lauded the “farsightedness” of Bishop Nicolas Gallagher, the third bishop of Galveston who brought many religious congregations to the diocese and opened parishes and schools for the region’s underserved and underrepresented communities during a time of tremendous growth and devastation from the 1900 hurricane that destroyed Galveston. 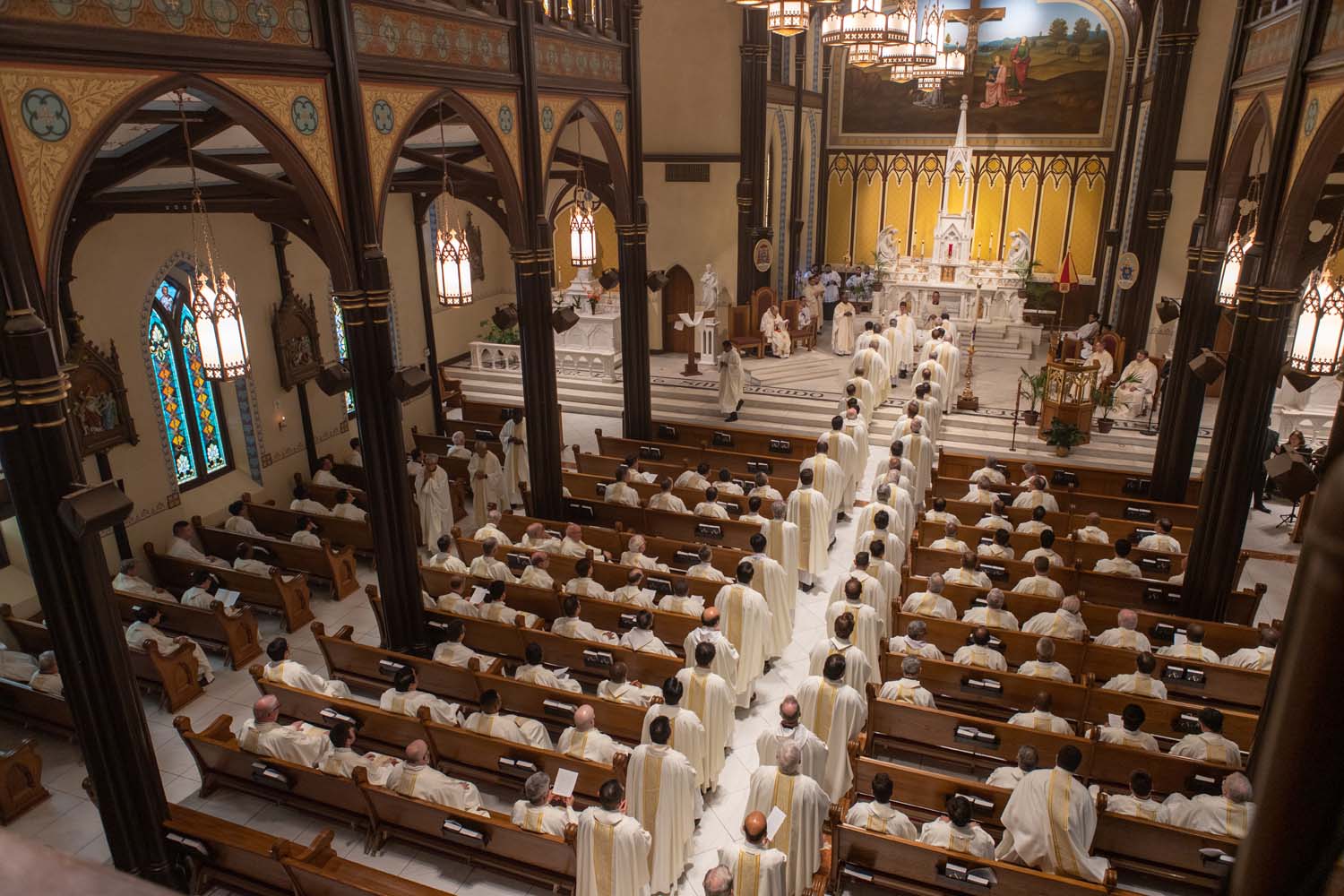 In 1886, Bishop Gallagher opened the first Catholic school for African Americans and also opened several parishes for that same community like St. Nicholas in Houston, with others in Beaumont and Port Arthur.
Cardinal DiNardo noted how Bishop Gallagher was buried in the Cathedral Basilica, perhaps a presence that continues to inspire today.

In addition, Cardinal DiNardo recalled how the diocese had prepared a large celebration for the 100th anniversary but ultimately chose to cancel the centennial events because of the Texas City disaster. It was the nation’s deadliest industrial accident and claimed nearly 600 lives, including Father William Roach, pastor of nearby St. Mary of the Miraculous Medal Catholic Church in Texas City.

Cardinal DiNardo also remembered the efforts of the Ursuline Sisters, just some of the many women religious who planted seeds of Catholic education, catechesis and healthcare in Texas and eventually the nation.

Hearts for the people

“Today, we gather in great thanksgiving for what has happened to the Church over 175 years,” Cardinal DiNardo said.

He reflected on a few keystones of the priesthood: the Eucharist, confessions and ministering to the faithful of the Church.

As a point of inspiration for priests to walk with their parishioners, Cardinal DiNardo pointed to the works of Catholic Charities who walks with families, many shattered by the horrors of war and unimaginable difficulty.

He implored the clergy to remain steadfast in strength with the Sacrament of Reconciliation, even in the face of long lines and related challenges.

“Keep your mystical heart in Jesus, and you’ll be surprised,” there will be much room there, he said.

Reflecting on the Gospel, Cardinal DiNardo said: “No branch exists alone. The branch and branches together exist as part of the body. He is that body. But Jesus has a real mystical heart and He wants us to be there. ... Do the breaking of bread well, hear confessions, love your people with a mystical heart. If we do that, maybe 150 years from now, it will all work out.”

Cardinal DiNardo closed his homily with a prayer, saying: “May the Lord entrust us all in His Church to the love of the Father, through the mystical heart of Jesus and ... unite our hearts with the Holy Spirit.”

A few days later, Cardinal DiNardo and Bishop Dell'Oro attended a May 27 Galveston City Council meeting as invited guests to receive the city's proclamation celebrating the Archdiocese's 175th anniversary. Cardinal DiNardo also gave the invocation at the beginning of the council meeting. Several members of Galveston's Catholic communities attended to witness the occasion. 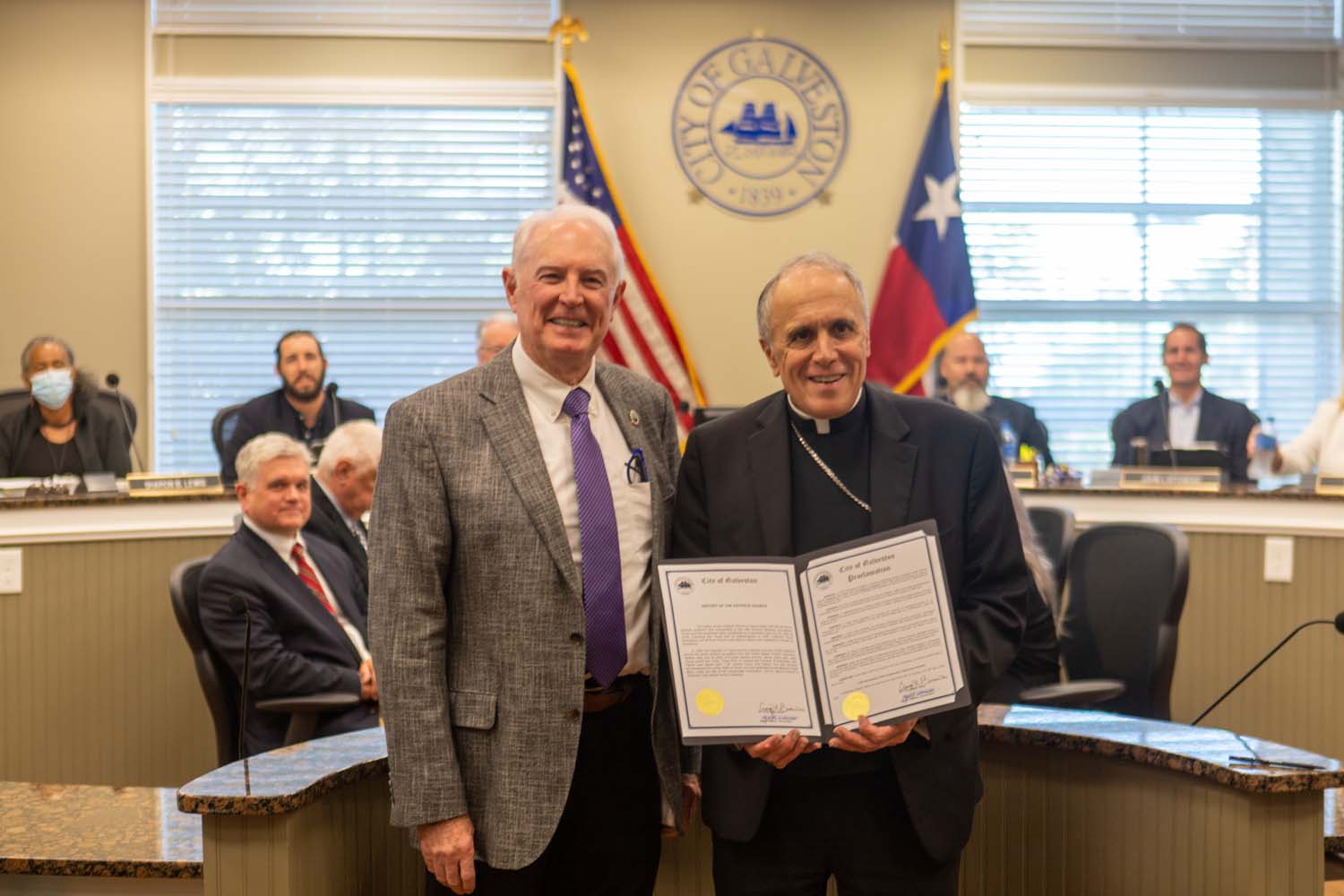 Following the public reading of the proclamation by Galveston Mayor Craig Brown, Cardinal DiNardo shared a few words of encouragement, thanksgiving and prayer.

"Mayor to you and the city council, to all the good people of Galveston, this is also a great honor for us," he said. "We're delighted, we're grateful."

Cardinal DiNardo also said "we’re glad to do our work." He noted the origins of the Archdiocese that began in the city and called St. Mary's Cathedral Basilica, which was devastated by Hurricane Ike, a "jewel in the Archdiocese."

For more about the 175th anniversary of the Archdiocese of Galveston-Houston, visit www.archgh.org/175.