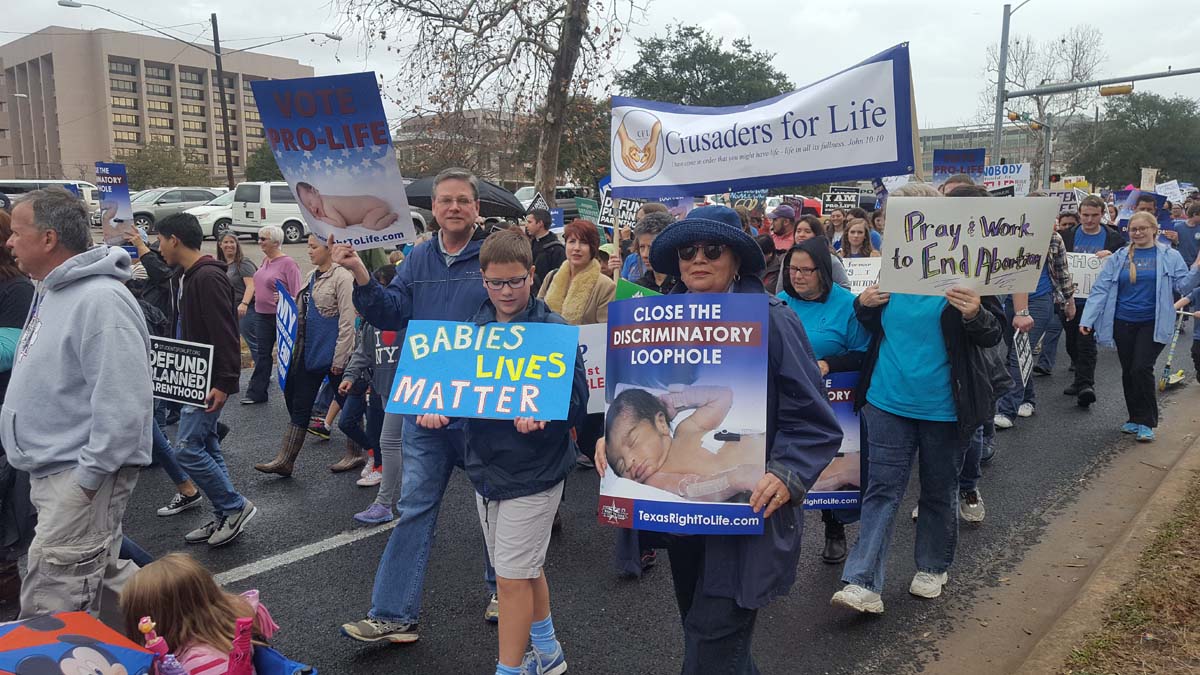 Between 550 to 750 from the Archdiocese joined thousands for the Texas Rally for Life at the State Capitol and Texas Catholic Pro-Life Day in Austin Jan. 27 to promote the dignity of all human life. Photo courtesy of the Office of Pro-Life Activities.

AUSTIN — Thousands by the bus-load took to the state’s capital for the Texas Rally for Life Jan. 27 to raise the flag for the unborn and commemorate the 45th anniversary of the tragic Roe v. Wade Supreme Court decision in 1973, which made abortion legal throughout all nine months of pregnancy.

“The Texas Rally allows us to come together as a wider community: beyond our individual parish, school, diocese or faith group,” said Julie Fritsch, director of the Archdiocesan Office of Pro-Life Activities who coordinated much of the Archdiocese’s efforts. “The event is inspiring, not only in demonstrating the strong support that exists for pro-life issues, but also because it allows participants to meet people outside their immediate communities and stand together in a common cause.

Approximately 700 attended from the Archdiocese, with nine buses ferrying parishioners and dozens of vehicles from at least eight parishes like St. Mary Star of the Sea, Christ the Good Shepherd, Notre Dame, Prince of Peace and others, according to Fritsch. Several schools also attended including Frassati Catholic High School, Incarnate Word Academy (IWA), Rice University and the University of Houston.

IWA Campus Minister Kim Valdez said her students approached her about going to the Rally.

“[The trip] was initiated by the students because they want to be a voice for the voiceless,” she said. Nearly 20 IWA students and chaperones attended the Rally “to be the hands and feet of Christ as a witness to the world.”

The trip offers students a chance to connect their education to real life, according to Valdez.

“We take students because it is part of our Catholic identity as a school to promote life at all stages. It gives our students the opportunity to take what they have learned in the classroom from the head to the heart.”

With banners, flags, signs and more, the Rally began at 17th Street and North Congress Avenue and marched 17 blocks through the downtown city streets to the State Capitol, ending with a rally on the south steps of the Capitol.

While some of the students were nervous to attend, Valdez said “they were attentive and inspired just by the masses of people that were marching for the same reason they were. After the rally they were reflective. We walked over to St. Mary’s Cathedral for a moment of prayer and all students took a moment to reflect and pray on the events of the day.”

Held for the first time this year, the Austin Diocese hosted the Texas Catholic Pro-Life Day alongside the annual Rally. The day began with a prayer vigil to end abortion outside a Planned Parenthood location in Austin, followed by several Divine Mercy Chaplet prayer vigils led by young people and Masses at parishes in the area celebrated by Bishop Vasquez and Austin Auxiliary Bishop Daniel E. Garcia.

For IWA Senior Mikayla Herreth the Rally brought her both “a joy and a sadness that [she] truly cannot express.”

“I am glad I had the opportunity to attend a rally that peacefully protests the decision of Roe v. Wade, but it brought me overwhelming heartache that I had to be there at all,” she said. The diversity in the crowd, “the hundreds of posters, tens of chants, numbers of speakers, hundreds of communities from churches and schools all around Texas — all in one place representing a movement,” motivated her and her classmates.

“No person is a stranger,” she said. “No one is afraid to speak to the person marching next to them. The community is nothing but thousands of smiling faces.”

Herreth and her classmates trekked through pouring rain on the drive to Austin, but were greeted with a clear sky and sunshine as they marched and arrived at the State Capitol.

“We have no right to tear others down, but each person does have a right to life,” she said. “With each right comes a duty, and we have the duty to protect others who cannot protect themselves.”

Valdez said she is inspired by her students like Herreth, many who still went to the Rally the night after their school’s annual winter formal. “They stand for what is right and what they believe, even when it is not popular.”