Galveston-Houston parishes join seminaries in praying for reparations, healing for the Church 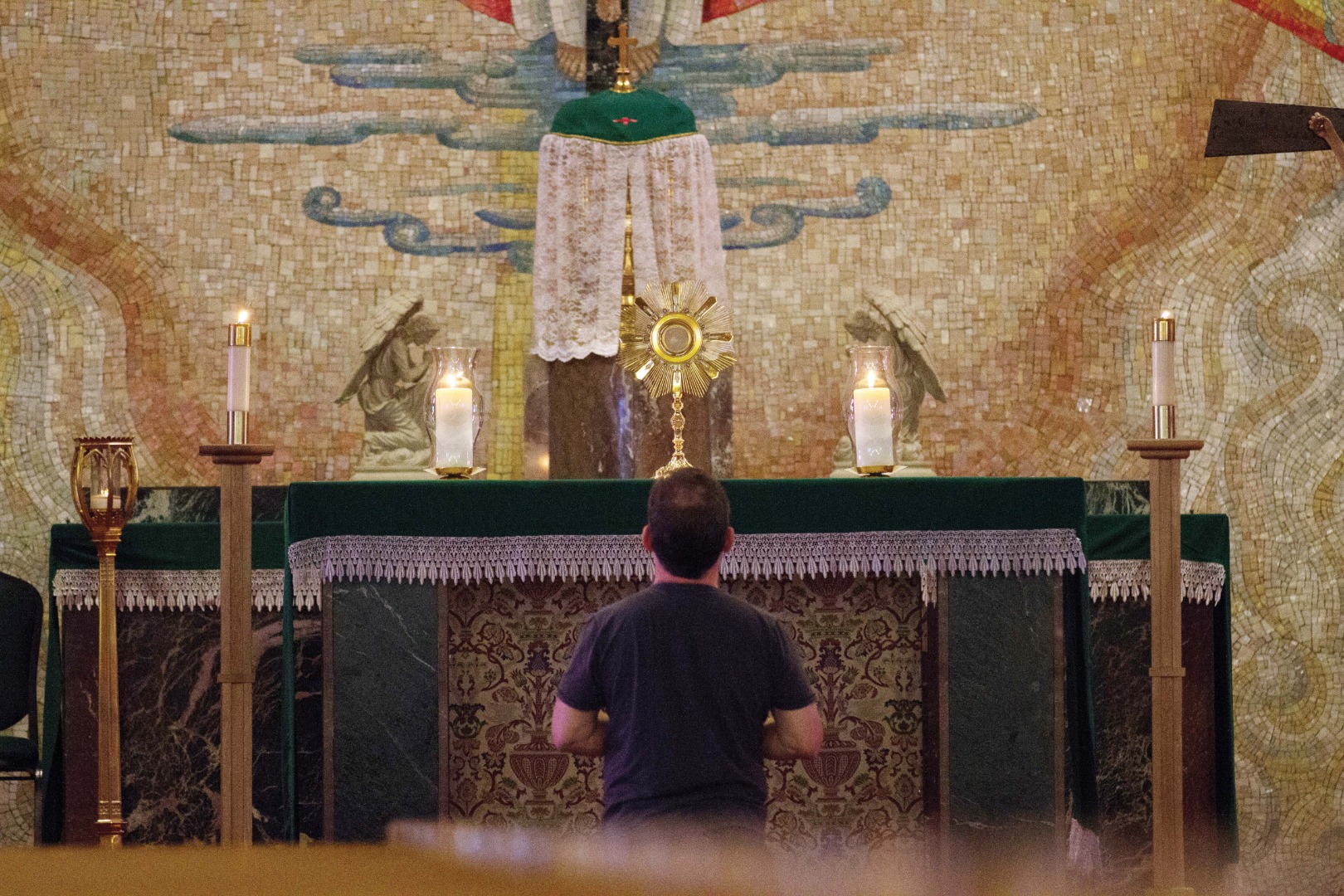 A man prays before the Blessed Sacrament at St. Christopher Catholic Church in Houston. Throughout the Archdiocese, parishes are answering the pope’s call to pray for the Universal Church, through prayer services and Mass seeking reparation in the midst of sexual abuse scandals. Photo by James Ramos/Herald.

HOUSTON — Pope Francis has asked for prayer from Catholics, especially in light of the sex abuse scandal and the resulting backlash, and has now invited “all the faithful, of all the world, to pray the Holy Rosary every day” in October, the month of the Marian prayer.

“Join in communion and in penitence, as the people of God, in asking the Holy Mother of God and St. Michael the Archangel to protect the Church from the devil, who always seeks to separate us from God and from each other,” the Holy Father said.

The Pope asked the faithful to conclude the Rosary with the ancient invocation “Sub tuum praesidium” (“We fly to thy patronage”) and with the prayer to St. Michael the Archangel.

Parishes from across the Archdiocese are dealing with the crisis in various ways, at the discretion of their pastors, while others are having Masses, panel discussions and special times for prayers and adorations.

At Sacred Heart Catholic Church in Conroe, Pastor Father Philip Wilhite said in a church bulletin to all victims of sexual abuse, “know that we are praying for your healing and are here to assist you.”

Since the release of the Pennsylvania Grand Jury Report, the parish has been holding 40 days of Holy Hours through Oct. 19 for the healing of all victims of sexual abuse and for the purification of the Church.

On Sept. 16, the parish also hosted a bilingual open forum for parishioners to express their concerns regarding the sex abuse scandal. The forum was scheduled in response to the ex-Cardinal Theodore McCarrick allegations, the grand jury report, and following local allegations involving a former Conroe priest.

According to parish staff, the forum was well attended by approximately 300 parishioners and was facilitated by parish council members. Licensed professional counselors were present to assist the parish with dealing with the difficult situation. The forum resulted in a series of recommendations for the parish and Archdiocese.

“As we continue to pray and do penance for the scandal of sexual abuse in our Church, we especially pray for the healing for the victims/survivors who have suffered much for many years,” Father Wilhite said. “May the Lord grant a complete healing to them and a restoration of the gift of faith.” Parishioners were encouraged to join a nation-wide Rosary recitation on Sept. 30 “for the conversion of our Church.”

When the abuse allegations first surfaced, the Archdiocese’s director of Vocations Father Richard McNeillie visited the region’s seminaries where seminarians from the Archdiocese are studying: St. Mary’s Seminary in Houston; Holy Trinity Seminary in the Dallas area; and the St. Joseph Seminary in Louisiana.

“I went there to reassure them and listen to their concerns and support them through it,” Father McNeillie said.
What he found instead reassured him of their support for the Catholic Church in resolving the crisis.

“I was impressed. The seminarians were in prayer and penance. They were fasting and abstaining on Fridays,” Father McNeillie said.

At St. Mary’s Seminary, seminarians began planning Aug. 26 with seminary leaders to hold an all-night prayer vigil, which eventually took place on Sept. 6, with Exposition of the Blessed Sacrament and Compline in response to the abuse. The vigil concluded the following day with Vespers. At least two seminarians remained in prayer for each hour, but a seminarian said there were “far more” in the Chapel for long portions of the vigil.

At each hour, the seminarians prayed the Litany of Forgiveness and Healing. Additional prayers were added to the Daily Office of Prayers, including Morning and Evening Prayers.

In Kingwood, a Mass of Reparation for healing was celebrated by Father T.J. Dolce at St. Martha Catholic Church on Aug. 28.

“The Prayers of Reparation emphasize the healing grace of prayer, penance, almsgiving and the redemptive power of Jesus Christ,” Father Dolce said. “We believe that our prayers, along with our corporal and spiritual acts of mercy, can bring healing to the hurting and can begin to repair the wounds of the Body of Christ.”

The parish also hosted a parish Rosary procession on Oct. 7, the Feast of Our Lady of the Rosary.

On Aug. 28, at St. Anthony of Padua Catholic Church in The Woodlands hosted a panel discussion and town hall meeting that was well attended. It was videotaped and posted on its website at https://ap.church/media/restore/. The parish will also be reciting the St. Michael the Archangel Prayer following Communion at all Sunday Masses.

'Nothing is as powerful as prayer'

Sacred Heart of Jesus Catholic Church in Manvel created a booklet of prayers that is distributed to parishioners and is also on its website. Parishioners gather at the church on Fridays at 3 p.m. or are asked to pray where they are, including a prayer for the Church and a prayer on the abuse crisis.

Michele Gunn, the church’s director of outreach, said Pastor Father Tom Ponzini addressed the “moral catastrophe” in his homily early on Aug. 19. Plus he has also encouraged parishioners to respond to the crisis in a three-prong manner of prayer, fasting and almsgiving similar to the Lenten season.

“We knew as a parish that we had to take action and nothing is as powerful as prayer, including the Litany of Forgiveness and Healing,” Gunn said.

To each invocation of that prayer, the response is: “Forgive Your Church, O Lord.” It begins “For all the ways Your shepherds have failed to care for Your flock…For the innocent lives that were violated, ruined, or scarred…For the warnings and complaints that were resisted or ignored…For the many instances of shattered trust…”

At Holy Family Parish in Galveston, Pastor Father Jude Ezuma said “Reciting the Rosary is a wonderful way for us to be immersed in the mysteries of our redemption in Christ Jesus. With each decade, we prayerfully contemplate the life, death and resurrection of Jesus Christ with Mary our Mother.”

He is encouraging his parishioners that, throughout the month of October, to pray the Rosary daily, “especially in light of the current scandals; for our families; and for the whole world.”

On Oct. 7, the parish held a community Rosary at Holy Rosary Church. On Oct. 12, the parish was scheduled to celebrate a Rosary rally at Sea Star Base Galveston, and an annual Our Lady of Fatima Mass on Oct. 14 at St. Mary’s Cathedral Basilica with a Rosary immediately following Mass.

In Sugar Land, St. Laurence Catholic Church held a time of prayer on Sept. 29 at the invitation of Pastor Father Drew Wood. The prayer vigil included a Rosary, Divine Mercy Chaplet and Adoration in the church as a way to “pray for victims of abuse, for the pope and the bishops, (and) for the purification and healing of our beloved Church.” Parishioners were also encouraged to fast that day.

Oct. 7 - Feast of Our Lady of the Holy Rosary

USCCB — During the month of October 2018, Pope Francis has requested “the faithful of all the world to pray that the Holy Mother of God place the Church beneath her protective mantle: to preserve her from the attacks by the devil, the great accuser, and at the same time to make her more aware of the faults, the errors and the abuses committed in the present and in the past, and committed to combating without any hesitation, so that evil may not prevail” (Holy See Press Office, Sept. 29).

The pope has asked for the prayer Sub Tuum Praesidium and the prayer to St. Michael the Archangel be added at the end of the Rosary, after the usual closing prayer.

The Sub Tuum Praesidium
We fly to your protection, O holy Mother of God; despise not our petitions in our necessities, but ever deliver us from all danger, O glorious and blessed Virgin.

The Prayer to St. Michael the Archangel
St. Michael the Archangel, defend us in battle; be our safeguard against the wickedness and snares of the devil. May God rebuke him, we humbly pray: and you, O prince of the heavenly hosts, by the power of God, cast down to hell Satan and the other evil spirits, who prowl through the world for the ruin of souls. Amen.