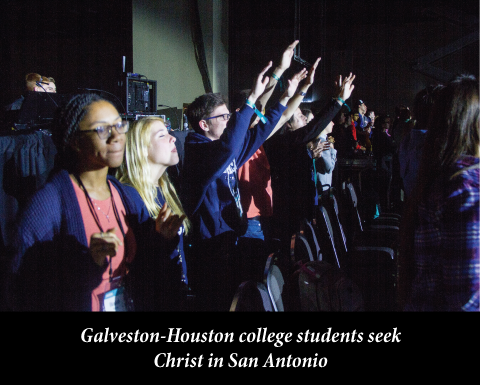 AN ANTONIO — Three days after the world changed calendars, 13,000-plus young adult attendees converged upon Central Texas for SEEK 2017, coming from as far as Austria, Ireland and as close as Houston.

Hosted by the Fellowship of Catholic University Students, known as FOCUS, just steps from the famed Riverwalk, more than 30 young adults from Galveston-Houston area colleges like the University of Houston, Rice, St. Thomas and Texas A&M - Galveston attended the biannaul conference.

Marie Aboagye, a junior at the University of Houston who attends the UH Catholic Newman Center said it blew her mind to see that many Catholics her age who also believe that Jesus and the faith is “more than just some kind of old story.” She said also enjoyed talking with religious inside and outside of the Sacraments, even in simple conversation because “they have such passion for the Lord” that “makes it more real.”

Aboagye, who is from the Ivory Coast in Africa, said she learned so much about herself including who she is “in Christ, how to stand firm in the faith, to build up valuable friendships and maintain a fruitful prayer life as well as to develop healthy relationships with the opposite gender.”
The five-day conference focused on the theme “What Moves You.” Speakers at SEEK included Father Mike Schmitz, a prominent young adult speaker and chaplain; theologian Edward Sri; Sister Bethany Madonna, a member of the Sisters of Life; and Sarah Swafford, also a popular young adult speaker, as well as dozens of other speakers.

Father Schmitz reminded his listeners to “not be conformed by this age. But be transformed by the renewal of your mind. Our call is to live like Jesus.”

Father Schmitz’s message of how an authentic faith can change the world echoed for Dillon Duke, a freshman at the University of Houston. “It was quite impactful and it’s made me look at my faith and our society completely different,” he said. While it’s easy to feel lost among a crowd of thousands, Duke found it just as easy to sit next to a stranger “we were all at the same place wanting to grow in faith. It was like walking into a room with thousands of best friends that you just haven’t met yet.”

Nicole Driscoll, campus minister at the Catholic Student Center at Rice University, said she enjoyed seeing her students from Rice be inspired by the talks and worship, breaking down those talks later.

“Since every university has its own campus culture, it was good being able to talk about what is unique to evangelization and living the Christian life at Rice in particular,” Driscoll said. Discussions touched on tough topics like moral relativism, and how to share faith with a community that does not believe in absolute truth.

During Adoration after a keynote, more than 300 priests heard more than 4,000 confessions that night alone. Driscoll said it was beautiful to witness so many students rushing to get in line for the sacrament, a line that quickly grew thousands deep reaching capacity and delay as to not break the convention center’s fire code.

A senior nursing student at UST, Mary Cheung said she “firmly” believes that God spoke to her in “subtle epiphanies” in each talk, each with a message to take away. “I knew it was the Holy Spirit,” Cheung said, who attends Ascension Chinese Mission. “It was always just what I needed to hear in the moment, and it was God’s way of saying to me, ‘I know your heart. Let me help heal you, love you, and be there for you.’”
Cheung, who also attended World Youth Day in Krakow, Poland, said it was “invigorating and encouraging to see so many Catholics on fire for their faith,” like a “mini World youth Day. It was also a good reminder that we are not meant to journey alone towards heaven.”

It’s such reactions that conference organizers hoped would resonate in the future among the college-age participants.

Craig Miller, FOCUS president, told CNS that he hoped that the most important thing participants take from the conference is “the knowledge that Jesus Christ loves them and that they all have a father who loves them and will be with them through everything.”

“Knowing what you are made for gives you purpose and knowing that you are born as son or daughter of God brings you in relationship with your creator,” he said.