From the beginning, St. Faustina parish makes mercy its focus 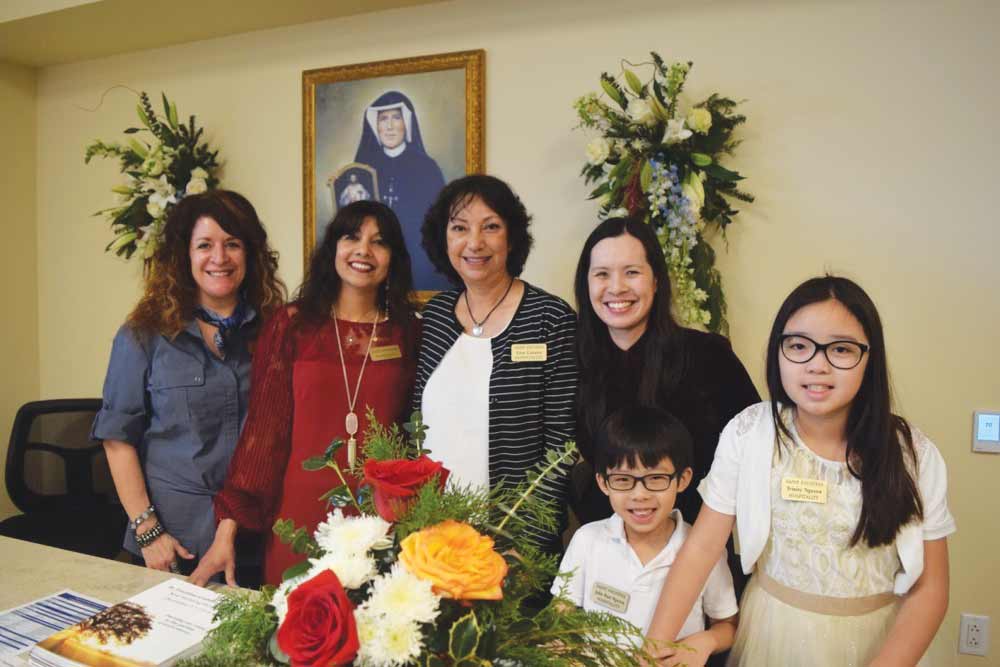 Editor’s note: It’s been four years since the official launch of the Archdiocese Pastoral Plan, “Fostering a Spirituality of Communion,” in which every parish was asked to submit a five-year plan for pastoral growth. In a continuing series of articles, the Herald highlights how parishes have answered that call.

FULSHEAR — When Sister Maria Faustina Kowalska of Poland was thwarted in her attempt to set up a new congregation in honor of the Divine Mercy, she wrote in her diary that Jesus told her, “My daughter, do whatever is within your power to spread devotion to My Divine Mercy. I will make up for what you lack.”

That was 1936, at the brink of World War II. Word spread of her apparitions, and so did their message. Sister Faustina was canonized in 2000 by St. John Paul II, who called the Polish mystic “the Apostle of Mercy.” The devotion to the Divine Mercy continues to spread, and what St. Faustina couldn’t accomplish in her short life, Christ continues to make up for what she lacked.

One of her newest congregations is the St. Faustina Kowalska Catholic Church in Fulshear, Fort Bend County. Founded in 2014, the first congregants gathered for Mass in a local elementary school. Three years later, the parish has more than 2,500 registered families and continues to grow. Mass is now celebrated in a new facility on 33 acres with a 20-year master plan for growth.

Understandably, St. Faustina Parish hasn’t formally filed its five-year pastoral plan to live, share and nurture the faith — the three “pathways” that are the Archdiocese’s blueprint for every parish.

Other plans necessarily took priority, such as forming a pastoral council, finance council, its liturgical and faith formation ministries, forming building committee, finding a permanent location for its future facilities, and raising the capital to build it.

Nevertheless, the Archdiocese’s pathways were instilled from the very beginning. The parish’s mission statement says it simply: “St. Faustina Catholic Church is a community where the deep love and mercy of God is lived, experienced and shared.”

“We were very blessed to be given the name St. Faustina,” said Father Dat Hoang, the new parish’s pastor. “From Day One we felt that our mission, our charism, is to share the message of Christ’s mercy for the whole world — especially the broken, the sinners and those who have lost hope.

“Keeping in mind the objectives of the pastoral planning, we cultivated the objectives into the creation of our councils and ministries. Our mission is to live, experience and share the mercy of God. And hospitality is the very forefront of everything we do. From the very beginning we wanted to be a community where everybody felt welcome,” he said.

“We have people outside greeting people, helping people, making it a very welcoming environment — especially if it’s their first time. We have new people coming every week for almost three years.”

In late 2016, St. Faustina moved into its “Phase One” facility, which includes a sacred space for worship, conference room, staff offices and classrooms. The church’s June 25 bulletin reports that $5.3 million in pledges have been raised against a capital campaign goal of $6.5 million to pay for the construction. More than $3.2 million has already been banked.

More than 1,000 students from kindergarten to high school are enrolled in the faith formation program. For lack of space, most students are home-schooled in their faith by their parents, with meetings at church once monthly — except those students in sacramental preparation classes who meet weekly.

The faith formation ministry supports home-schooling parents with materials and programs. The result: “Parents work together with the children and the whole family grows together in faith,” Father Hoang said.

Another positive result: “We did a survey and there’s a very strong desire for more adult formation. We’re also adding parenting programs to support our parents,” he said. “Now that we have a facility, we’re adding more weekly programs. Those who aren’t able to be home-schooled have the option of coming to the parish.”

To build community, the parish adopted the ARISE Together in Christ program where adults commit to meeting in small groups to deepen and share their faith — and connect faith with action.

“For six weeks they are committed to meet once a week as a small Christian community. They meet in their homes. There’s a facilitator. They’ll rotate houses, pray together, help each other, build community, grow in their faith — and challenge each other to grow and serve.”

The program is active in 31 countries and 40 languages, which suits this highly diverse community.

“Every weekend when we get together for Mass it’s like the United Nations,” Father Hoang said. “When I first came out here and met with the principal where we were going to celebrate Mass, she told me, ‘Father Dat, the children here speak 32 languages.’ Every weekend it’s so beautiful to see. It’s so very diversified. And I love it.”

As for next steps, the pastor said the that the three-year terms of current pastoral council members are expiring soon. After the new council is formed, it will start working on creating the parish pastoral plan, he said.

But the principles are already there: “The Spirituality of Communion. Reaching out. We’ve always made it a conscious part of what we do. Now we’ll look ahead to the next five years, prioritize and start working on them,” he said. “It’s been quite a journey. We’re in a different place from the rest of the Archdiocese — just because the timing of our creation.”

Why would Christ appear to a humble Polish nun to restart the conversation around his Divine Mercy?

Perhaps the children of God, at the brink of global war, needed to be reminded that the mercy that flows from Christ is intended to flow through the faithful to everyone they encounter.

In Jesus’ Parable of the Talents (Matt. 25: 14-30), a rich man gives five talents to one servant, three to another and one to a third. While the master is away, the first two invest their talents to double their number. The third cowardly buries the talent he is entrusted and is harshly scolded for it. The parable is usually taken to be a warning about squandering God’s gifts. But one of God’s greatest gifts is mercy.

In that context, Jesus’ warning is amplified, “For to everyone who has, more will be given and he will grow rich; but from the one who has not, even what he has will be taken away.”