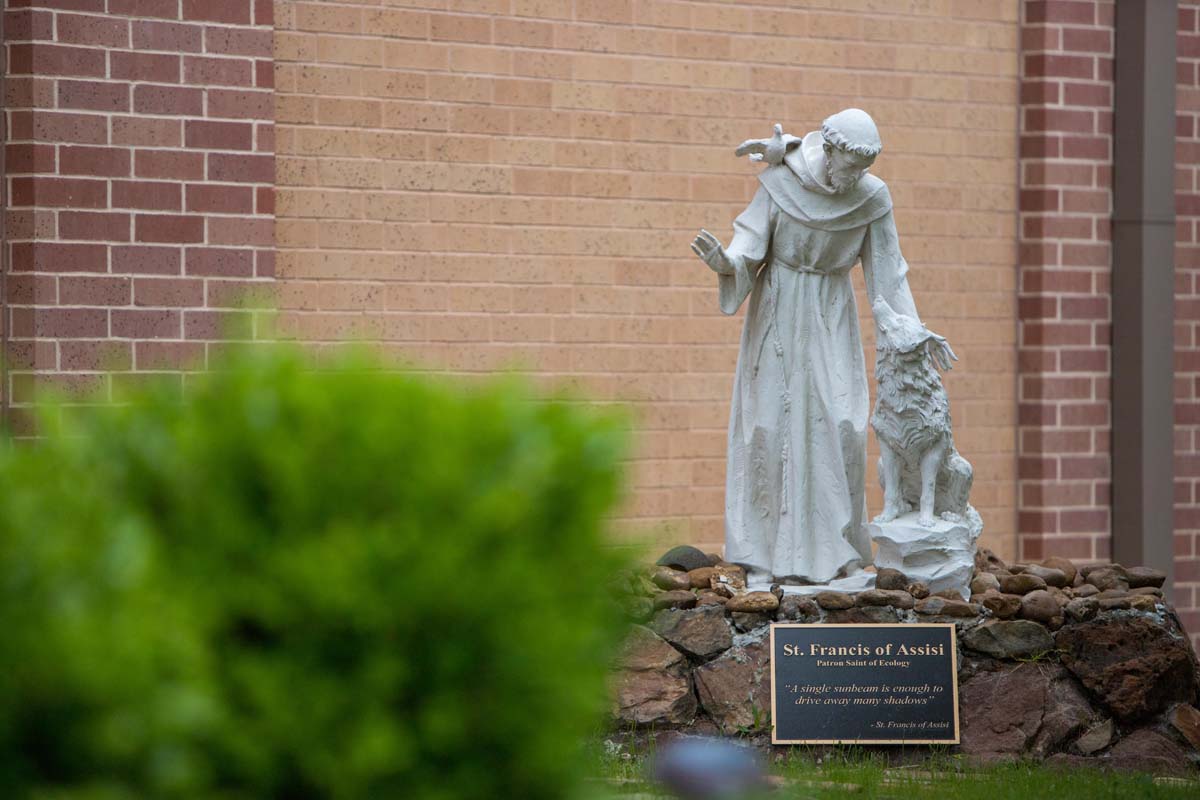 A shrine to St. Francis of Assisi, depicted with a pair of animals, stands in a small meditation garden outside Mary Queen Catholic Church in Friendswood. The parish’s sustainability ministry works to increase efforts of recycling and awareness in the parish community. Photo by James Ramos/Herald.

FRIENDSWOOD — It’s surprising how much trash a simple post-Mass coffee and doughnut gathering can generate. Each one collects many boxes of donuts, Styrofoam coffee cups and plastic stirrers, paper and plastic ware, almost all of which are not recyclable that will never biodegrade. Multiply this by the many parishes across the Archdiocese that host similar events, and quickly there’s enough trash to fill many garbage bins.

At Mary Queen Catholic Church in Friendswood, their Sustainability Ministry is working in tandem with the parish offices and ministries to slow the tide of endless trash, raise awareness of recycling efforts and move parishioners to action by using sustainable and recyclable wares in the parish through events and campaigns.

Around the campus, recycling bins sit next to trash bins, encouraging active efforts to recycle. Led by parishioner Bill Clark, a retired engineer, the group has grown to be a “partnership,” he said, that includes several generations that’s 50-members strong and growing.

Sustainable efforts also reach for the sky, with 52 solar panels sitting atop the parish that were installed in January. While the numbers were still rolling in, the parish expects a good financial return on the solar panel investment, parish officials said. According to Clark, since the start of the year the parish is also powered by renewable energy.

A decade ago in 2008, Pope Benedict XVI installed 2,400 solar panels atop the Pope Paul IV Audience Hall, where pontiffs regularly hold general audiences with thousands. According to reports, the system would cut carbon dioxide emissions by about 225 tons each year.

While Pope Benedict XVI was often called the “green pope” for preaching on the World Day of Peace in 2010, among many other times, that “we are all responsible for the protection and care of the environment,” Pope Francis “has a continuity with care for human and non-human life,” according to Sister Damien Marie Savino, FSE.

Pope Francis “puts forth a very consistent life ethic that is both pro-life and pro-environment,” said Sister Savino, dean of Science and Sustainability at Michigan’s Aquinas College.

Pope Francis’s encyclical “Laudato Si’ on Care for Our Common Home,” in one sense, is a ground breaking document as Francis is the first pope to directly address the environment in an encyclical, but at the same time the message is in continuity with St. John Paul II and Benedict XVI, said Sister Savino.

That message serves as a motivating call for Clark and the team alongside him, including Father James H. Kuczynski, M.S., Mary Queen’s pastor. Father Kuczynski said establishing a small shrine and meditation garden to St. Francis of Assisi, who is known as the patron saint of the environment, was the first step in the parish’s efforts.

“Because of the basis of “Laudauto Si’”, the dedication to all creation, all the care of the earth and the environment has to be there,” he said. The parish quickly formed study groups to learn more about the document, and soon efforts developed from education and reflection activates.
And since the efforts began, Father Kuczynski said he sees the “recognition and gratitude” and increased “acceptance.” He noted how a young scout approached him for a scouting project, interviewing the priest about the parish’s sustainability efforts.

The youth, parish officials say, are an inspiring part of the movement.

Members from the senior and junior high councils help to sort the recycling bins around the campus, and several students helped to lead activities during the ministry’s annual Earth Day fair.
In 2015, Pope Francis established the World Day of Prayer for Care of Creation on Sept. 1, affirming a customary time celebrated in the Orthodox Church since 1989.

When Pope Francis instituted the annual day, he said it would be a time for individuals and communities to “reaffirm their personal vocation to be stewards of creation, to thank God for the wonderful handiwork which he has entrusted to our care, and to implore his help for the protection of creation as well as his pardon for the sins committed against the world in which we live.”

And despite challenges, like complacency and habit, efforts continue today with the traditional parish coffee and doughnut gathering, as well as several other events, evolving to include recyclable, eco-friendly items that are all biodegradable.