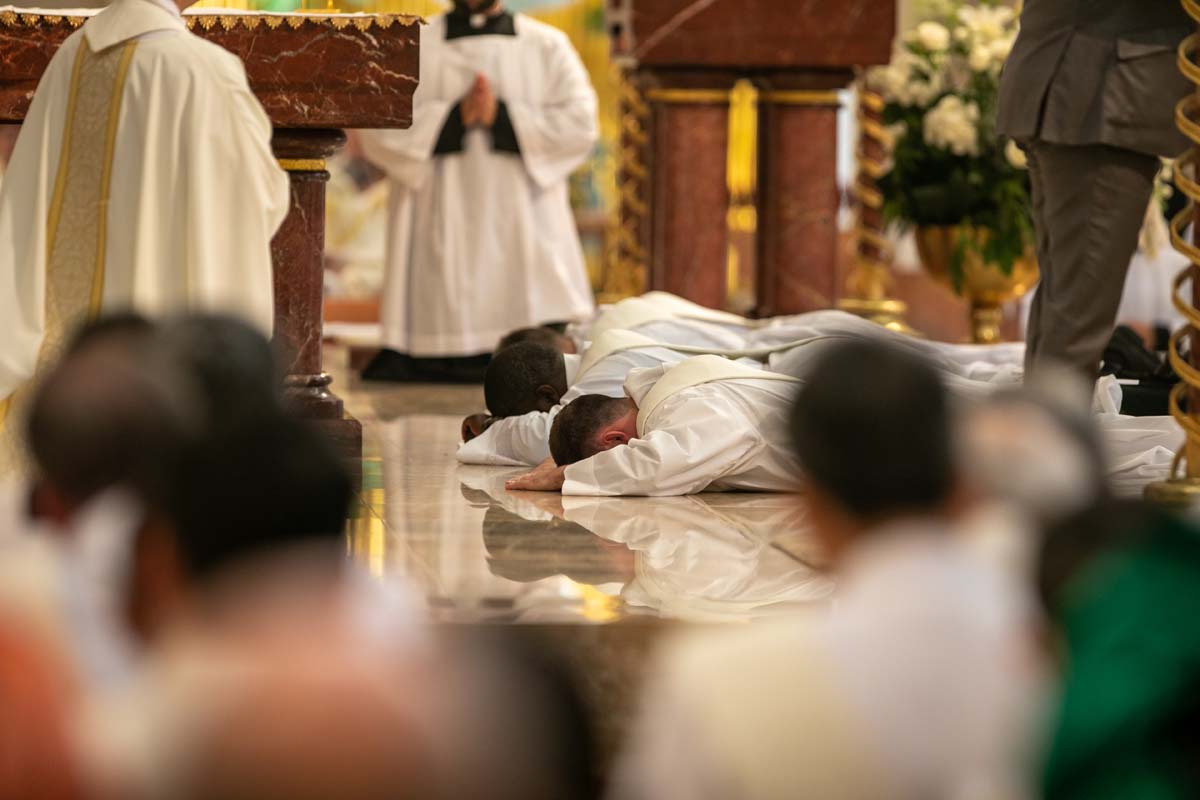 Father Chad Henry, with Father Hoang “Wayne” Ly, Father Houston Okonma and Father Joseph White, lay down on the altar at the Co-Cathedral of the Sacred Heart in Houston June 5 during their ordination Mass. (Photo by James Ramos/Herald)

HOUSTON — A years-long journey culminated for four men on June 5 when the Archdiocese saw the ordination of four new priests at the Co-Cathedral of the Sacred Heart.

Now, only God knows what new adventures await in their future.

In his homily, Cardinal DiNardo said their new vocation was a “high call” and a “summons to be truly humble, like the servant son Jesus Christ.”

The four new priests are called to re-light the candle wicks of the world that have been extinguished by society for whatever reason, he said.

“You will accompany all,” Cardinal DiNardo told the four new priests. “You will accompany them to, and with, Jesus. But especially the poor and the have-nots, the immigrant and the troubled, the unborn and the forgotten prisoner.”

Reflecting on the Mass’s first reading from the Book of Numbers, Cardinal DiNardo said that Moses needed and sought collaboration.

“My brothers,” he said, “so should you. Synodality is a way of life in the Church and not just a term. A kind of communion that Pope Francis asks of us all. To walk together and to hear before you speak, to listen before you preach, all this is very important to your life and to the life of this local Church.”

Cardinal DiNardo invited those present and those throughout the Archdiocese to pray for the newly ordained priests as they began their new assignments.

The Mass had the Rite of Ordination, which includes the Calling and Presentation of the Candidates, Election by the bishop and consent of the people, the promise of obedience and an invitation to prayer. During this invitation to prayer, the candidates prostrate themselves on the floor as the congregation invokes the prayers of the saints through a chanted litany and of the Holy Spirit.

Chanting ‘Veni Sancti Spiritus,’ the Imposition of Hands followed, then the newly ordained are vested with their priestly stole and chasuble, presented by seminarians and put on by fellow priests of the Archdiocese.

The new priests’ hands are then anointed by Cardinal DiNardo and handed the bread and wine, followed by a kiss of peace — a greeting shared by the bishops and several priests of the Archdiocese. †