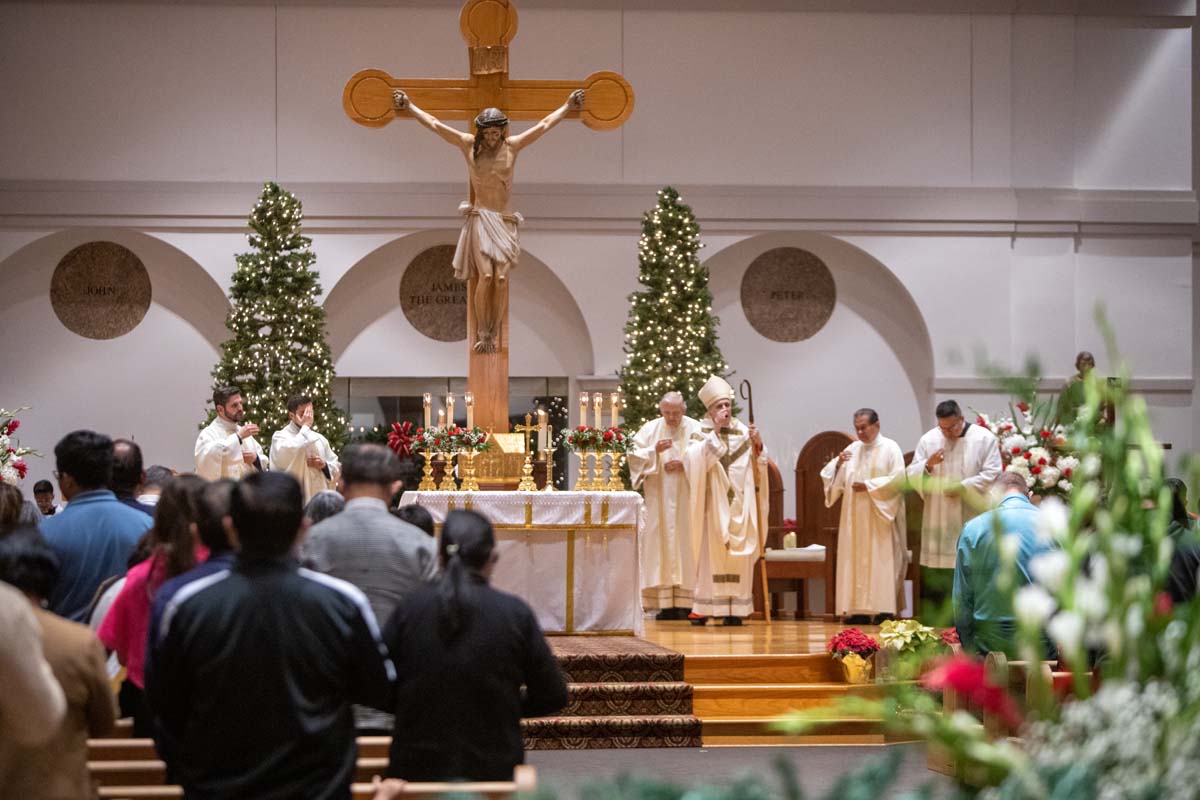 Daniel Cardinal DiNardo gives the blessing at the conclusion of the final Simbang Gabi Mass at St. Bartholomew Catholic Church in Katy on Dec. 23, 2021. The Katy-area parish is one of four new pilgrimage sites marking the jubilee of the 500th anniversary of Christianity in the Philippines. (Photo by James Ramos/Herald)

HOUSTON — Catholics around the Archdiocese will have a unique opportunity to join the local Filipino Catholic community in celebrating the 500th anniversary of Christianity in the Philippines.

Starting on Jan. 26, four parishes in the greater Houston area will be local pilgrimage sites for a special jubilee celebration.

Archbishop Emeritus Joseph A. Fiorenza opened the jubilee when he celebrated a Mass on Sept. 25, 2021, at Notre Dame, where a letter by Daniel Cardinal DiNardo was shared with the Filipino community to open the special jubilee, which began on Sept. 25, 2021.

“This local Church continues to be enlivened by the deep faith and religious customs of the Filipino Catholic community throughout Galveston-Houston,” Cardinal DiNardo said in the letter. “By establishing this jubilee, it is my hope that all the faithful will grow in their awareness of the importance of missionary zeal for spreading the Gospel of Jesus Christ and that they will intensify their prayers and support for the work of our Catholic missions.”

A special reason to visit

After a request from Cardinal DiNardo, the Holy See issued a decree that the four parishes can be designated as pilgrim churches. Starting Jan. 26, the faithful can visit any of these four parishes and obtain a plenary indulgence.

A plenary indulgence grants the remission of all temporal punishment due to sin and must be coupled with a sacramental confession, reception of Holy Communion, praying for the Holy Father’s intentions and complete detachment from all sin including venial.

A number of additional Masses will conclude the eight-month celebration. Mary Queen Catholic Church will host a Santo Niño Rosary, novena and Mass on Jan. 29 at 11 a.m. in Friendswood. Sacred Heart of Jesus in Manvel will host a Mass in February and the Co-Cathedral of the Sacred Heart will host the final Mass on April 26, which will close the jubilee.

Father Edmund Eduarte, the vicar for the more than 50,000 Filipino Catholics in Galveston-Houston, welcomed Cardinal DiNardo’s message and encouraged all Catholics in the Archdiocese to embrace the jubilee as an opportunity to grow in faith, especially with the special jubilee indulgence period, which concludes April 26.

“This celebration is a recognition of the Filipino faith,” said Father Eduarte, who is also pastor of Blessed Sacrament Catholic Church in the East End. “Pope Francis once noted that wherever Filipinos go, they bring with them the joy of their Catholic faith. This celebration means a great deal to us and reminds us that the gift that was given to us 500 years ago is so special.”

Father Eduarte recognized the richness and devotion in other cultural celebrations of the Catholic faith. He also saw a remarkable depth in the way Filipinos celebrate and share the faith.

“What makes the Filipino faith unique is the joy,” he said, noting how Filipinos can have a special way of dealing with life, including devastating hurricanes and storms, but still have a smile.

“Despite the destruction, they’re still smiling,” he said. “They’re grateful that they are alive. That gratitude makes them hold onto God’s promise because they know that God will never fail them, that God will always be close to them.”

With the Philippines as the only predominantly Catholic nation in Asia, Father Eduarte said he hopes Filipino Catholics will remain a visible sign of faith both there and in Texas, even if it just means feeling a sense of home.

Archdiocesan Filipino ministry officials said there are 22 Filipino priests and six Filipino deacons that serve many parishes and hospital chaplaincies in Galveston-Houston.

Like Father Eduarte, Sister Ricca Dimalibot, CCVI, M.D., medical director for the CHRISTUS Point of Light Clinic in Dickinson, is one of the more than two million Filipinos who migrated to the U.S., making the U.S. home to the largest number of Filipinos living overseas.

Sister Dimalibot, who spent the first half of her life living in the Philippines, attended the Simbang Gabi Culmination Mass, which Cardinal DiNardo celebrated on Dec. 23 at St. Bartholomew Catholic Church in Katy.

She saw her experience that night, which was a reflection of her early years in the Philippines, as “proof of how Catholicism is interwoven in every aspect of the lives of Filipinos.”

When she was in the Philippines, the Simbang Gabi tradition, which usually is an early morning Mass, though celebrated in the evenings here in the U.S. so that more can attend, was part of her faith.

“When I was in medical school, I walked to church with my classmates,” she said, noting how the whole neighborhood would be decorated with traditional Filipino Christmas lights and that after Mass, Filipino breakfast foods were available as a post-Mass meal. “The whole experience of worship, community and fellowship helped form my faith life now.”

“It was touching for me to sing old Filipino hymns and learn new ones during Mass,” she said. “Several dialects were spoken, and it felt like home hearing them again.”

Now living in the States, Sister Dimalibot, who is also a general councilor for the Sisters of Charity of the Incarnate Word, makes an effort to attend the final Simbang Gabi Mass every year. This year is more meaningful, she said, in part because of the 500th anniversary, but also to pray for her fellow Filipinos recovering from Typhoon Rai, which killed more than 400.

She said Cardinal DiNardo’s message, which echoed the pope, was to make sure Filipino Catholics pass on the faith to the next generation. She also prayed for an end to the pandemic, the effects of which she has seen in person at her clinic.

“Several Filipinos who work in the medical field died during the pandemic. That doesn’t stop Filipinos from traveling abroad for work to help their families,” she said.

Father Eduarte agreed, noting how the jubilee and the Simbang Gabi tradition has become a kind of pledge for many Filipinos in thanksgiving to God for the many gifts they have received, in turn, a response of faith and service to others. And for many Filipinos, that service overflows into careers in health care, an industry that continues to buckle under the pandemic.

Just seven months into the pandemic, the National Nurses United found that nearly one in three U.S. registered nurses who died of COVID-19 were Filipino.

An estimated one in four frontline healthcare workers are of Filipino descent, despite the fact that Filipinos represent only 1% of the U.S. population, a July 2021 JAMA Network report said.

Filipino immigrants represent the fourth-largest migrant group, after Mexico, India and China, according to the Migration Policy Institute.

What are indulgences? An explainer

Through an indulgence, God grants the prayer of the Church that the temporal penalty for sin due to someone be reduced (or possibly eliminated). By God’s grace, participation in a prayer or action that has an indulgence attached to it brings about the necessary restoration and reparation without the suffering that would normally accompany it.

How does one receive an indulgence?

It is because of the Communion of Saints that some or all of the temporal punishment for sin is removed. As a result of the communion that exists between Christ and all the members of the Church, the Church has a treasury of spiritual goods that is inexhaustible. Through her union with Christ, the Church has the authority to dispense this treasury.

When the Church does this, in order to spur people to acts of piety and charity, the Church requires those who seek an indulgence to perform some good work or act of devotion.

To receive a plenary indulgence, in addition to good works or acts of devotion, Catholics should satisfy four conditions: (1) sacramental confession, (2) reception of Holy Communion, (3) prayer for the intentions of the Holy Father, and (4) complete detachment from all sin, even venial sin. For this special jubilee, local Catholics should also make a pilgrimage to one of the four jubilee parishes.