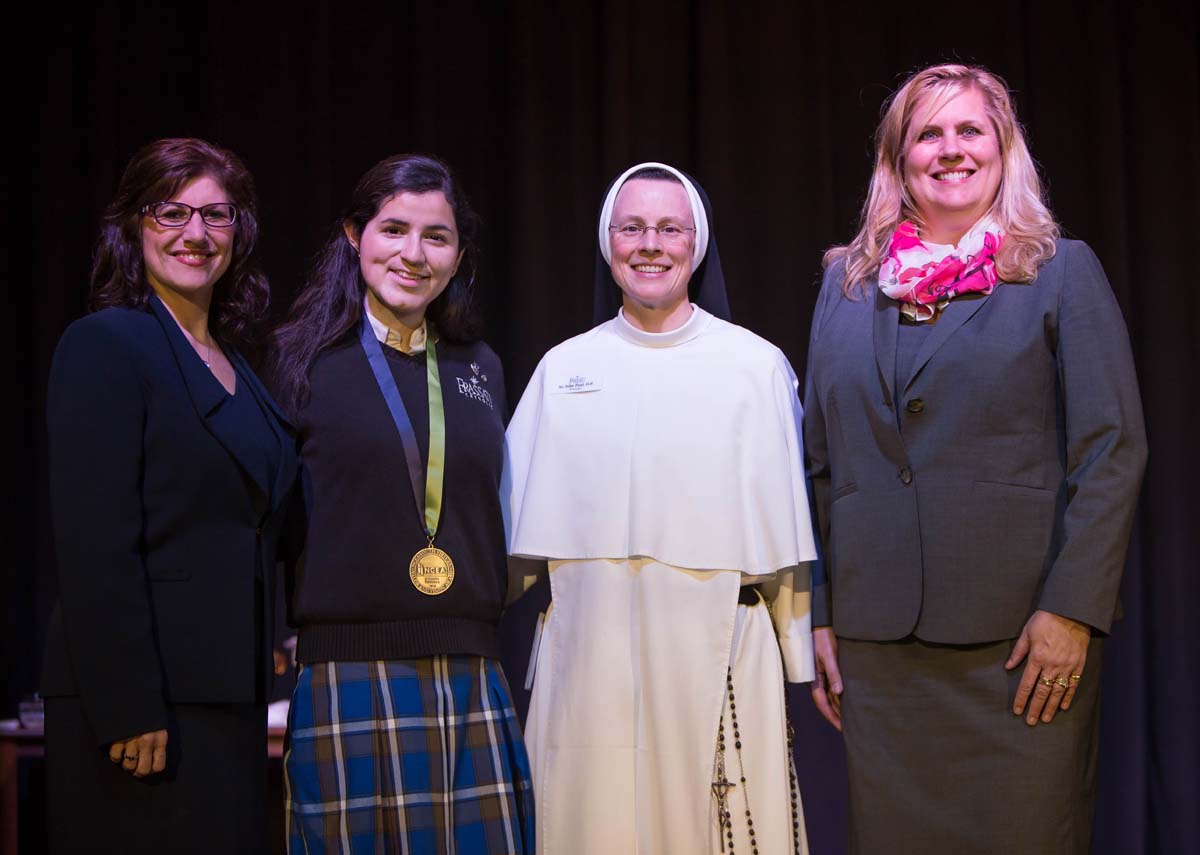 HOUSTON — Juliana Esparza, a senior Frassati Catholic High School student was one of ten students in the nation to win the 2018 Youth Virtues, Valor, and Vision Award from the National Catholic Educational Association (NCEA) for selfless service, determination, innovation and ideals that are changing the world.

Selected from more than 1.9 million Catholic school students across the country, Esparza was recognized for her efforts to start a nonprofit dedicated to supporting at-risk high school teens. On Feb. 23 in Houston, she received the prestigious NCEA Medal of Honor and certificate from NCEA representatives and Galveston-Houston Superintendent of Catholic Schools Debra Haney.

“Seemingly quiet and unassuming, Juliana Esparza is in fact a phenomenal force for good,” said Frassati Catholic Principal Sister John Paul, O.P. “It is remarkable that a high school student, before the start of her senior year, has established a non-profit organization and conducted a week-long workshop for young people at risk for dropping out of high school. However, what’s most impressive about Juliana’s great accomplishments at such a young age is that they result from small, seemingly insignificant, choices made each day. Each day Juliana chooses to be sensitive to the needs of those around her and responds with genuine interest and support.”

NCEA’s Dr. Barbara Edmonson extended “sincere congratulations to all the winners and to all those who have supported the outstanding service and faith witness of these remarkable young people. Young people in our Catholic schools are truly changing the world, one student at a time.”

Sister John Paul echoed that, saying “It is not surprising, then, that [Esparza] responded generously to the call to do something to change the high school dropout culture so prevalent in our communities. I am grateful that Juliana’s creativity, generosity and initiative are being recognized and highlighted through the Youth Virtues, Valor and Vison Award, particularly since she would not want the recognition.”

Esparza credited her community for helping her on her journey.

“Receiving this award is an honor and a gift that shows what I could not have accomplished without my team, my family, and my faith and formation,” said Esparza. “People made Live It Out happen. God placed these service opportunities in my hands so that I could do the work possible to help others. For me, this award shows that it takes Christ and a people-centered team to move forward. Frassati Catholic’s culture has helped me view my faith not as an obligation, but as an opportunity. School retreats, conversations on ethics, service projects, teachers, and students have shown me that after learning about Catholicism, it should be lived out, and it is best lived through service. It’s an encounter with Christ, which I think makes us really happy even if we don’t know Him.”

After seeing a classmate dropout of school, Esparza was motived to show “the hope that has opened many doors” to her peers in school. She dreamed of a nonprofit “that would give teens hope and help in discovering what they’re capable of.”

“If every teen,” she said, “let alone person, knew how much they are capable of, the world would no longer be hindered by the fear of rejection.”

This idea to spread hope, said Esparza, was in many ways motivated by her experiences at Frassati Catholic.

“At Frassati, we strive to live according to the Beatitudes and to be fearless leaders that swim against the tide,” said Esparza. She said the school played a “crucial role” in the formation of her nonprofit, giving her the “gift of knowing... Christ is at our side” and that “He is our hope.”

Esparza founded Live It Out, a support group for at-risk teens, in September 2016. The group aims to reduce the high school dropout rate that leads to more than 1.2 million teens who drop out of school each year. By cultivating hope, the organization also aims to foster community leaders “by offering teens communication, leadership, and creativity skills so that they may discover their potential.”

Her model centers on the idea of peer-to-peer support: “Live It Out is different from many organizations that help reduce the dropout rate because it is run by teens for teens. [What] Live it Out does and we strive to do as an organization is to transmit hope. We strive to transmit hope to teens so that they may develop good actions, good habits, and good character.”

Following fundraising and rallying support, Live It Out held its first major event in June 2017 at a nearby college, a four day camp led by 30 teen volunteers who hosted 25 at-risk teens, each given a scholarship to attend. The curriculum inspired by leadership programs in Youth Potential Development, run by Franco Soldi.

Esparza plans to pursue a degree in engineering in college. She will continue her work with Live It Out, and is set to present at SXSW EDU 2018 in Austin on March 6.

Esparza also stressed the important role Catholic education has played in her formation.

“I think our faith is best lived when we know what we believe in,” she said. “Who I am is because of the backbone of my Catholic education. I am grateful for the effort my family has made to gift me a Catholic education and an opportunity to know and live out who I am called to be.”

Learn more about Live It Out at www.weliveitout.org.