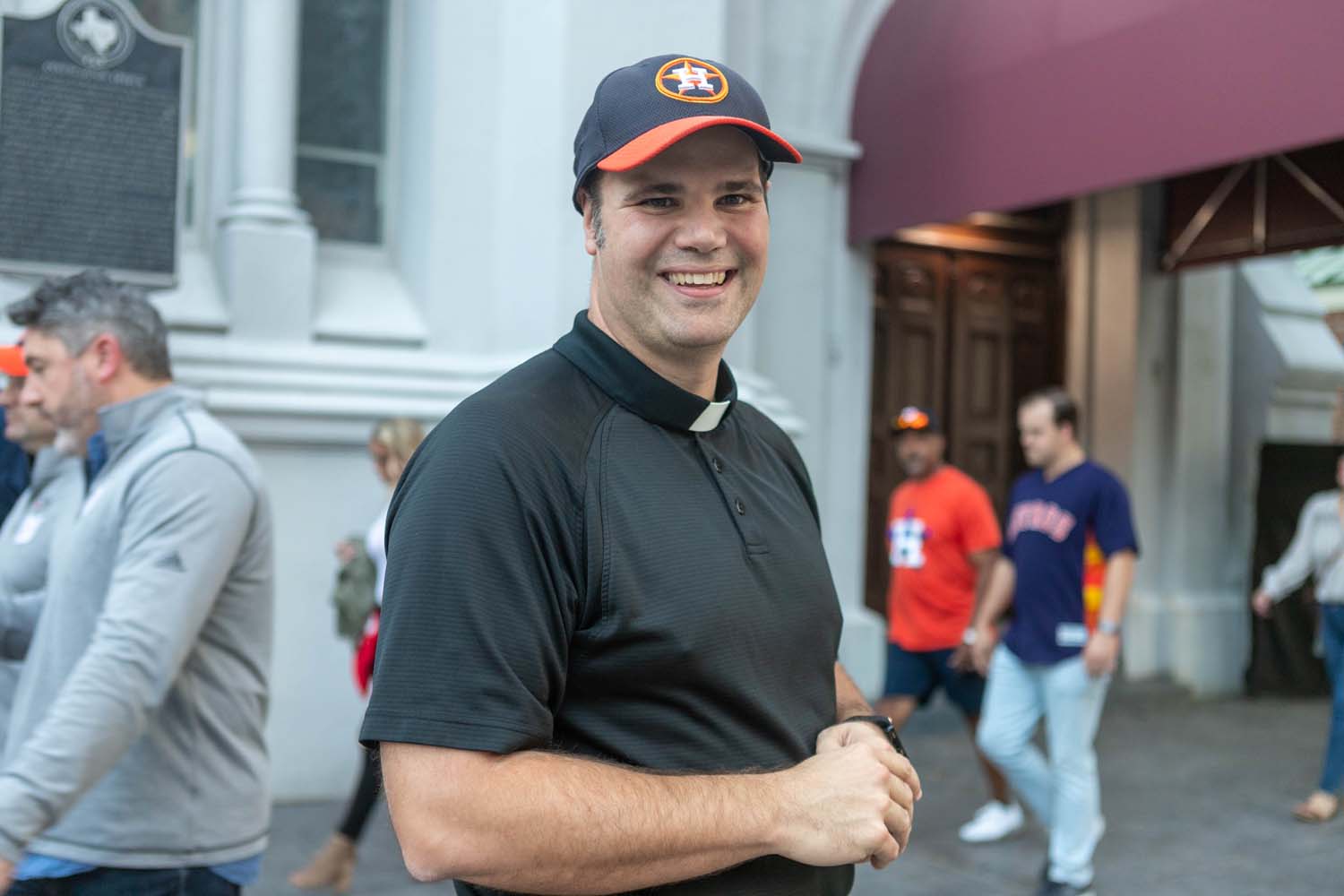 Father T.J. Dolce stands outside Annunication Catholic Church in Houston, which sits across from Minute Maid Park where the Houston Astros played Game 1 and Game 2 of the 2019 World Series against the Washington Nationals. Father Dolce, pastor of St. Martha Catholic Church and School in Kingwood, Texas, has said Masses in the ballpark for Astros players, staff and workers. Below, Father Dolce is seen outside Minute Maid Park before Game 1, Oct. 22. (Photos by James Ramos, Texas Catholic Herald)

When his beloved Houston Astros earned their trip to the 2019 World Series to take on the Washington Nationals in the Fall Classic, Father Dolce knew his Oct. 23 birthday would coincide with Game 2 of World Series.

Then after a group of parishioners gave him a thrilling birthday gift of tickets to Games 1 and 2, he had the chance to wear his Roman clerical collar and watch the World Series in person.

While he didn't get the birthday win he wanted, he was still excited to be there.

The World Series is great for Houston, Father Dolce said. "It's something that really unifies us together, in the midst of all this political season, this is one thing everybody can agree on: Go Astros." 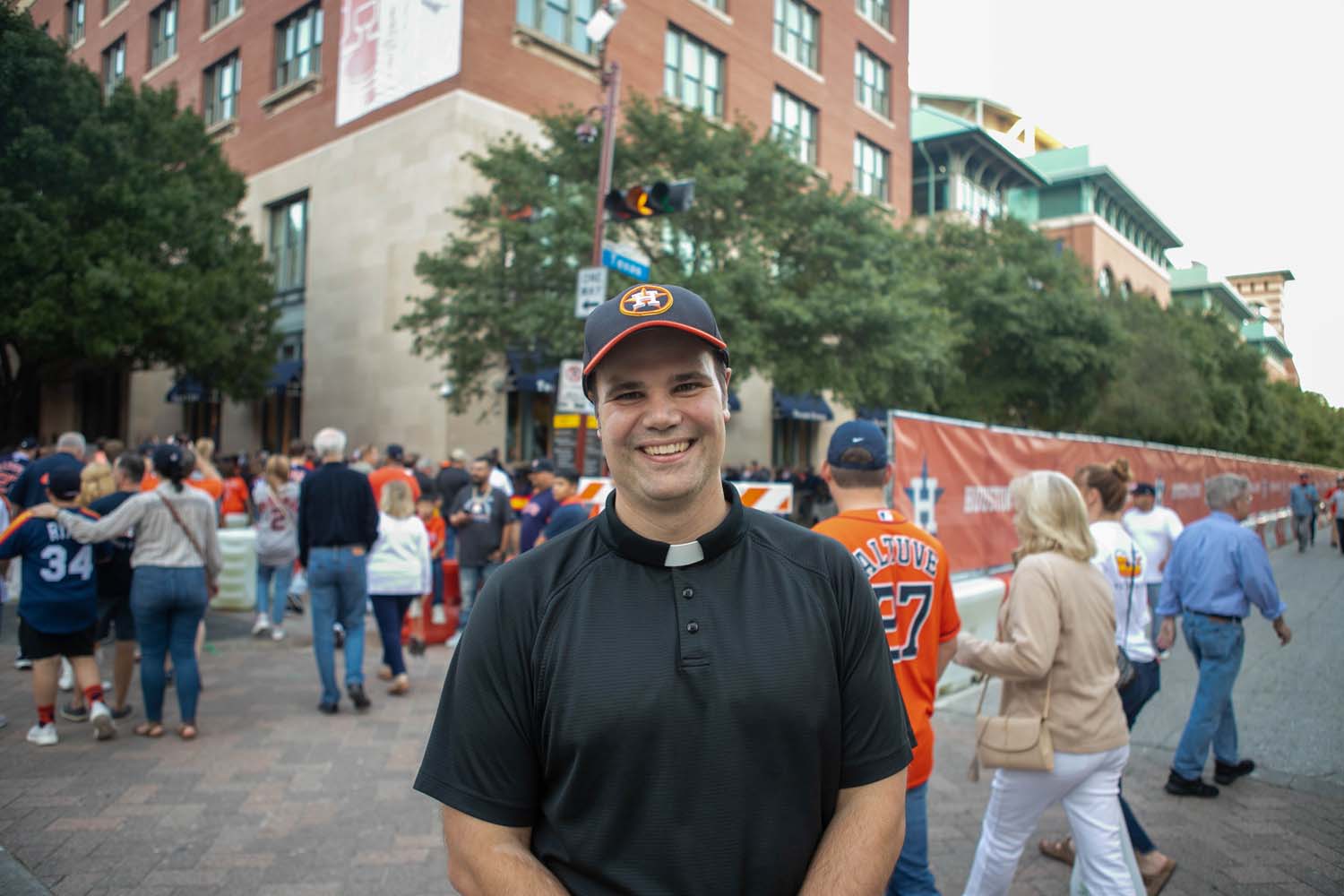 Father Dolce, the former vocations director for the Archdiocese of Galveston-Houston, had been to Minute Maid Park many times before, both to attend games and also celebrate Sunday Masses at the ballpark for the Astros' players, community and ballpark staff.

He and his parochial community were looking for a reason to cheer.

The World Series "gives us a few hours to keep our minds off of all the flooding and the potential difficulties that we have. We flooded twice in four months. And a lot of us are wondering, 'When are we going to get that much rain again?' It could happen tomorrow, it could happen next week, but this allows us to have a little distraction," said Father Dolce.

A clerical collar stands out in the sea of baseball garb and colors.

"It's exciting for people to see that and just the randomness of people walking up saying, 'Hey Father, where's your parish? Who are you? What are you doing?'" Father Dolce said. "It's good for people to see that I'm a baseball fan and priests can do regular things and go to ballgames and cheer on our local team. It's a lot of fun."

Standing on the "holy corner" where the Astros' ballpark campus meets the neighboring Annunciation Catholic Church, a 150-year-old church, Father Dolce finds an easy connection between baseball and church liturgy.

Father Dolce continued: "As a society and a culture, I think we've lost sight of what baseball can teach us about being OK with where we are and who we are. We can be OK with being contemplative for a few hours. There's no other sport in the world that you can do that."

Father Dolce said athletes like Altuve, who regularly thanked God for their team's success, help to make society better because "a lot of times we've forgotten that God is a part of everything we do."

And when the Astros attempt to rally for a win in Washington against the Nationals Oct. 25, Father Dolce will be watching, alongside the rest of the millions of Astros fans along the Gulf Coast.