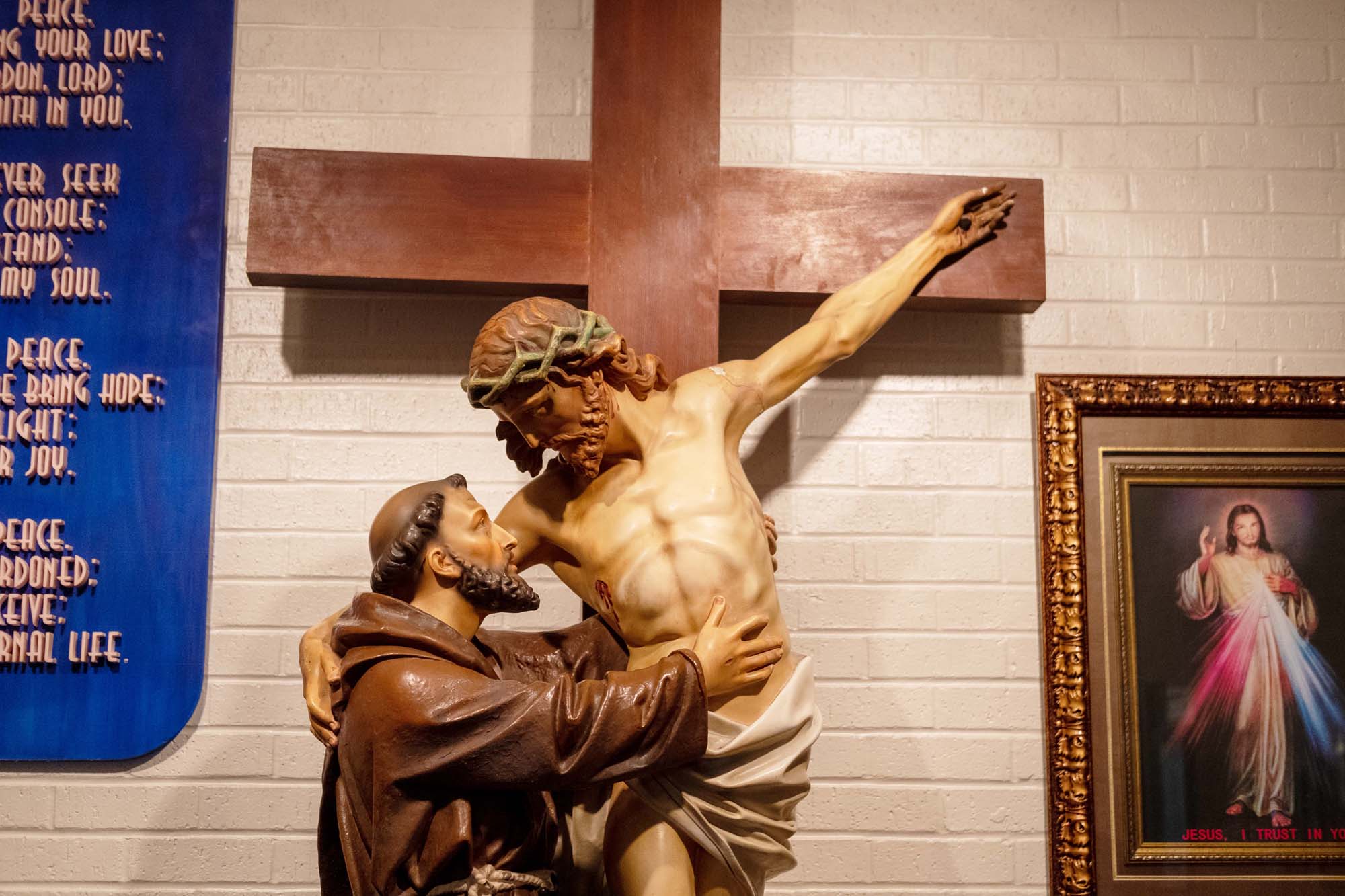 A statue depicts St. Francis of Assisi reaching up to embrace the Crucified Christ is seen during a recent Mass at St. Francis of Assisi Catholic Church in Houston’s Kashmere Gardens neighborhood. The parish was one of several Catholic communities devastated by record-breaking floods during Hurricane Harvey five years ago in 2017. Father Martin Eke, pastor, said the parish continues to see growth and change since the storm. (Photo by James Ramos/Herald)

HOUSTON — It was the sound of rain that woke him.

At 3 a.m. Father Martin Eke, MSP, stepped out of his rectory and was greeted by Hurricane Harvey, which had brought its slow churn of record-setting rainfall to his doorstep.

For Father Eke, and like millions of his Texas neighbors, everything changed that day, Aug. 25, 2017, when Harvey made landfall.

Nearly five years later, Father Eke can still vividly remember that night. Coming from Nigeria, the pastor of St. Francis of Assisi Catholic Church in Kashmere Gardens neighborhood in northeast Houston wasn’t familiar with hurricane season or floods. While the parish had flooded before, during Tropical Storm Allison which, also wrecked much of the region, preparations for Harvey were sparse.

So when he waded through waist-deep water to the church and found it already flooded with water from the nearby Hunting Bayou, he snapped into action to extract and save what he could. And in the days, months and years ahead, Father Eke continued to do the same with his parishioners and students at St. Francis of Assisi Catholic School, which closed in 2020.

Like in many communities recovering after Harvey, Father Eke led a herculean effort to draw parishioners back together. Parishioners helped neighbors and each other recover by any means necessary. The journey, which still continues today for some, was arduous.

At first meeting under the shade of the parish’s aged trees, the congregation moved to a tent and eventually the parish gymnasium for Masses and events. The church finally reopened and was formally re-dedicated in March of 2019.

Much of the experience, one that splintered his parish, proved useful when the COVID-19 pandemic arrived in 2020.

Change? That’s nothing new to Father Eke or his parishioners.

But the fear and shocking death from the onset of the pandemic, one that shattered many minority communities that already struggled with access to quality health care, that was new and was “very, very difficult,” Father Eke said.

During Harvey, the priest constantly reminded his parishioners of the story of Jeremiah, the Biblical story of a man who felt constantly “duped” by God. During COVID-19, Father Eke looked to St. Paul and his letter to the Corinthians 4:8-10 and Paul’s message of courage in the face of fear and affliction.

“No matter the fear, we are holding on. It was easy to gather during and after the hurricane, but it was very difficult to gather with COVID-19,” he said.

But despite the seemingly insurmountable challenges, Father Eke said a silver lining from the pandemic was the “enormous” spiritual growth his parish has seen because of the pandemic.

The church was already primed to livestream Mass for the home-bound before the pandemic, so it was a simple transition to bring the Mass to those in quarantine or during the ‘Stay-at-Home’ months of 2020.

Another major source of faith and growth has been the parish Rosary group, which Father Eke and other ministry leaders host every weeknight online. Originally meant for parishioners and begun at the start of the pandemic, the community blossomed to nearly 80 to 100 regular attendees, who pray the Rosary, various Psalms, litanies and worship in song.

“The parish remained together through it all,” he said. “We have not just St. Francis of Assisi parishioners, we have people across United States ... that join us every night. They call in, and then I lead them in the prayers. The prayers last for about 45 minutes every night, which nobody ever dreamed about before COVID-19.”

Much like during the time after Harvey, Father Eke said the hardest part of the pandemic was not seeing his parishioners.

Still, he reminds his congregation, near and far, to not give into fear, drawing again from St. Paul. 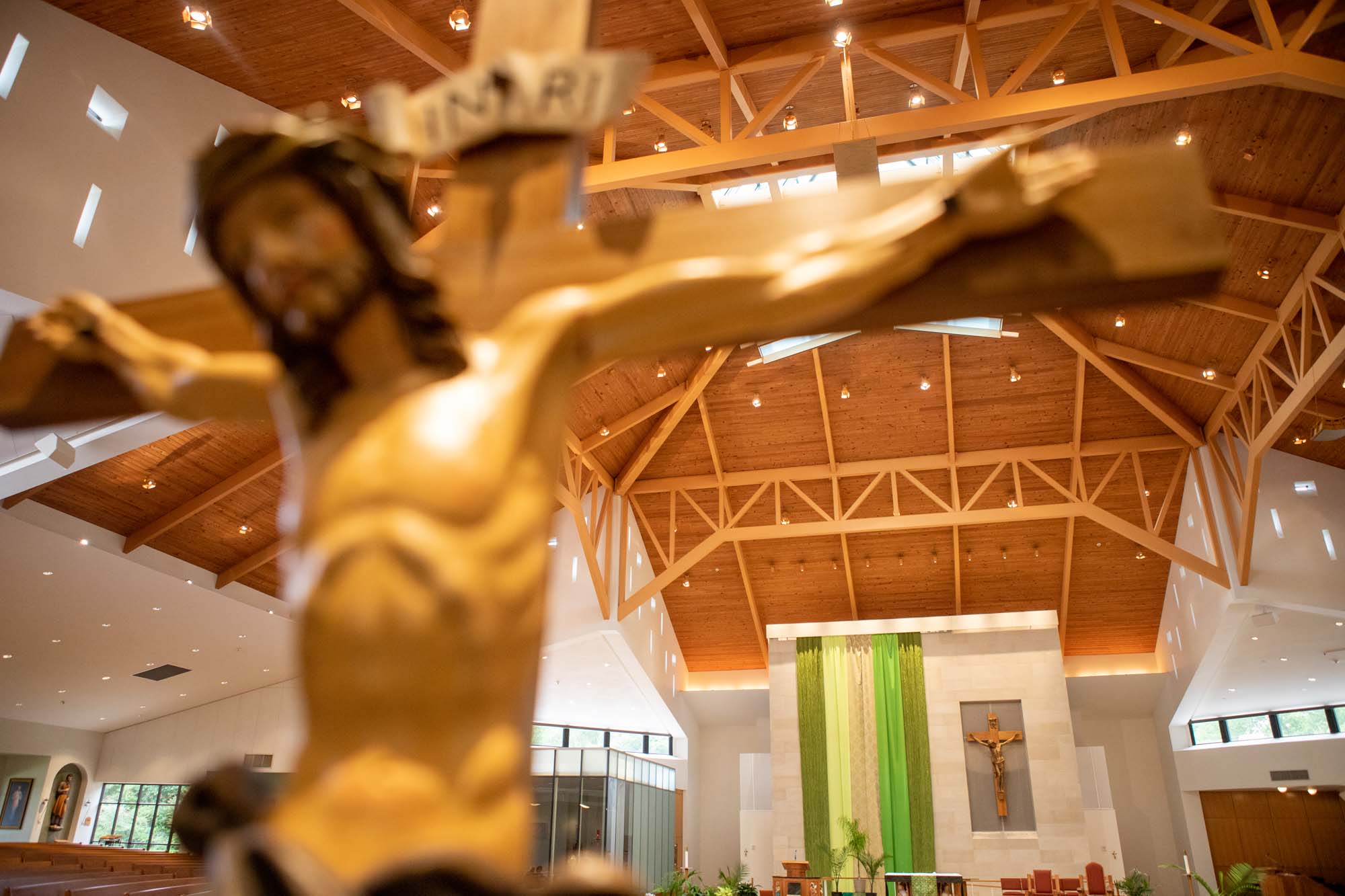 The processional crucifix is seen inside the sanctuary at St. Ignatius of Loyola Catholic Church in Spring on a recent summer afternoon. Five years ago, two priests entered the church to find chest-deep water flowing past the parish pews and surrounding the altar. The rushing water, brought on by Hurricane Harvey’s record-setting rainfall, knocked down the tall crucifix from its base, breaking it apart.

‘The light is always on during hurricane season’

If you didn’t know that St. Ignatius of Loyola Catholic Church in Spring had flooded during Hurricane Harvey, now you might not be able to tell.

But in the parish’s reverent Lady Chapel, a sacred space dedicated to the Blessed Mother in varying devotions, a votive candle flickering at the feet of a sparkling statue of Our Lady of Prompt Succor will indicate that it is indeed hurricane season.

Every June 1 since Harvey, parish officials light the candle asking for the intercession of the patron of Louisiana and against all storms. The statue of Our Lady of Prompt Succor arrived the day the parish was re-dedicated by Daniel Cardinal DiNardo in May 2018.

The parish, like St. Francis of Assisi and several other parishes, was catastrophically flooded by Hurricane Harvey. Almost five years ago, Father Norbert Maduzia, pastor, and Father Khoi Le, then parochial vicar, entered their church and found it filled like a fish bowl.

They had met with a parishioner with a boat and moved through high water to the church and found floodwaters from nearby Cypress Creek rushing through. Water entered from the front, pushing past the parish’s large wooden doors, and from the back, coming through the church’s music suite room doors.

Through a Facebook livestream that would eventually become a viral account of Harvey’s destruction, Father Maduzia’s showed water nearly cresting over the first pews. Viewers watched as he entered the church narthex to find the parish’s processional cross knocked over by the rushing water.

Father Maduzia picked up the cross to reveal that the corpus, or the body, had snapped off the cross at the arm and was then floating face down in the floodwater. “Everything’s just broken,” viewers heard him say as Father Le quickly picks up the carved body of Christ.
Parish officials restored the cross, and today it’s used in every celebration of Mass to lead the procession, perhaps a symbol of faith and confidence in Christ.

On a recent summer First Friday of the month, in the lull between vacation and the school fall semester, faithful flocked to the parish’s Reservation Chapel for prayer and an encounter with the Lord in the Blessed Sacrament, which included Evening Prayer and Benediction.

One by one, parishioners and visitors filtered through, bringing faith and devotion to a place once filled with destruction and disaster, all saying together at Evening Prayer: “God, come to my assistance; Lord, make haste to help me.”