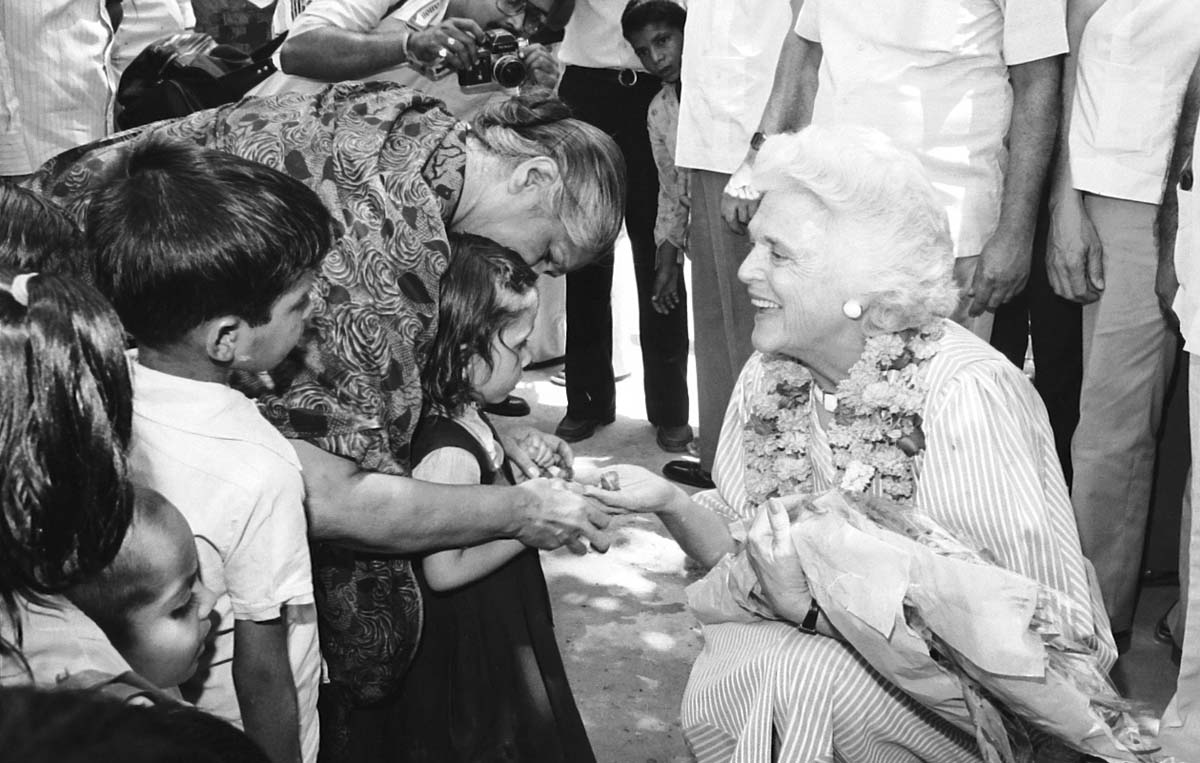 “In so many ways, she was a faithful citizen besides being an outstanding wife and mother,” said Archbishop Fiorenza of Mrs. Bush, who passed away in Houston April 17 at the age of 92.

He focused on her life of service that continued long after she left the White House when her husband George H.W. Bush served as the 41st President of the United States from 1989 to 1993.

“We’ve been blessed in this city to have Barbara Bush as an outstanding example of a person who is truly involved in the city. You know, she could have set back and enjoyed life for 10, 15, 20 more years. But she got involved. She got involved in education. She got involved with children who needed to learn how to read and write,” he said.

“Her life has been an outstanding example of what it means to be a devoted wife, a devoted mother and a very involved citizen —a very, very faithful citizen of Houston. We were so blessed to have her with us and to have the type of example that the Bush family offers the nation,” he said.

Daniel Cardinal DiNardo also shared his sympathies along with a message that he received from the Holy Father.

Cardinal wrote, “Along with all of the faithful of the Archdiocese of Galveston-Houston, I would like to offer my prayers and heartfelt condolences to the Bush family following the death of Mrs. Barbara Bush. In life, Mrs. Bush was a model public servant and set a standard for her unwavering and loving devotion to both family and community. Even her family’s generous and compassionate decision to invite the public to her viewing to say their farewell touchingly demonstrates how much she has been part of the Houston community.

“Her tireless goodwill efforts and charity throughout Houston in recent years made a tremendous impact on countless families and individuals in need. She was bold and steadfast in her convictions and an inspiration to anyone in faithful service of helping others. May the glory of the Risen Lord transform our sorrow into serenity.”

“Pope Francis offers heartfelt condolences and the assurance of his prayers to President Bush and to all her family,” Cardinal Parolin said. “Commending Mrs. Bush’s soul to the merciful love of Almighty God, His Holiness invokes upon all who mourn her passing the divine blessings of strength and peace.”

Officials estimated about 2,500 people waited in line to pay respects and walked past a casket holding Mrs. Bush during an April 20 public viewing at St. Martin Episcopal Church. The heartfelt outpouring from the public prompted former President Bush to make an appearance.

Family spokesman Jim McGrath reported that Bush was watching live television video from the Houston church and was “very touched” by the images he saw. McGrath says Bush told his staff that he wanted to go to the church himself. McGrath said, “It was entirely the president’s idea to go there.”

Bush was at the church for about 15 minutes, shaking hands and accepting condolences with dozens of people from his wheelchair, near his wife’s casket. The couple were married for 73 years.

About 1,500 invited guests attended the funeral for Barbara Bush at St. Martin’s Episcopal Church in Houston where she was remembered as a loving wife, mother and friend with a good sense of humor. In eulogy remarks, Former Florida Gov. Jeb Bush described his “precious mother” as someone who “filled our lives with laughter and joy.” “She was our teacher and role model on how to live a life of purpose and meaning,” he said.

Barbara Bush was buried in a private ceremony at a family plot on the grounds of the George Bush Presidential Library and Museum in College Station. She was buried beside her daughter, Robin, who died in 1953 of leukemia at the age of 3.