Jeanemarie Mayfield, Special to the Herald 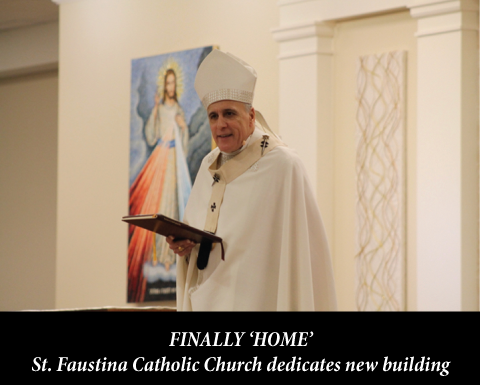 Daniel Cardinal DiNardo leads the blessing of St. Faustina Catholic Church in Fulshear. Mass will now be held at the new building. At top, the new church building welcomes visitors and parishioners at 28101 FM 1093. For additional photos from the Dedication Mass, visit saintfaustinachurch.org. Photo courtesy of Jeanmarie Mayfield.

“Your parish is beautifully and culturally diverse,” he remarked. “Let the richness of the cultures build you up into one Catholic faith.”

Father Dat Hoang, founding pastor of St. Faustina Catholic Church Fulshear, concelebrated the Mass with Cardinal DiNardo, along with other neighboring pastors and priests supporting the newest parish in the Archdiocese.

“Seems like yesterday when you called me into your office and asked me to pray about going out and starting a parish in a place I never heard of before — Fulshear,” Father Hoang said to Cardinal DiNardo in his closing remarks following the Mass. “Little did I know that you sent me to a community that is amazingly generous, talented and faith-filled. And here we are two and half years later full of tears and laughter. There has been much work, prayers, planning and sacrifices. And now we finally have a place we can call home. God is good.”

St. Faustina Church was officially established in August of 2014. The church had been celebrating weekend Masses at nearby Hubenak Elementary School in Richmond before moving to their new residence.

Father Hoang thanked all the dignitaries, builders, architects, ministers and priests attending the dedication Mass for their support. He also extended a special thanks to the building committee — specifically acknowledging Cliff Aldrich, the committee chair, for pouring “his entire energy and life” into the project. In addition, Father Hoang expressed his gratitude all of the staff, volunteer teams and organizations for their efforts in preparing for the celebration.

“The great thing about starting a new parish is that at least for the first few years, no one can say to you, ‘Father, we have always done it that way.’” Cardinal DiNardo said as he began his homily. “The big challenge is to take people from other places and gather them into one parish of the Body of Christ.”

Beyond the building structure itself, Father Hoang said he sees a “beautiful, spiritual temple. This community will come together in Christ in service, prayers and worship. Where all souls come and find a refuge and are transformed by the mercy and love of Christ. This is our mission.”
Cardinal DiNardo related the readings to the consecration of the altar. He described the consecration, which includes the anointing with chrism and then by incensation of the altar, which will spread throughout the sanctuary. The altar will then be dressed for the first time and the candles will be lit. According to church custom, the sanctuary had been lit by natural light until this time.

“You have a beautiful patroness for this parish in St. Faustina,” Cardinal DiNardo said. “She who perfected and brought to the whole Church the notion of Divine Mercy.” The devotion to the Divine Mercy was spread by Karol J. Wojtyla, a polish priest later to become St. John Paul II. “The beauty of the Divine Mercy is reflected in the altar table, which we are about to consecrate, with the rays of mercy coming forth from Christ.”
Parishioners formed first impressions as they prepared for the dedication of the new parish building. As they entered the building, their new home, many were overwhelmed to tears.

“When I first entered, my first impression was ‘simple, warm and beautiful,’” Katyna Reyes said with a huge smile. “I can’t wait until it is filled with our fellow parishioners.”

“Although I have never been here before, I felt like I was home,” Norma Garza said.

“It just opens up and the serenity puts me at peace,” Edison Arnold said. “The altar is beautiful.”

“It’s really pretty,” said Elaine Tee, a high school student who attended the dress rehearsal for the Dedication Mass. “I was surprised how big it is. I like all the monuments and the pictures on the walls. I was so surprised by the altar. The chairs are comfortable and they have kneelers.”
At Hubenak Elementary, Mass attendees were asked to stand during the kneeling portions of the liturgy due to seating limitations.

“Walking into our new church took my breath away and brought tears of joy,” said Patti Dillingham when she came to help the Arts and Environment Ministry set up. “What an incredible journey these last couple of years has been and so much more to come.”

At the dedication Mass, Father Hoang thanked the people of St. Faustina for making this dream a reality.

“What we see today is indeed a living testimony of God’s mercy and remarkable tribute to the talents, sacrifices and the goodness of the people,” Father Hoang said.