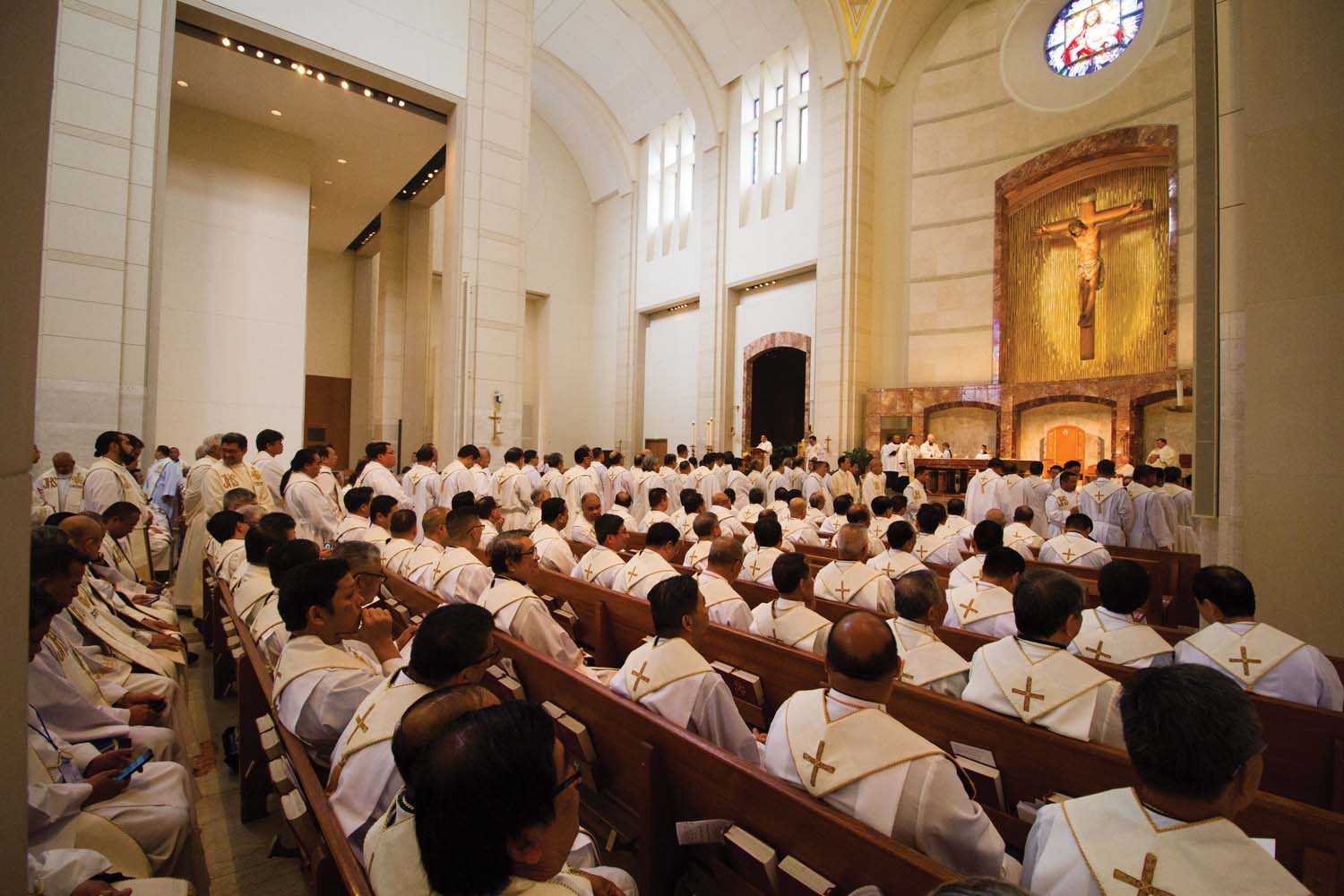 At right, more than 330 priests concelebrate Mass with Daniel Cardinal DiNardo at the Co-Cathedral of the Sacred Heart in Houston Nov. 9. Also in attendance was Bishop Larry Silva of Honolulu, Bishop Joseph Perry of Chicago, the first Filipino bishop in the U.S., Bishop Oscar Solis of Salt Lake City and Bishop Robert McElroy of San Diego. Photo by James Ramos/Herald.

HOUSTON — Part reunion, part crash course in Church teaching and navigating the current political climate both in the U.S. and back home in the Philippines, and part celebration of all things Texas, a national assembly for Filipino priests brought faith and culture full circle in Houston.

Despite concerns following Harvey, plans came together to have the assembly in Houston Nov. 7-10. It drew 330 Filipino priests and countless volunteers.

In their addresses, Cardinal Roger M. Mahony, retired archbishop of Los Angeles, and Cardinal Daniel N. DiNardo of Galveston Houston, who is president of the U.S. Conference of Catholic Bishops, encouraged the Filipino priests to stand for and support fellow immigrants, both Filipino and non-Filipino alike.

Other speakers included Auxiliary Bishop George A. Sheltz of Galveston-Houston; Archbishops Charles J. Chaput of Philadelphia and Gregory M. Aymond of New Orleans; Bishops Larry Silva of Honolulu, Joseph N. Perry of Chicago and Robert W. McElroy of San Diego; and the first Filipino bishop in the U.S., Bishop Oscar A. Solis of Salt Lake City. Many of the prelates also celebrated Masses throughout the conference.

Father Eurel Manzano, pastor of St. Theresa Catholic Church in Sugar Land, said Cardinal Mahoney addressed “squarely a reality that’s very much in the front of the consciences of many Filipino Catholics,” especially those tangled in the U.S. legal system.

Father Manzano, who served on the association's national leadership council as vice president, also said the conference worked during the gathering's downtime, offering the visiting priests a chance to reconnect many family and friends who may live in Houston, or simply to visit with former seminary classmates or town mates.

With the support of the United States Council of Catholic Bishops (USCCB), priests should be unafraid to listen to the Gospel and the voice of Jesus and “have to be unafraid to present in positive ways, the immigration teachings of the Church,” Cardinal Mahoney said. “We really have to be leaders among our people and in our communities.”

In September, the future for 22,000 young Filipinos in this country without legal documents blurred after the Trump administration announced the scrapping of the Deferred Action for Childhood Arrivals program, or DACA, and the Deferred Action for Parents of Americans and Lawful Permanent Residents program, known as DAPA. President Donald Trump said Congress would have to act to keep the programs.

The Filipino group represents a small portion of the 800,000 young people brought to the U.S. as children who have been protected by DACA since President Barack Obama created the program by executive order in 2012. They along with their parents and countless family members have been hoping for a path to citizenship.

On Sept. 12, the USCCB urged Congress to pass legislation “as a prompt, humane and durable solution to this problem of greatest urgency” and asked the administration to “show mercy and compassion for those seeking refuge, and to advance the American value of freedom through providing safe harbor to those fleeing tyranny and religious persecution.”

Even with the Oct. 5 deadline to apply for DACA renewals now passed, Cardinal Mahoney echoed the USCCB and encouraged the Filipino priests to support and find better ways to communicate the value of immigrants to our communities.

By 2013, the Philippines was the fourth-largest country of origin of immigrants in the U.S. accounting for at least 1.8 million people, or 4.5 percent of the immigrant population, according to the Migration Policy Institute. That population is the third-largest foreign-born immigrant group from Asia, after India and China, with most Filipino immigrants residing in the U.S.

“It’s a very pastoral dimension of our ministry as priests to accompany those who may be in situations where... they just don’t know where to turn,” Father Manzano said. “And so the Church should rightly be a resource for those who might need help.”

During his homily at Mass Nov. 9, Cardinal DiNardo told the Filipino priests that they must accompany the faithful in all things, especially in hard times, using the dimensions of the priesthood as “stewards, contemplative heralds of sacramental life.”

Reflecting on the teachings of the early Church fathers, he also reminded the priests that they must have the support of God’s holy people, the faithful, to be close to Christ.

The people of God hold priests up to the wounded side of Christ, he said, so that the blood and water of baptism and the Eucharist are given especially to priests. Priests won’t stay there, he continued, if they “don’t have the prayers and the cooperation and energy of God’s holy people... Many priests think they can do it on their own, but the waters flow for all.”
Priests, he said, “need, desire and want the cooperation, zeal and energy of the people to be equal to the zeal of Christ.”

“I am grateful to you disciples, Filipino disciples of the Lord, brother priests,” Cardinal DiNardo said. “I, with most other bishops in this country, would not be able to do our ministry as well without your collaboration.”

The next National Assembly of Filipino Priests of the U.S. and Canada will be held in New Jersey and New York in 2020. For more information about the NAFP, visit www.nafp-usa.org.