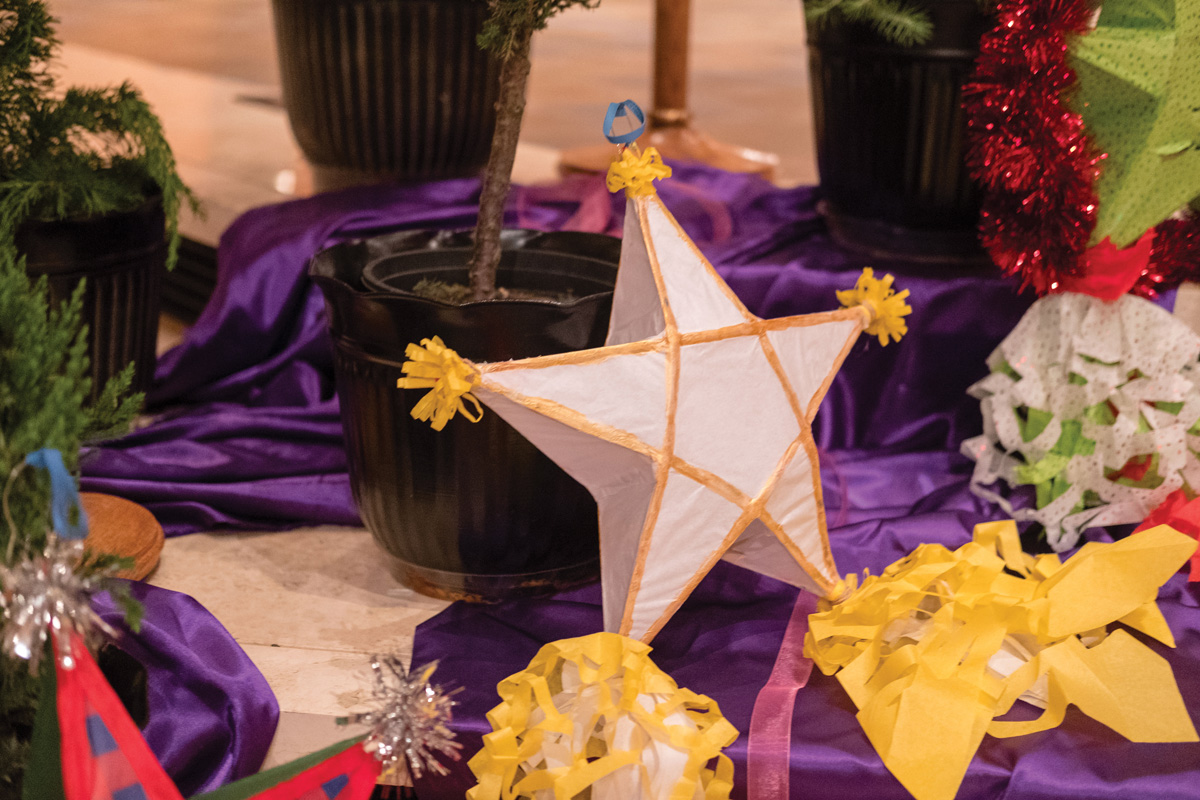 A Filipino parol, or a paper lantern, sits among others on the altar at a past Simbang Gabi Mass. St. Angela Merici Catholic Church, located at 9009 Sienna Ranch Rd. in Missouri City, will host the final Simbang Gabi Mass on Dec. 23 and 7 p.m. Pre-registration is required. For a tutorial on how to make your own parol at home, scroll down.

HOUSTON — Less than five seconds into a recent Disney UK Christmas animated short, Filipinos — no matter where they are in the world — will immediately recognize iconic sounds and sights of the Philippines.

Calls for “taho,” a Filipino silken tofu dessert, are heard as lanterns, or parols in Tagalog, softly glow above a 1940s Filipino streetscape near the steeple of a large church.
A young girl greets her elder by asking for mano, a gesture of respect where she places her forehead against the back of his hand to receive his blessing, another major Filipino tradition.

These paper lanterns are hallmarks of the Christmas season in the Philippines. Dozens are strung high and low throughout every “barangay,” or neighborhood or village, handmade and sharing a warm, comforting light in a darkened neighborhood. The short explores the relationship between generations of Filipinos who have since moved abroad but still keep connections to Filipino traditions from the Philippines.

Come Dec. 23 at 7 p.m., when Filipino Catholics will gather at St. Angela Merici Catholic Church, located at 9009 Sienna Ranch Rd. in Missouri City, for the final culmination Mass of the Simbang Gabi tradition, the guiding light of dozens of parols around the region will point to Jesus ahead of the Christmas feast day.

Since Dec. 15, some 17 parishes throughout the Archdiocese have been celebrating the Simbang Gabi tradition, a beloved Filipino custom that includes a novena of Masses held in anticipation of Christmas that celebrates the birth of Jesus.

Though the Mass is traditionally celebrated at dawn before farmers would head out to the fields, the Masses are now celebrated in the evening in the U.S. so that more may attend later in the day.

The Mass will also be livestreamed for those who cannot attend. For more information and for the livestream link, visit www.simbanggabi-houston.blogspot.com.