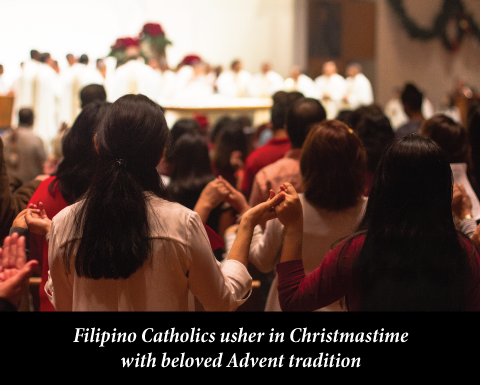 During his homily, Cardinal DiNardo encouraged those attending to realize that during Advent, “there is a point... where you must say He must increase and I must decrease.” Simbang Gabi Masses started Dec. 15, ending with this Culmination Mass.

Cardinal DiNardo thanked and encouraged families who brought their children to the Filipino celebration.

“You bring an enrichment to our Catholic culture and you must explain to your children why we do this,” he said. “You also bring a part of the Pacific that we need in this city.”

Clarissa Garcia, a parishioner of St. Anthony of Padua Catholic Church in The Woodlands and member of the Filipino Ministry Council, said preparations for next year’s Simbang Gabi begin while the Christmas tree is still up in most homes.

“We’re preparing the way for God to join us, when He became flesh,” Garcia said. “It’s a time to prepare ourselves and really look inside our hearts and souls to find out if we’re ready to accept Jesus when we become one.”

Simbang Gabi, a beloved Christmas tradition for Filipino Catholics, is a devotional novena of Masses offered in anticipation of the Nativity and in honor of the Blessed Virgin Mary. In the Philippines, the Masses are usually held in the early hours of the morning, but in Houston the Masses are celebrated in the evening to allow more to attend.

At the end of Mass, Cardinal DiNardo implored the many Filipinos who work in the medical fields and “healing arts” to bring a presence to those who are sick and in need, especially because of the culture “where people... are being reduced to pure matter and statistics.” He said those who do this will be doing the work of Jesus, John the Baptist and the Virgin Mary.

Following the Mass, which featured traditional Filipino worship led by the Couples for Christ choir, a meal of Filipino food and beverages was served. During the reception, it was announced that the third annual national assembly of the National Association of Filipino Priests will be held in Houston Nov. 7 to 10, 2017, which will be attended by some 800 Filipino priests from across the country.

There are an estimated 50,000 Filipino Catholics in the Archdiocese.

For more information about Simbang Gabi and other events, contact the Filipino Ministry Council at fmc.houston@sbcglobal.net.