FATIMA 100: Catholics honor Our Lady of Fatima across the globe 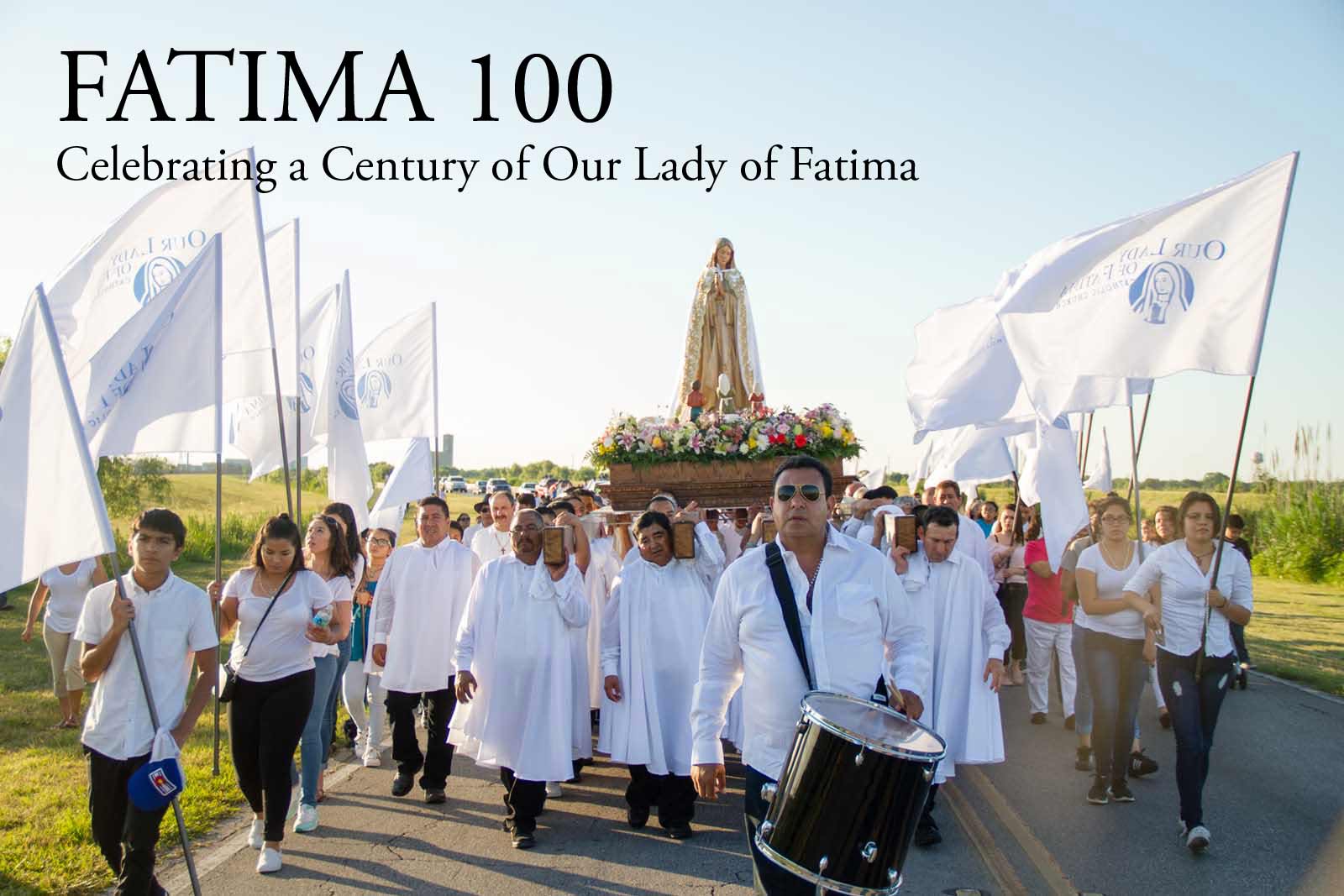 Hundreds of thousands of Catholics around the world joined Pope Francis in honoring the 100th anniversary of the Marian apparitions at Fatima, including thousands in the Archdiocese.

Between May 13, 1917, and Oct. 13, 1917, Mary appeared on six occasions on a field to Lucia dos Santos and her cousins, siblings Francisco and Jacinto Marto, who are now saints. Catholic communities across the world celebrated the centennial anniversary of these apparitions.

Slowly moving down Main Street in Galena Park in east Houston, a steady drum beat beckoned dozens of men forward, each bearing the weight of a large platform carrying a statue of Our Lady of Fatima on their shoulders.

Photos: Thousands celebrate Our Lady of Fatima across Archdiocese

Dressed in white, hundreds of parishioners of Our Lady of Fatima Catholic Church walked in a massive procession of nearly three miles honoring the parish’s namesake May 6.

Beginning in Jacinto City just off Interstate 10, the procession moved down Mercury Drive. Passing churches of other Christian denominations, several speakers projected the procession’s Rosary recitation into the surrounding neighborhoods, drawing onlookers and encouraging others to join the movement.

The blocks-long procession ended with Mass and songs to honor the Blessed Virgin Mary at Dement Field where a larger-than-life balloon Rosary flitted about the Astroturf field.

Arriving at the stadium, the procession continued around the track, finally ending with preparations for Saturday’s vigil Mass. Parishioners handed out Rosaries and Our Lady of Fatima prayer cards to those who attended the Mass under the bright football stadium’s spotlights. 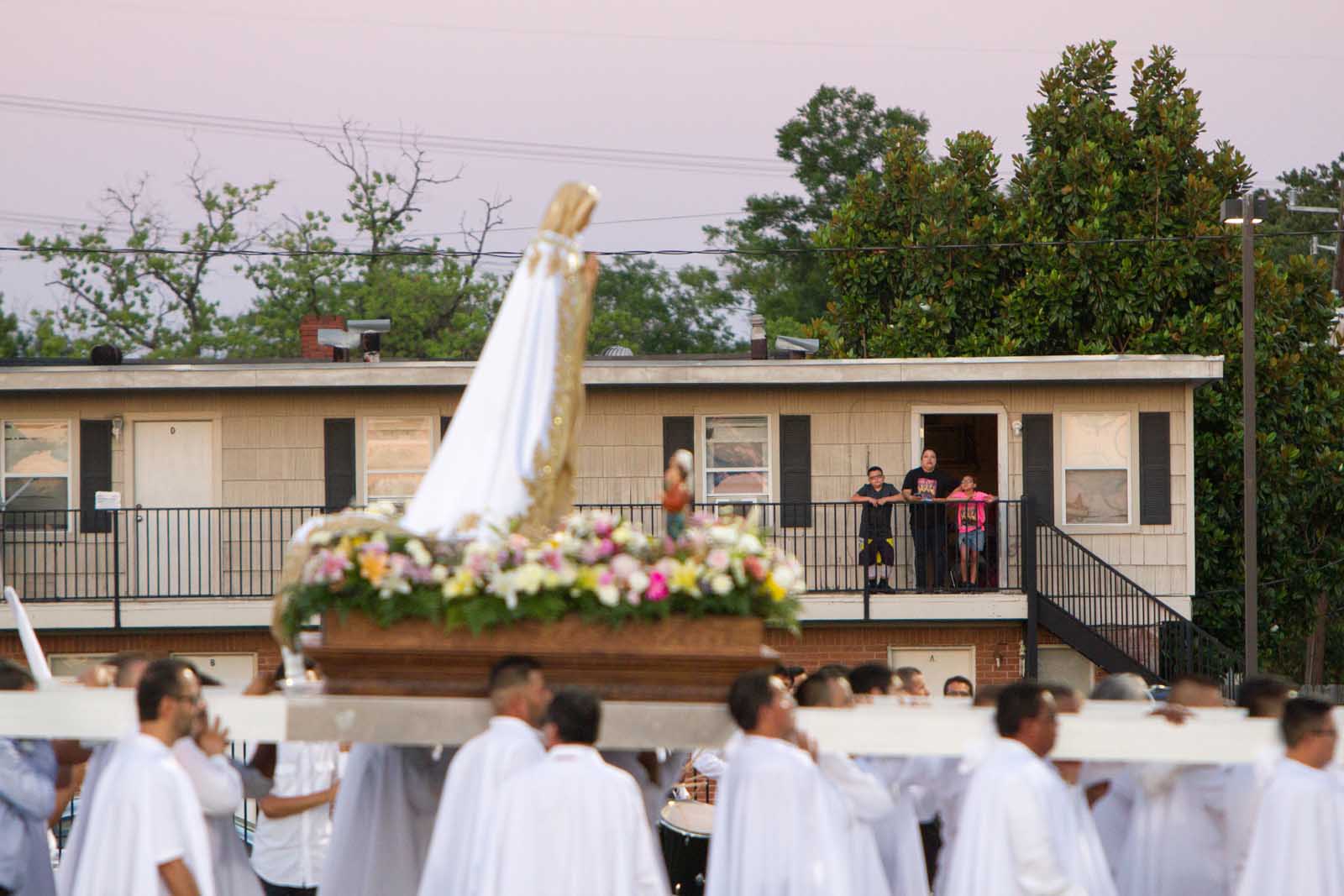 Onlookers watch as men carry a statue of Our Lady of Fatima in Galena Park May 13.

The evening ended with a crowning of Mary and flashlight serenading of the Blessed Virgin Mary, with parishioners singing songs to Our Lady of Fatima, including the famous “Las Mañanitas,” alongside cries of “Viva La Virgen de Fatima! Viva Cristo Rey!”

Youth honored the Blessed Virgin Mary by playing traditional Vietnamese drums before a procession moved through the city streets.

Set with a dramatic backdrop of downtown Houston’s skyscrapers and speakers playing traditional Vietnamese prayers and chants, parishioners escorted a large golden reliquary that contained several relics of the Vietnamese Martyrs, a popular devotion and symbol of the country’s sacrificial faith. 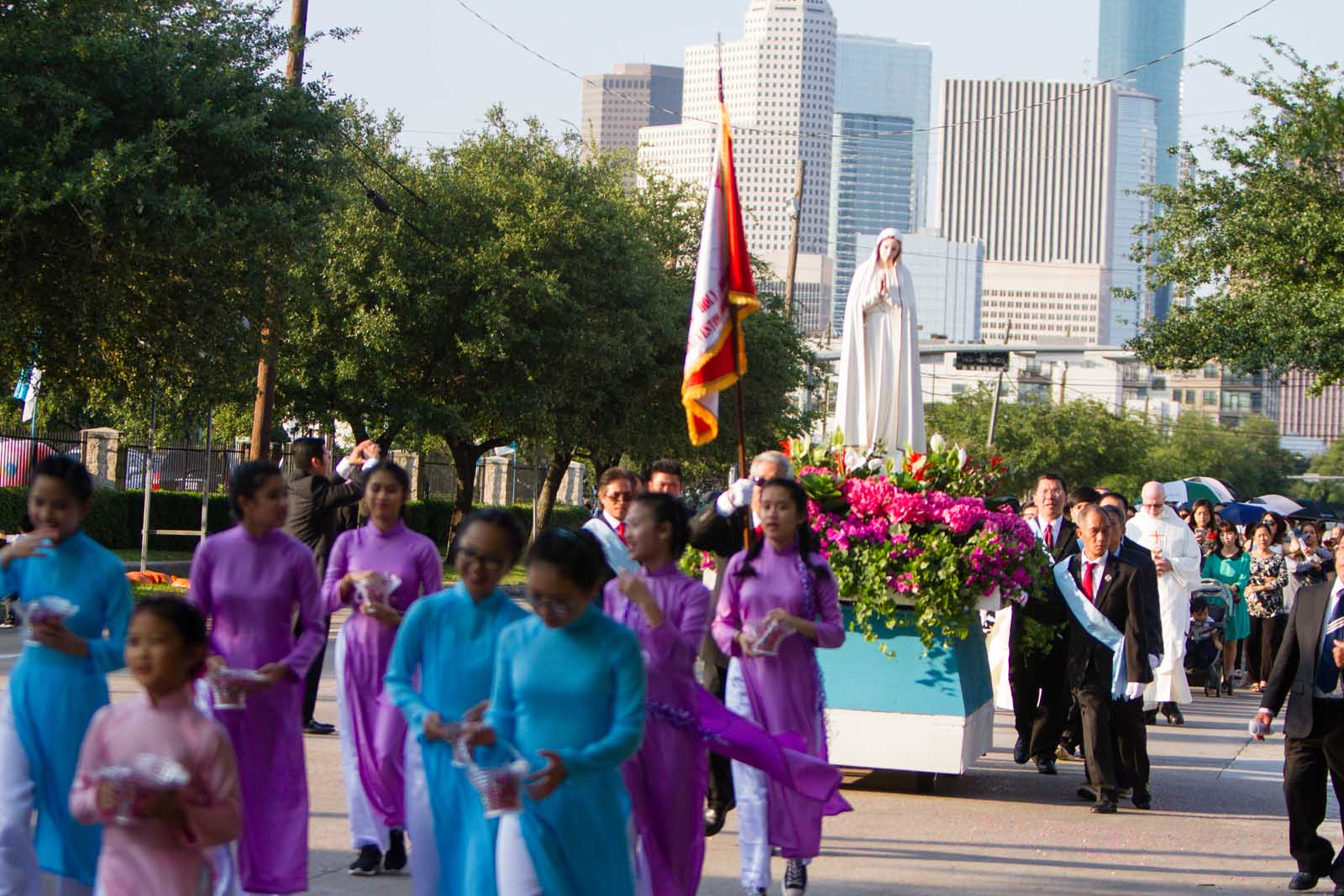 Young girls from Holy Rosary Catholic Church in Houston dressed in traditional Vietnamese ao dai clothing procession before a statue of Our Lady of Fatima in Houston May 14. Photo by James Ramos/Herald.

Set on a rolling pedestal, a statue of Our Lady of Fatima followed the long procession, led by dozens of consecrated religious women and men. Parishioners carried banners and flags proclaiming the faith of Our Lady of Fatima, while young girls scattered confetti and flowers along the road in front of the statue.

The procession ended in the parish parking lot with a traditional flower dance to honor the Blessed Virgin Mary, a balloon release and an outdoor Mass celebrated by the Dominicans who run the parish.

That same weekend, Pope Francis traveled to Portugal to visit the Shrine of Our Lady of Fatima where Mary appeared a century ago.

Mary’s example of believing and following Jesus is what matters most; she cannot be some image “of our own making” who Christians barter with for mercy, Pope Francis said.