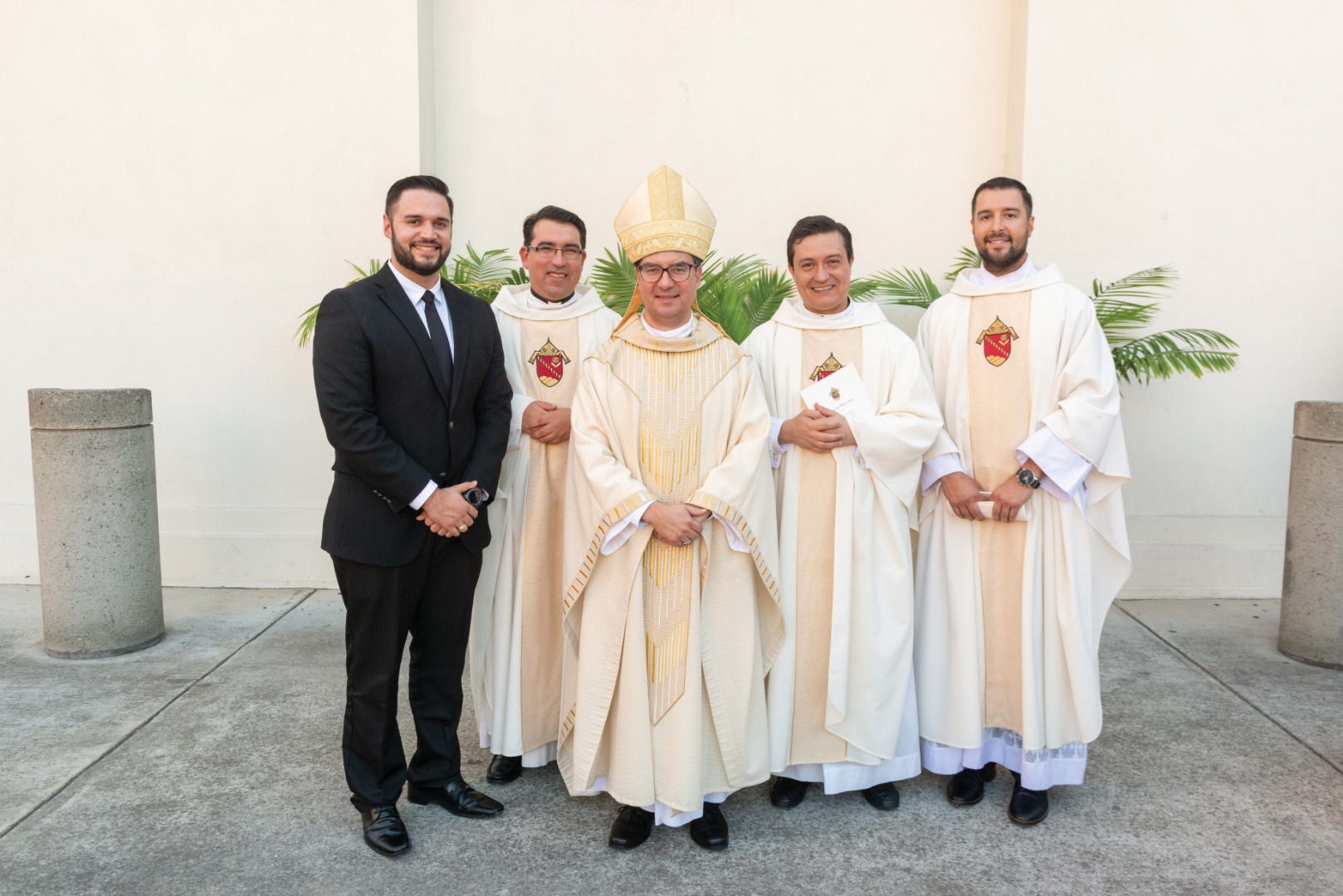 In a multitude of vocations among one family, newly installed Bishop Coadjutor Oscar Cantú of San José, California (center) is surrounded by his nephews from Houston and second cousins from Mexico. From left to right, Seminarian Jacob Ramirez of St. Mary’s Seminary in Houston; Father Gabriel Guajardo, LC, studying in Rome; Bishop Cantú; Father Mauricio Guajardo, LC, working in the Philippines; and Father Nicolas Ramirez, parochial vicar at St. Bartholomew Catholic Church in Katy. Photo courtesy of Jen Vazquez for the Diocese of San José.

HOUSTON — Triple blessings are upon a Houston-based family celebrating a bishop, a priest and a seminarian among their members.

Bishop Oscar Cantú, about to turn 52, was recently welcomed as coadjutor bishop of San José, California. His family traveled to witness his installation, including his nephews Father Nicolas Ramirez and Jacob Ramirez, a seminarian studying at St. Mary’s Seminary in Houston.

In an interview afterward with the Texas Catholic Herald about vocations, Bishop Cantú said, “So many people are looking for ways to grow. They are hungry to learn more about faith and make those commitments.”

Among those making such commitments are his nephews following their callings — Father Nicholas Ramirez, ordained two and a half years ago and now assigned as parochial vicar of St. Bartholomew Catholic Church in Katy, and the priest’s brother Jacob in the seminary.

While Father Nicolas definitely credits his uncle as a positive influence, he also credits the encouragement of his own parents Manuel and Leticia Rodriguez.

“Through my parents, I learned the importance of deep faith, especially from my mother. She is a saint,” Father Nicolas said of Leticia, the older sister of Bishop Cantú.

Even in light of the sexual abuse issue, both the bishop and priest are praying young people remain interested in going into vocations and giving their life to the Lord.

Father Nicolas said, “We now need a truly heroic priesthood. I know some priests who are thinking twice about wearing their collars in public, but we need to reclaim the goodness and repair the damage done by atrocities.”

He has been wearing his collar even when traveling, including at the airports, and has received looks, but only positive comments. He added, “We need to be credible witnesses to our faith.”

The bishop has also dealt with the issue more than once.

Bishop Cantú said, “I remember finishing up my studies in Rome in 2002 when the Boston investigation first came up and the news was awful. None of us in my class wanted to come back to the United States because we thought morale in the Church had plummeted.”

“But we found just the opposite. Churches were full and support was tremendous,” he said. “Seminaries began to fill up and we saw a surge of people wanting to help.”

Bishop Cantú said he is hoping that the latest revelations of abuse and the alleged cover-up by some bishops will be resolved and the Church will be cleansed.

“The Holy Spirit works in strange ways we don’t understand. We can only offer prayer, fasting, penance and encouragement. We trust in God to bear fruit at the proper time,” he said.

Jacob Ramirez is among that fruit — studying in the seminary and scheduled to be a transitional deacon in two and a half years and then ordained a priest, “God willing,” his brother priest says, in 2022.

“We’re being open and honest (at the seminary) about the abuse issue with dialogue among our brothers, spiritual directors and faculty,” Jacob said. “Some of us are fasting along with abstinence and penance on behalf of the needs of the Church.”

As part of his apostolic ministry, Jacob is teaching RCIA at St. Jerome Catholic Church. “People are still enrolling and wanting to become Catholic by the grace of God,” he said.

Although inspired by his uncle and brother and growing up in a family where prayer and faith played important roles, it wasn’t until his senior year of college that Jacob opened himself up to the idea of priesthood.

“In 2009, at Texas Tech University, I was at a Sacrament of Reconciliation when I heard a call from God, actually a priest, who planted the seed to ‘consider the priesthood,’” he said.

Jacob said he was surprised about his personal calling and began teaching at Catholic schools, including two years of Spanish at St. Rose of Lima Catholic School. He continued his discernment, prayed, sought counsel through clergy, found a spiritual director and eventually decided to apply to seminary.

“I realized how blessed I am because I’ve grown closer to God and have come to a better understanding of myself as a man of God,” Jacob said.

But that doesn’t mean he doesn’t have fun. He and several fellow seminarians formed a band in which he plays guitar and they recently performed at the Revention Music Center as part of the Fifth Annual Concert for Life.

Before the Bishop’s recent installation in California, Bishop Cantú also enjoyed a vacation with Father Nicolas — visiting a family in Ecuador who had befriended and hosted the bishop when he had previously studied there.

He attended Holy Name Catholic School and St. Thomas High School. After receiving his masters in Divinity and in Theological Studies from the University of St. Thomas in Houston, he taught there. In his priestly career, Bishop Cantú was first assigned as parochial vicar at St. Christopher Catholic Church and served as pastor at Holy Name Catholic Church, the parish of his own Baptism.

As bishop, he also served on several committees of the U.S. Conference of Catholic Bishops, and traveled around the world to represent those committees as he visited churches in the most troubled areas of the Middle East, Africa, Latin America and Asia.

When Bishop Cantú addressed the V Encuentro at the end of September, he arrived exhausted from being in the midst of transitioning as bishop of Las Cruces, New Mexico, and traveling to become Coadjutor Bishop of San José.

While at Encuentro, he attended the special dinner that the bishops organized specifically for young adults in anticipation of the Synod on “Young People, the Faith and Vocational Discernment.”

Describing that night, Bishop Cantú said, “I’m packed up, in transition. I have no house, no car, no keys. I’m going directly to San José. When I arrived (at Encuentro), I was so tired. But listening to the young people around the table is what fed my soul.”

His family of many vocations continue to feed countless souls.