Families in faith celebrate Our Lady of Guadalupe feast 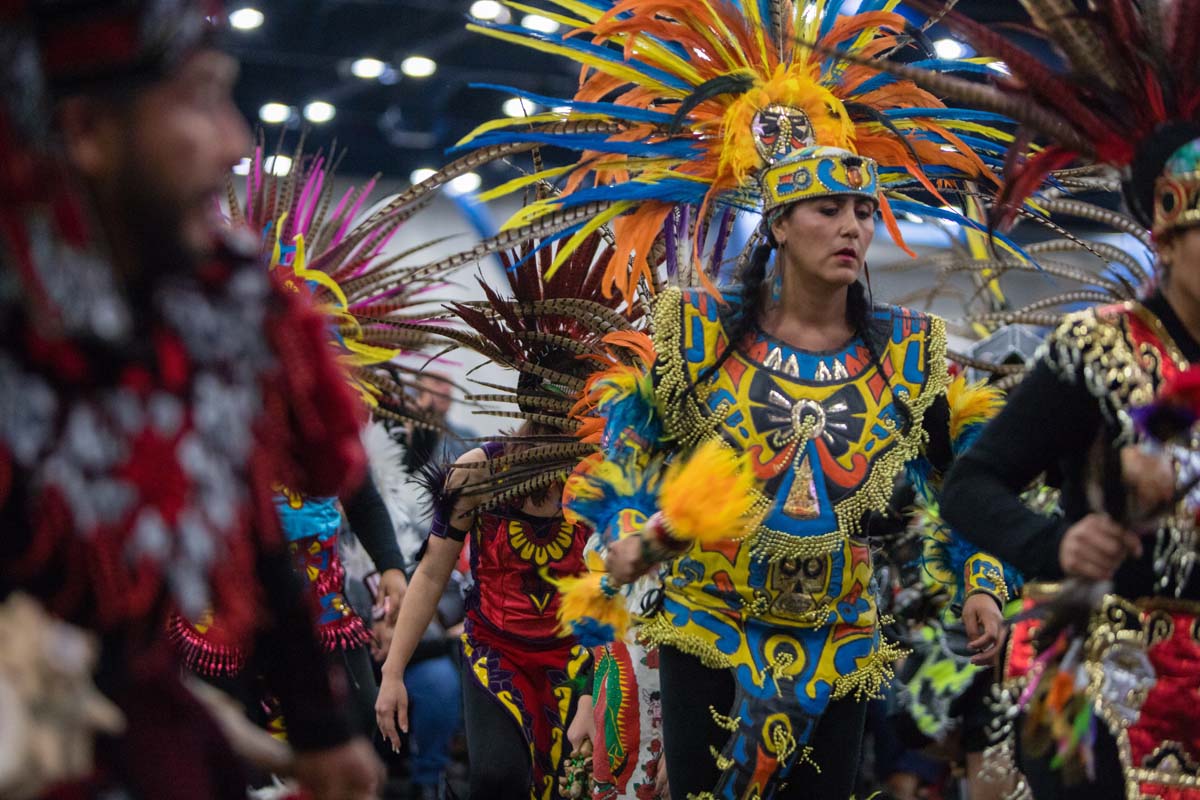 Danza Azteca dances during a celebration in honor of Our Lady of Guadalupe in Houston Dec. 9. The celebration included a procession through downtown Houston and marked the Dec. 12 feast of Mary appearing to St. Juan Diego on a hilltop in what is today Mexico City. Photo by James Ramos/Herald.

HOUSTON — Even with the spotlight on the pious image of Our Lady of Guadalupe, she points the way to Jesus, said scores of those devoted to the Patroness of the Americas celebrating her Feast Day Dec. 12.

Hundreds of dancers dressed in colorful costumes of Azteca and matachines swirled through downtown Houston streets Dec. 9 processing from the Chancery to the George R. Brown Convention Center, kicking off the Archdiocesan-wide celebration during chilly temperatures in the 40s.

The event culminated with more than 1,500 attending Mass presided by Daniel Cardinal DiNardo at the convention center. Afterward the drums exploded again as groups of dancers who had practiced countless of hours of rehearsals dedicated their choreography to Nuestra Virgen de Guadalupe.

Father Italo Dell’Oro, CRS, vicar for Clergy and secretariat director for Clergy Formation and Chaplaincy Services for the Archdiocese, gave the homily in Spanish to the predominantly Hispanic crowd at the convention center.

“Our Lady of Guadalupe is our patroness over all the Americas — North, Central and South Americas,” Father Italo told the crowd.

Quoting Vatican representative Guzman Carriquiry Lecour, Father Italo said, “She watches over us all, especially immigrants. Immigration has been a long-standing debate, and the soul of this country is at stake.”

Ending his homily, he gave the traditional, “!Viva La Virgen de Guadalupe!” with the crowd responding “!Viva!” He then added, “!Viva Cristo Rey!” and the echoed “!Viva!”

Lazaro Contreras, director of the Office of Hispanic Ministry for the Archdiocese of Galveston-Houston, said, “It is a special day where we join together to honor our Blessed Mother, Our Lady of Guadalupe, and give thanks for the blessings we have received.”

The Archdiocesan Guadalupana Association has sponsored the downtown procession for most of the 46 years in existence locally, said association President Priscella Marquez.

“This is a magnificent celebration where people of all ages show their devotion to Our Lady of Guadalupe,” Marquez said.

The celebration at individual churches then continued throughout the Archdiocese, from Dec. 11 midnight Masses to 5 a.m. singing of “Las Mañanitas,” a traditional birthday song that has reference to King David to serenade her on the dawning of Dec. 12. The Feast Day can be considered a marathon of novenas and other prayers, families said.

At her namesake, Our Lady of Guadalupe Catholic Church on Navigation was overflowing with parishioners and visitors as far away as Galena Park and Conroe. They came to lay their roses at her star-emblazoned mosaic behind the altar. They also gazed reverently in the church’s courtyard at her life-size statue with St. Juan Diego kneeling by her as children were more mesmerized by the water fall about the mound of rocks.

Among those families, Rocio Cortes brought her baby girl Leilani to take photos in front of the statue. “Our Lady is so important to us because our parents and our grandparents loved her. She is part of our faith and our culture,” Cortes said.

Parishioners decorating the church with garland and flowers before the celebration said they gladly dedicate their time. Maria Castro said, “It’s important for me to honor the Virgin and teach our children to continue the tradition.”

Deacon Juan Carlos Casteñeda said, “The prayers and novenas and adoration continue. She is at the heart of this parish, pointing the way to Jesus.”

Similarly, Pope Francis urged the faithful to make service the focus of their faith as he honored the patroness of the Americas. Speaking at a special Mass for the Virgin in St. Peter’s Basilica Dec. 12, Pope Francis said fancy words and programs aren’t necessary to spread the faith. Rather, he said, people should walk with others, particularly those on the margins, and hold each other up.

Through her image, Mary “enters in a home, in a prison cell, in the ward of a hospital, in a nursing home, in a school, in a rehabilitation clinic to say: ‘Am I not here, that I am your mother?’” he continued in Spanish.

Pope Francis is expected to highlight the Virgin of Guadalupe during a visit to Panama for the World Youth Day in January.

Our Lady of Guadalupe, patroness of the Americas and the unborn, appeared to St. Juan Diego on the Hill of Tepeyac in Mexico City in 1531, during a time of conflict between the Spanish and the indigenous people.

Mary took the appearance of a pregnant native woman, wore clothing in the style of the indigenous community, and spoke to Juan Diego in a native language, Nahuatl.

She asked Juan Diego to appeal to the bishop to build a church on the site of the apparition, stating she wanted a place where she could reveal to the people the compassion of her Son. Initially turned away by the bishop, Juan Diego returned to site asking Our Lady for a sign to prove the authenticity of her message.

She instructed him to gather the Castilian roses that he found blooming on the hillside, despite the fact that it was winter, and present them to the Spanish bishop. Juan Diego filled his cloak — known as a tilma — with the flowers. When he presented them to the bishop, he found that an image of Our Lady was miraculously imprinted upon his tilma.

Nearly 500 years later, Diego’s tilma with the miraculous image is preserved in the Basilica of Our Lady of Guadalupe in Mexico City, and visited by millions of pilgrims each year.