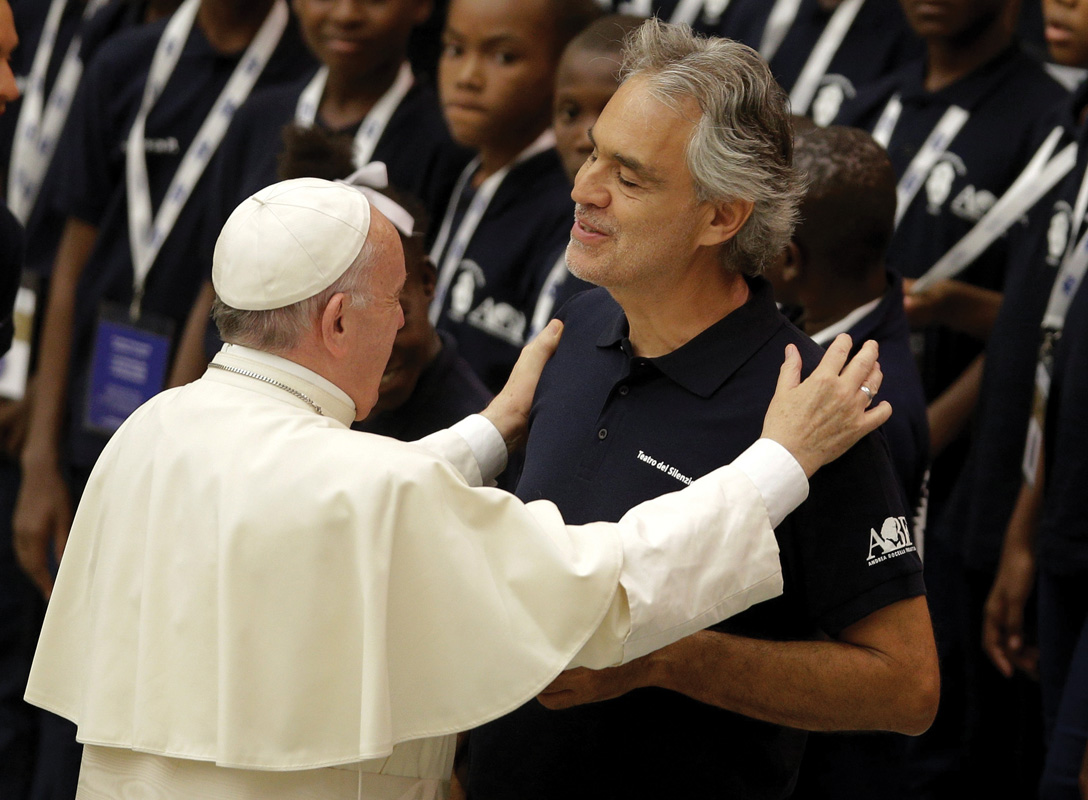 In this 2017 file photo, Pope Francis greets Italian tenor Andrea Bocelli after performing with the choir “Voices of Haiti” during the pontiff’s weekly audience in Paul VI hall at the Vatican. Bocelli sings two songs in the film “Fatima.” (CNS photo)

WASHINGTON (CNS) — Most movie patrons head for the exits once they see the closing credits start rolling.

Those who do that after watching “Fatima,” though, will miss not one, but two songs performed by the famed Italian tenor Andrea Bocelli, a Catholic.

In an email interview with Catholic News Service (CNS), Bocelli said his participation in the movie was a labor of love.

“As a Christian, I joyfully agreed to provide my contribution to develop such a moving and crucial story for the big screen as it involves our heavenly Mother Mary, consoler and mediatrix,” said Bocelli in response to questions posed in advance by CNS. His remarks were translated from the original Italian.

Bocelli has been to the Portuguese city where Mary appeared to three children over a six-month period in 1917, as World War I was raging in much of Europe.

“At Fatima, every breath becomes a prayer: I myself experienced this when, again, in 2018, I was privileged to offer my contribution as an artist as well as a believer,” to the movie, he said.

He cannot accept every offer made to him, but “when, as in this case, I realize that I am able to convey the Christian values that my family instilled in me — which I, in turn, try to instill in my children — I say ‘present’ without hesitation,” Bocelli said.

“It was a joy to be part of this project, as Mary is an ever-present and bright presence in my and my family’s life. I was able to go to Lourdes (France) as a child, and in recent years I’ve been going to Medjugorje (Bosnia-Herzegovina). I have always found poetry and beauty in the Church, attributing the central stage to a female presence that works on our behalf. I am a devotee of the Virgin to whom I always dedicate part of my prayers.”

During the closing credits, Bocelli sings “Gloria” and “Gratia Plena,” the latter written by Paolo Buonvino specifically for “Fatima.”

“As soon as he had composed ‘Gratia Plena,’ he insisted on me listening to it,” Bocelli said. “I am grateful for this because it is a profound, inspiring and genuinely beautiful song.”

“Gloria,” he added, “is able to convey the same strong message of hope and gratitude with its specificity. The song describes the miracle — and the measureless gift — represented by our earthly life and its passing by to become eternal life, which is there waiting for us like a benevolent mother. The chorus is like a mantra centered on the word ‘Gloria,’ which becomes a prayer and celebration of joyous tidings.”

Bocelli also offered his insights to CNS on how he makes the lyricist’s sentiments his own.

“To be able to interpret a piece, I have to fall in love with it. First and foremost, it must fill me with emotion so that I may do the same for those listening to it,” he said. Even when I’m not composing the music or the lyrics, if I accept to sing a piece, it is because it reaches my heart, and at that point, it becomes a part of me, it’s my own.”

When it comes to sacred music, he added, “My thought process is the same but taken to a much higher plane. Music is a universal language; it is able to express the inexpressible. As St. Augustine said, ‘He who sings prays twice.’ I humbly provide my vocal instrument to pray twice.”

In explaining what the events at Fatima mean to him personally, Bocelli said, “I believe that heaven and Fatima gave us a precious gift. The events described there carry a story that appears irrational and non-decipherable but is actually genuine, sweet and edifying. The miracle of the apparitions with the three little shepherds carries with it a message of love.”

Bocelli said he believes “Fatima” will resonate with Catholics because “it expresses the beauty that is part and parcel of goodness. The faithful might be prodded to abandon their coolness, which, at least in Europe at this time in history, is a problem,” adding, “Fatima is a universal parable of a love that comforts us all, even those who do not have the gift of faith.”

“Despite a few flaws,” believers will find “Fatima” a film with “congenial fare that’s suitable for all but the youngest viewers,” said a review by John Mulderig, CNS associate director for media reviews. He called it “a welcome affirmation of faith in the midst of worldwide challenges to health and tranquility.”