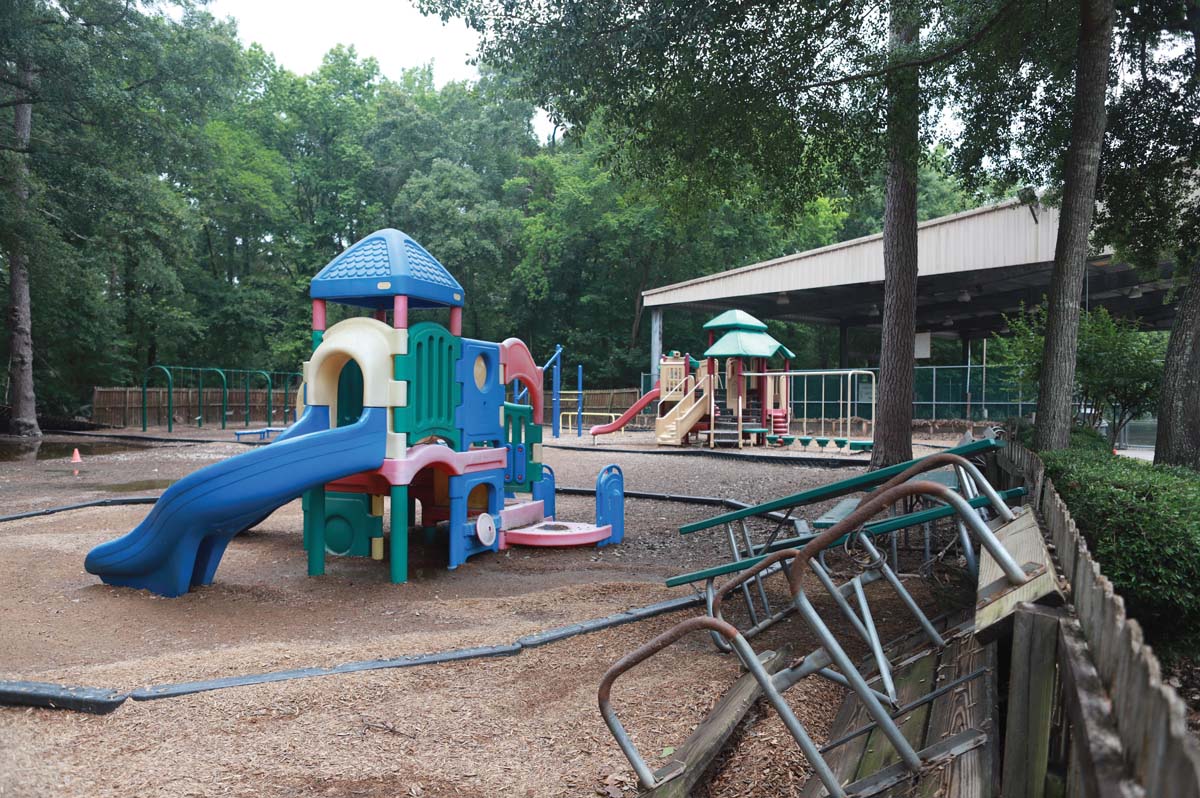 St. Martha Catholic School in Kingwood was impacted by major flooding after heavy rains pushed two to four inches of rain into the school buildings when at least 10 inches of rain fell May 7. Water from nearby Ben’s Branch flooded the playground, school and parish campus with 10 inches of rain. Photo by James Ramos/Herald.

KINGWOOD — Halfway through leading a seventh grade field trip on their first tour of the Houston Museum of Natural Science, Tamara Shurtleff’s phone lit up.

Some 30 miles away, her colleagues at St. Martha Catholic School in Kingwood were trying to reach the middle school English teacher because floodwaters from the nearby rising Ben’s Branch were about to submerge her car and they needed to move the vehicle.

But she, like her fellow middle school teacher Lorenzo Ortiz, had her keys with her at the museum in Houston, and her car — the one she had just bought on Good Friday last month — was in Kingwood.

With the situation developing back at the school, the teachers decided to leave the museum for home. The weather on that Tuesday, May 7, would vary greatly across the region, some saw just an inch of rain, while other communities, like Sugar Land and Kingwood, would see six to 10 inches of rain in just one day.

On the bus, Ortiz, the middle school’s religion teacher, led the 33 seventh-graders in prayer, praying for safety of everyone in the storms.

As their bus driver neared the school, he ran into flood water on Woodland Hills Drive, deeper than anything he’d ever seen in his 20-year driving career. Cars were stranded around them, pulling up onto medians and curbs seeking higher ground as the waters continued to rise.

Trapped, the students remained on the bus for a few hours as the faculty communicated with leadership at the school and tried to wait out the storm.

Stuck in her car, she began communicating with her staff and started to send alerts to the school parents and community about the not-so-normal rain episode happening, emphasizing the students’ safety as their first priority.

After three hours, she decided to ditch her car and waded through three feet of moving water to a nearby business to safety. In some parts of the street, the water had reached car windows. She then trekked to the school where she’d find waters also encroaching on the school’s buildings on the back of the property.

Back on the school bus, the students remained in high spirits, despite the torrential storm around them, sharing snacks. Shurtleff credits the students for handling the storm “very well,” some of whom were no strangers to high water as they flooded during Hurricane Harvey, which submerged Kingwood in 2017.

While these students were lucky to avoid the floods, some 400 homes in the Kingwood area were reported to have flooded. Like at St. Martha, homes in the area would be ground zero for renovation and repair. Eventually, teachers and members of the St. Martha community reached the school bus and safely transferred them from the bus to the school.

At the school, Shurtleff found the entire student community at the parish’s Family Life Center (FLC), as water from Ben’s Branch rushed through the school’s playground, knocking down fences and pushing bike racks and picnic tables clear across the area and moving into the school’s two buildings, with at least two to four inches flooding the structures.

Affectionately called “Lake Martha,” an impromptu lake formed when Ben’s Branch overflowed its banks. The water grew intensely on the back part of the school’s property, which shares its campus with the parish’s faith formation programs. Parish officials said the water, even during Harvey, had never entered the school buildings or been that high.

Shurtleff said middle school students bravely volunteered to carry young pre-kindergarten students through floodwaters that were moving through the school’s campus to the safety of the FLC. Staff and faculty had quickly moved into action to save as much equipment, electronics, files and records as they could before it was unsafe to stay in the flooded buildings. She said the community rallied together, some offering to help Shurtleff even get her own children from their schools and daycare.

Just a half mile away, Father Dolce saw the water also rising in the church parking lot. The parish’s church building was built on land about a half mile away from the school and faith formation campus.

As night fell, people who drove into the church’s parking lot seeking high ground moved into the church building after Father Dolce opened the church’s doors and welcomed them inside. He offered blankets, towels and snacks, and most importantly a place of safety and comfort away from the high water.

Some 20 people, like Christopher Lokey, would stay some portion of the night at the parish, waiting for the flood water to recede so they could safely make their way home in the dark.

On St. Martha’s parish Facebook page, Lokey thanked Father Dolce for his generosity as they waited out the storm.

“Thanks to St. Martha’s for opening their doors last night,” he wrote on a May 8 Facebook post. “My daughter and I stayed in the church as we were stranded. Thanks to [Father] T.J. and all the others at the church. We will never forget you!”

All were thankful no one was injured that day, Father Dolce said.

Back at the school, most semblance of routine was washed away by the flood, with school pick up delayed by hours due because most streets were still not safe.

By evening, as the waters began to drain, staff remained on campus with students until the very last children were safely picked up by their parents.

In the end, both Shurtleff and Ortiz lost their cars in that day’s flood. Still, Shurtleff said she saw the storm as another opportunity to “see Jesus’s hands and feet in action.”

“We have countless stories about how our faculty and staff, parents and students, and other people in our community pulled together and helped each other on [that] difficult day,” she said.

Within days, a disaster recovery team was on site to repair and renovate the damaged school buildings. Plans were quickly in place to offer parents with student activities and classes resumed May 21, following intensive repairs and maintenance. Eighth grade graduation was set for May 23. Most major reconstruction was set to begin after the end of the semester.

The weekend after the storm, the parish took up a second collection to benefit those affected. The parish’s Mother’s Day Out program resumed its normal schedule by May 14, and the parish’s social ministries offered aid to families affected by the floods, using the same framework developed during Harvey.