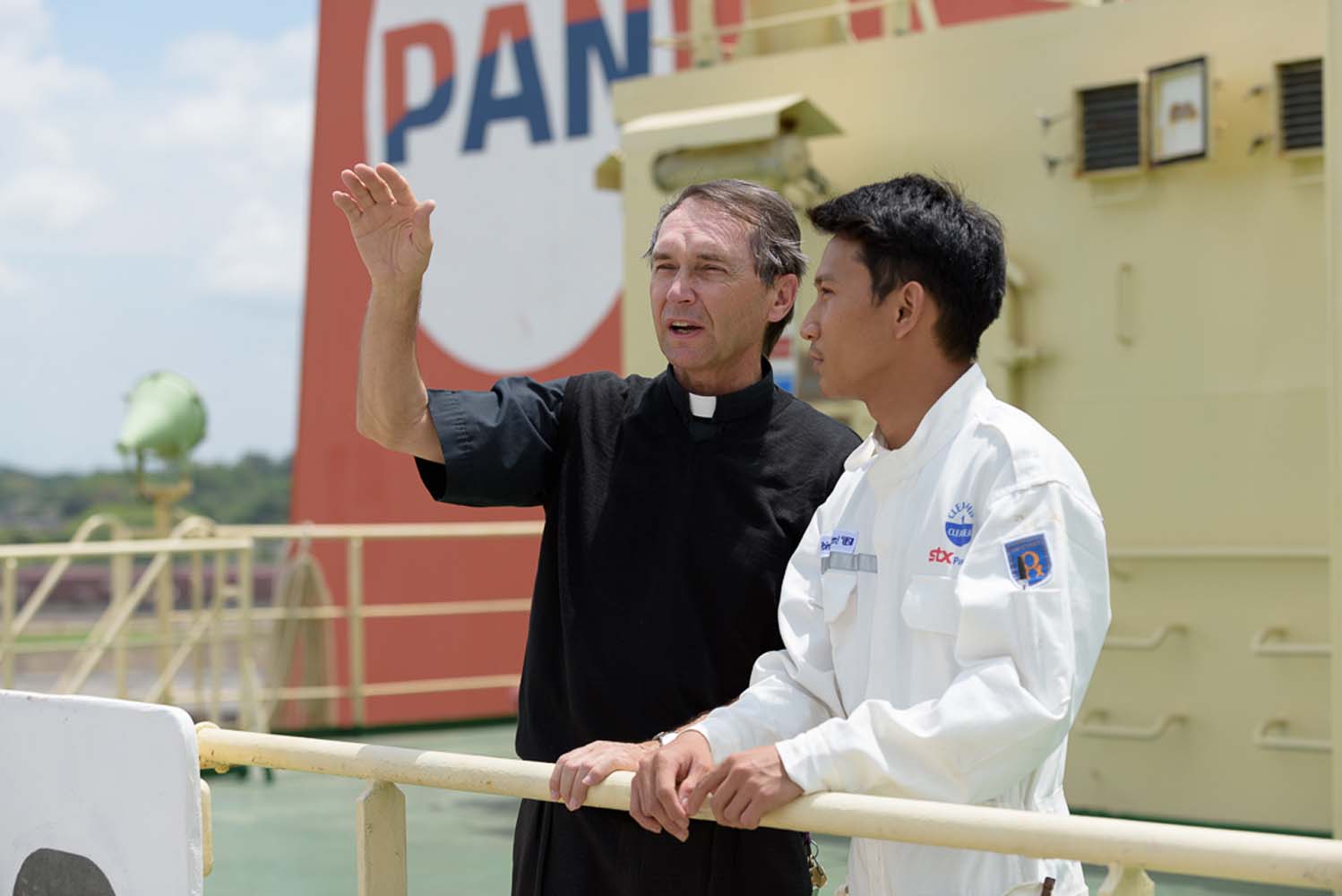 Port Chaplain Father Jan Kubisa ministers to a seafarer aboard a cargo ship in the Port of Houston as part of the Port Ministry and Apostleship of the Sea efforts. The Port Ministry is just one of more than 60 programs supported by the Diocesan Services Fund. Photo by the Development Office.

HOUSTON — Pope Francis urges all Christians to avoid indifference, to become active instruments of God’s mercy. By supporting the 2018 Diocesan Services Fund (DSF), which begins in parishes in the Archdiocese of Galveston-Houston Feb. 3 and 4, the faithful have an opportunity to become instruments of mercy close to home.

The 60 ministries supported annually by the DSF assist thousands living in the Archdiocese, many of whom are poor, sick, imprisoned, elderly or people currently facing a crisis, such as those impacted by the catastrophic flooding during Hurricane Harvey in August of 2017.

According to Daniel Cardinal DiNardo, the Catholic community in the Archdiocese became instruments of mercy for their relatives, neighbors and strangers who needed resources and the hand of compassion in their recovery from the results of Harvey.

Additional ministries funded by the DSF that serve those in need include the Apostleship of the Sea, Pro-Life Office and Office of Vocations.

The Apostleship of the Sea is the Catholic Church’s worldwide ministry to God’s “People of the Sea,” including seafarers, fishers, their families, dock workers, maritime cadets, security personnel, truck drivers and other workers in the maritime industry. This ministry was formed in the 1880s when the first pastors on Galveston Island ministered to the crews on board the ships that docked in the Port of Galveston.

Currently, the Archdiocese’s Apostleship of the Sea is responsible for the sacramental and pastoral care of the Catholic seafarers from around the world who enter the ports in Galveston, Barbour’s Cut, Texas City and Port of Houston. The day-to-day life for the chaplains, seven-days a week, includes celebrating the Sacraments of the Eucharist and Reconciliation, and providing spiritual guidance, counseling, financial assistance and other forms of compassionate support and care. Approximately 12,000 seafarers that arrive on 500-plus large merchant vessels are visited by the chaplains each month.

According to Port Chaplain Karen Parsons, the DSF provides funds to assist local fishers and shrimpers when they are in dire need due to an unforeseen emergency. She also said it funds the Apostleship of the Sea’s operating expenses and continuing education for the chaplains and personnel since the industry is always changing and they must remain updated on an annual basis.

The Office of Pro-Life’s mission is to protect the most vulnerable among us, recognizing the dignity of each human person.

Jerome’s Hope is a new program that will be offered through the Pro-Life Office in early 2018. According to Julie Fritsch, Office of Pro-Life director, assistance will be provided to families who have received an adverse pre-natal diagnosis during pregnancy. In these cases, many times the physician will inform a family that the best option is to undergo an abortion, even though in many instances, the diagnosis may not be certain.

“We have a team of medical professionals, clergy and mentors who have come together, all of whom have a special piece in working with families who have received a difficult adverse diagnosis, so they can carry their pregnancy to term,” said Fritsch.

Additional volunteers in the Pro-Life Office have a child with a disability or who have lost a child due to a medical condition. They are trained to offer continuous emotional and spiritual support throughout.

Racheal and Paul Emig, parishioners of St. Paul Catholic Church, had a son that was stillborn. Based on their experience, they are proponents of programs like Jerome’s Hope that would be available to other families suffering from the same loss. They said having resources and trained professionals that can give advice and be a source of comfort during this time would be critical to the healing process. Through the support of the DSF, these resources will now be available through Jerome’s Hope.

The Office of Vocations is responsible for encouraging and fostering young people in the Archdiocese who are considering a vocation to the priesthood or consecrated life. Currently in the Archdiocese, 52 men are enrolled in the seminary and approximately 30 men have attended ministry events and are in discernment of entering the seminary. In addition, close to 80 young men and women are studying in communities that will serve in religious orders.

The Office of Vocations relies on the support of the faithful who contribute to the DSF each year and make it possible for the ministry to foster vocations in the Archdiocese.

“It’s an invaluable gift for the life of the Archdiocese” said Deacon Matthew Suniga, who currently attends the seminary in formation to be a priest. “I think there is no greater sign of God’s willingness to let his mercy flow into our lives, than to have a Church that is alive, and none of that is possible without the support of everyone who contributes to the DSF.”

Cardinal DiNardo said he is very grateful to the faithful in the Archdiocese that have always been very generous to DSF, and encourages continued supporting during the 2018 DSF.

“I am proud of all of you, my sisters, brothers and friends, for extending our Savior’s love to others, and now I ask you to become an instrument to DSF,” said Cardinal DiNardo.