Faith must identify with those who suffer, pope says at Mass in Slovakia 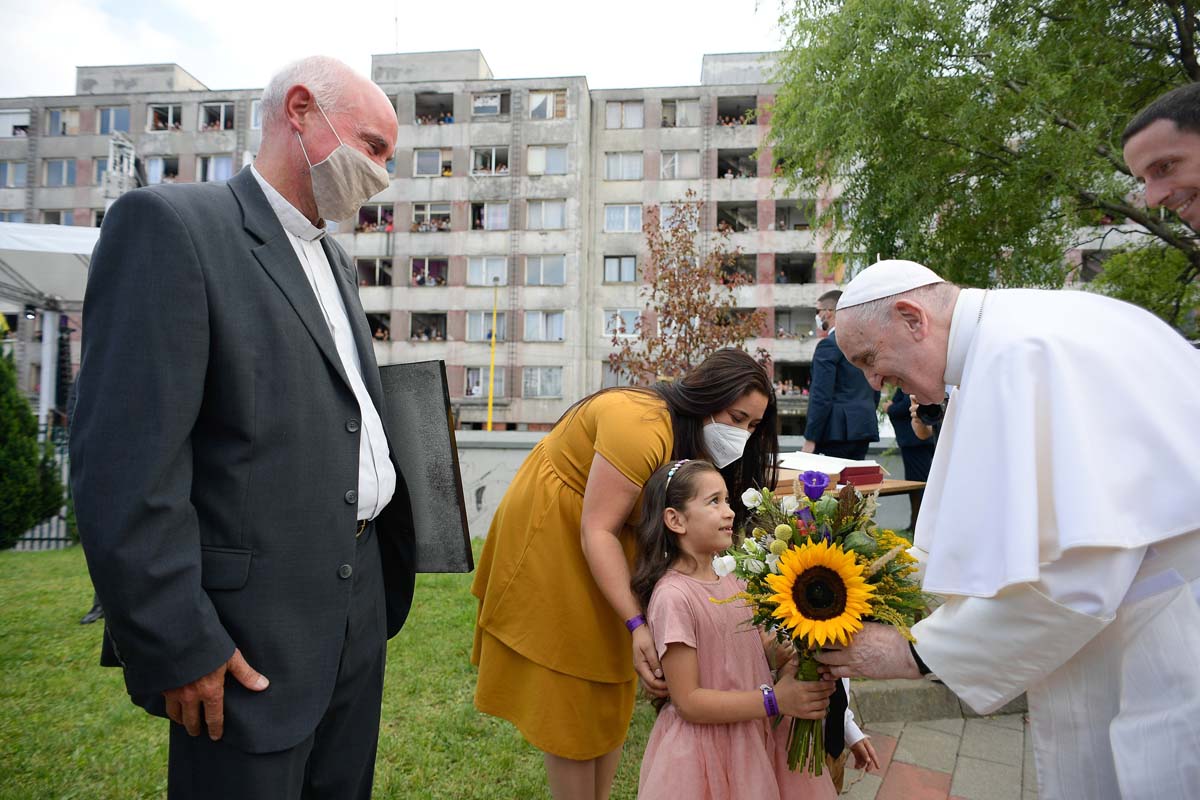 Pope Francis accepts flowers from a girl during a meeting with the Roma community in the Luník IX neighborhood in Košice, Slovakia, Sept. 14, 2021. (CNS photo)

ŠAŠTIN, Slovakia (CNS) — The world needs Christians who are “signs of contradiction,” who show the beauty of the Gospel rather than hostility toward others, Pope Francis said.
Celebrating Mass on the final day of his apostolic trip to Slovakia Sept. 15, the pope said the country needed such prophets who are “models of fraternal life, where society is experiencing tension and hostility,” especially toward those who often feel unwelcome.
Slovakia needs Christians who are “bringers of the sweet fragrance of hospitality and solidarity, where personal and collective selfishness too often prevails, protectors and guardians of life where the culture of death reigns,” he said.
The Marian basilica in Šaštin, which draws thousands of pilgrims each year, features a 16th-century statue of Our Lady of Sorrows venerated by Slovak Catholics. The pope’s visit to the shrine coincided with the feast of Our Lady of Sorrows.
Following in the footsteps of St. John Paul II, who visited the shrine in 1995, Pope Francis visited the basilica privately to pray before the statue of Mary with Slovakia’s bishops, the Vatican said.
Reciting a prayer on behalf of himself and the bishops present, the pope sought Mary’s intercession for them “in the joys and struggles of our ministry.”
“Queen of the Apostles, refuge of sinners, you know our human limitations, our spiritual failings, our sorrow in the face of loneliness and abandonment: with your gentle touch, heal our wounds,” he prayed.
Thousands of Slovaks lined the streets leading to the basilica, pressing against the barricades and waving as Pope Francis drove by in his popemobile.
Arriving at the site of the outdoor Mass near the basilica where an estimated 60,000 faithful welcomed him, the pope waved back and often stopped to greet children presented to him, gently patting them on their head or caressing their faces. †