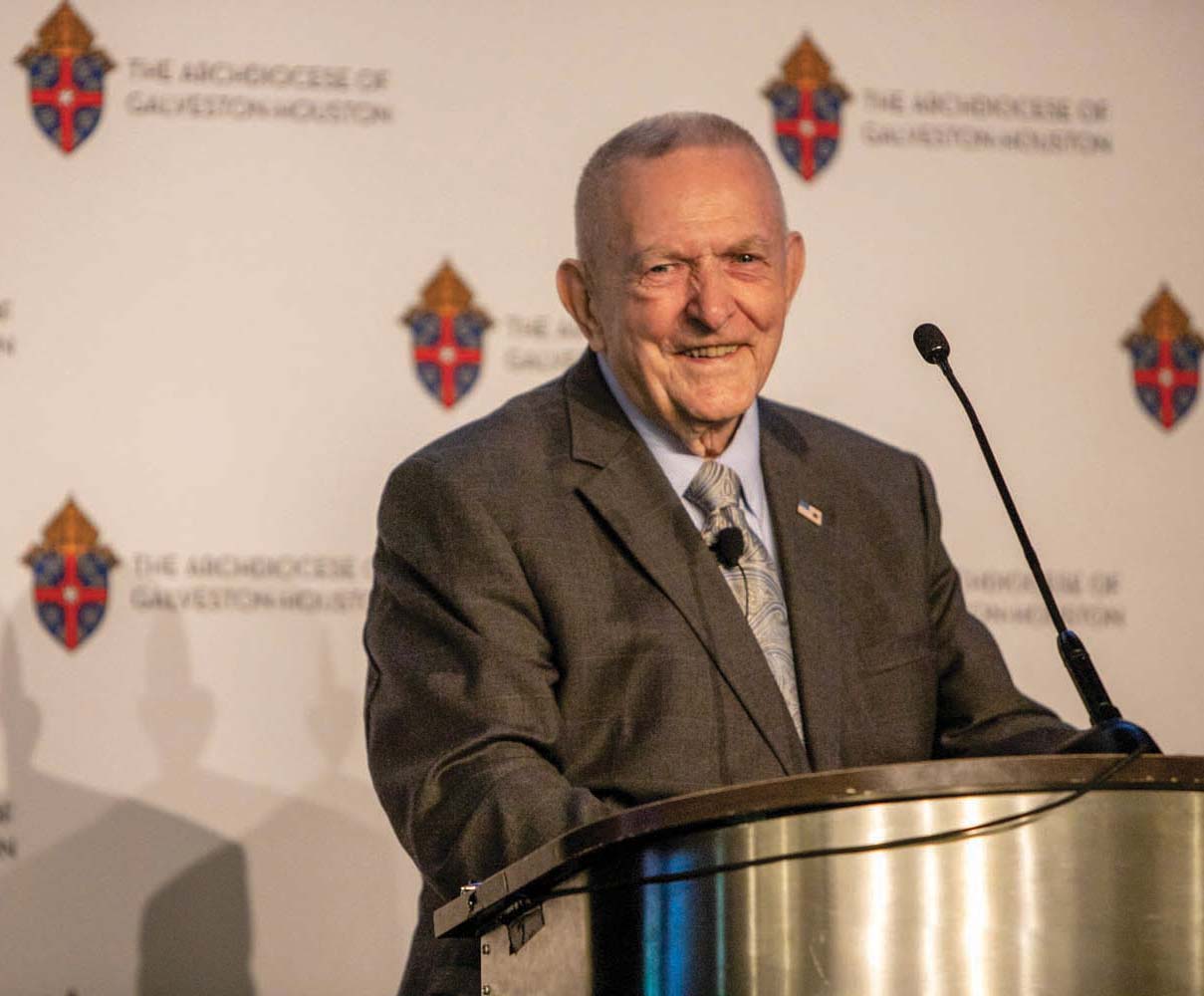 HOUSTON — Gene Kranz, NASA flight director during the 1969 landing of the first man on the moon, spoke about faith and family to more than 1,000 attending the Archdiocesan Prayer Breakfast held July 30.

In attendance were four of his daughters, among his six children, who praised all that Kranz has done to commemorate his fellow space pioneers and the historic event. His long list of public appearances included being acknowledged by President Donald Trump during the 4th of July celebrations in Washington, D.C.

An aerospace engineer and former U.S. fighter pilot in Korea, Kranz retired from NASA in 1994 after 37 years of federal service working on Mercury, Apollo and Shuttle space missions. He told the crowd at the Marriott Marquis ballroom, “God’s mark is everywhere and is on everything.”

He recalled growing up in Ohio and being an altar boy at St. Agnes Catholic Church next door to his home. His father, a World War I vet, died when Kranz was only seven. So his mother opened up their house to take in boarders, many of them who were soldiers on leave.

“I remember serving at morning Mass that turned into weddings for the soldiers about to ship off. Our priest, Father John Jamison, was a father figure to many whose fathers were fighting in the war,” he said.

With his interest in the military and flying firmly entrenched, he completed pilot training at Lackland Air Force Base in Texas in 1955. Shortly after receiving his wings, Kranz married Marta Cadena, who sewed his vests made famous during Apollo missions including one exhibited in the Smithsonian Museum.

Looking for work as a test pilot, he was reading a trade journal. “Whenever there is a fork in the road and a major decision, it’s always part of God’s plan,” he said.

“The government was looking into the feasibility of putting Americans in space flight,” Kranz said. He applied for the program.

Kranz shared how he and Marta are now parishioners at Shrine of the True Cross Catholic Church in Dickinson, where he taught CCE in past years and is an active member of the Knights of Columbus. He showed a photo projected on a screen of his tattered copy of “The Shield of Faith: Reflections and Prayers for Wartime” written by then Monsignor Fulton J. Sheen.

“I pulled this prayer book out many a time,” Kranz said. “I’ve been asked if I ever felt stress. No matter, I always felt the presence of God in my work and life.”

During July, Kranz was bombarded with media interviews from coast to coast and celebrations for the 50th anniversary of the lunar landing. One of his daughters, Jeannie Kranz, a public relations professional, helped her father, now 85, keep up with the demand.

That included being part of the 4th of July “Salute to America” at the Lincoln Memorial where President Trump praised the dedication of Kranz in the historic Apollo 11 moon landing among others recognized.

“Gene,” Trump said in news reports covering the event, “I want you to know that we’re going to be back on the moon very soon and someday soon, we will plant the American flag on Mars.”

Jeannie said, “To hear our father recognized by the president among so many great people like a Medal of Honor winner was amazing.”

Kranz returned to Washington, D.C. later in the month to testify in a Senate aviation and space subcommittee hearing chaired by Senator Ted Cruz on the future of NASA’s space exploration.

During testimony, Kranz said this was an exciting time for NASA, which had lost focus since the end of the Space Shuttle program in 2011. “We need to restore the passion, energy and imagination,” Kranz testified.

But he also remembers the heartache over the dangers of space travel. At the Prayer Breakfast, Kranz showed a 1967 photo of three smiling Apollo 1 astronauts Gus Grissom, Ed White and Roger Chafee who were lost in a flash fire that swept through the oxygen-rich command module during a launch rehearsal test.

Both the crew inside and technicians outside the hatch door tried to quickly open it to no avail. “There was no way to save them,” he said.

It took more than 18 months and extensive redesigns, including a new hatch door that opened in seconds, before another mission launched.

Daughter Lucy Kranz, who retired from NASA after focusing on the business side of its contracts, said she was 10 years old when Apollo 11 landed on the moon.

“I remember a TV being rolled into our classroom at Shrine of the True Cross school and everyone was excited. To me, it was just dad’s work. We always thought we’d be right back there on the moon again,” Lucy said.

But at the actual time of the lunar landing anniversary July 20, Kranz and his remaining crew gathered at the lit-up consoles of the remodeled Mission Control to relive that time with only each other, his daughter recalled.

“At that exact time when the Apollo 11 crew landed on the moon (3:17 p.m. Central time), my dad and his remaining team were right there in Mission Control,” commiserating together complete with amber ashtrays and retro coffee cups, she said.

In a previous news report about visiting the remodeled control room, Kranz said, “When I sit down here and I’m in the chair at the console, I hear these words…”Houston, Tranquility Base here. The Eagle has landed.”

He recalled at that time about 100 people, including politicians, were in a viewing room adjacent to Mission Control and they erupted in cheering, stomping, and clapping.

Kranz said, “You could hear the sound coming through the double glass windows there and it’s seeping into the room. And my team has to be as cool as a cucumber” as they checked on the astronauts’ safety and preparation to walk on the moon’s surface.

In thanking Kranz for sharing his historic recollections at the Prayer Breakfast, Daniel Cardinal DiNardo was the one who repeated the memorable words of astronaut Neil Armstrong taking the first step ever of man on the moon, “One small step for a man, one giant leap for mankind.”