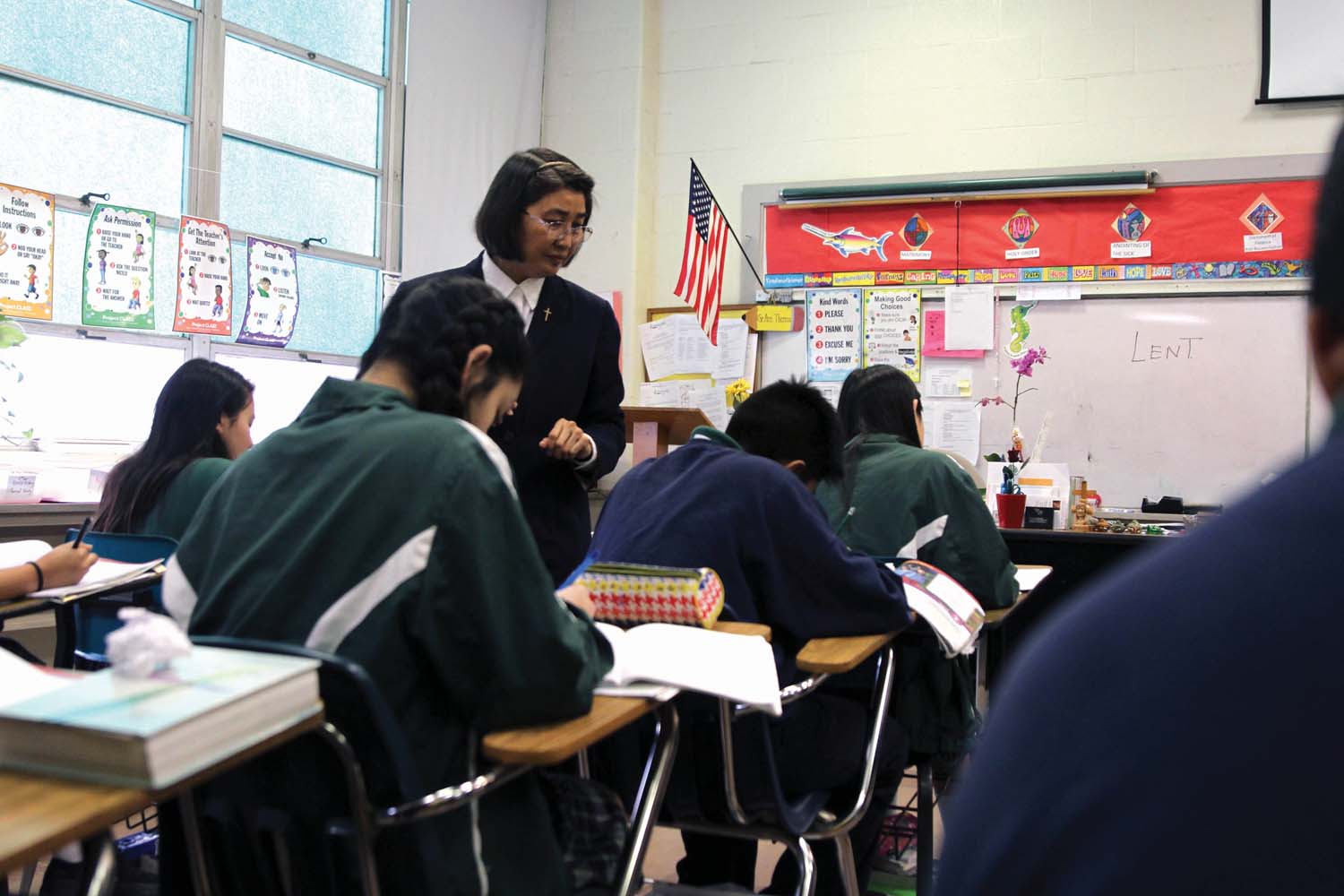 HOUSTON — Off the busy Gulf Freeway sits Queen of Peace Catholic School, one of 13 Inner City Catholic Schools that serve as an oasis of learning and prayer. Then add 46 more schools in suburban neighborhoods and one understands how the Archdiocese makes up the largest private school system in Texas.

Queen of Peace principal Jan Krametbauer said almost all of her students from Pre-K to eighth grade qualify and receive financial assistance. But that doesn’t prevent them from learning how to give to others more in need.

“In one project, all the Inner City Catholic Schools donated snacks and approved supplies to children who were in a youth detention facility. They were boys from 11 to 17 years, who also received encouraging notes from our students. The kids were so grateful,” Krametbauer said.

Although the students were not allowed to visit the southwest Harris County detention facility, the principals delivered the gifts to the boys. They also had a two-hour interaction with the detainees that included opening and closing prayers. In between, they all enjoyed sharing pizza, goodie bags and crafts.

“It was intense and meaningful. We shared the experience with all our students,” she said.

These types of projects are among the reasons that the National Catholic Educational Association (NCEA) sponsors Catholic Schools Week to celebrate the value that Catholic education provides for churches, families and communities.

In the Archdiocese of Galveston-Houston, this means about 19,400 students in its 44 diocesan grade schools, five private elementary schools and 10 private high schools will be celebrating Catholic Schools Week Jan. 28 through Feb. 3. Schools typically observe the week with Masses, open houses and other activities for students, families, parishioners and community members. This year’s theme is “Catholic Schools: Learn. Serve. Lead. Succeed.”

Daniel Cardinal DiNardo said, “The legacy of a Catholic education is more than the knowledge imparted to our students; it is the development of a deep and abiding sense of faith, the realization of the value of moral character and the inspiration of a lifelong journey of learning.”

A free citywide event open to the public, especially families and private schools, called “Stronger Together” is scheduled at Minute Maid Park on Jan. 27, Saturday at 10 a.m. for National School Choice Week. Coinciding with the kickoff weekend of Catholic Schools Week, “Stronger Together” will have free parking at the stadium, appearance by Astros mascot Orbit and games for the students. The Catholic Schools Office plans to have a booth and staff in attendance at the large event sponsored by the nonprofit Families Empowered, said Leslie Barrera, director of media and technology for Catholic Schools Office.

A Cristo Rey College Preparatory student is among the lineup of speakers leading up to the main speaker, Dr. Steve Perry, an educator who has appeared with Oprah Winfrey and other national media.

Debra Haney, M.Ed., Catholic Schools Office interim superintendent, said, “National Catholic Schools Week is an excellent opportunity for our schools to showcase their strengths to the community while supporting their network of Catholic schools at the local, state and national levels.”

Hosting open houses at the schools “also allows families who are in search of an excellent educational opportunity for their child to visit our schools and experience first-hand the vibrant academic and spiritual life of a Catholic school.

“This year, Catholic Schools Week is especially meaningful to us since we have experienced such an outpouring of generosity from our fellow Catholic schools across the country after the storms and flooding following Hurricane Harvey,” she said, referring to a recent check that NCEA gave to the Archdiocese and the numerous donations received from individual schools and dioceses from around the nation for schools damaged in the storm.

“Catholic Schools Week gives our schools a chance to share the enormous gift that a Catholic education is to a family. Our schools pride themselves on the strength of their communities, rigor in academics, attention given to moral development, and time in service to others through the Spiritual and Corporal Works of Mercy,” Haney said.

In other key milestones, Epiphany of the Lord in Katy is currently planning to open its new school in the fall of this year; Christ the Redeemer Catholic School will have its first graduating class (eighth grade) this year; and St. Helen Catholic School in Pearland opened its doors to a new parishioner-funded 75,000-square foot facility to replace the original 25,000 square feet of classes.

Celebrating anniversaries, Holy Family School in Galveston and O’Connell College Preparatory will be commemorating 170 years of Catholic school education on the island. The schools trace their lineage to 1847 when the Ursuline Sisters arrived on Galveston Island and established the first Catholic girls school in Texas.

“The focus on Catholic identity and excellence in education are paramount in the schools of our Archdiocese. We welcome families to check out the Open House schedules for schools in their area so they can come and see what our Catholic schools have to offer them!” Haney said.