Evangelization along the shores of Galveston-Houston reaches 183 years 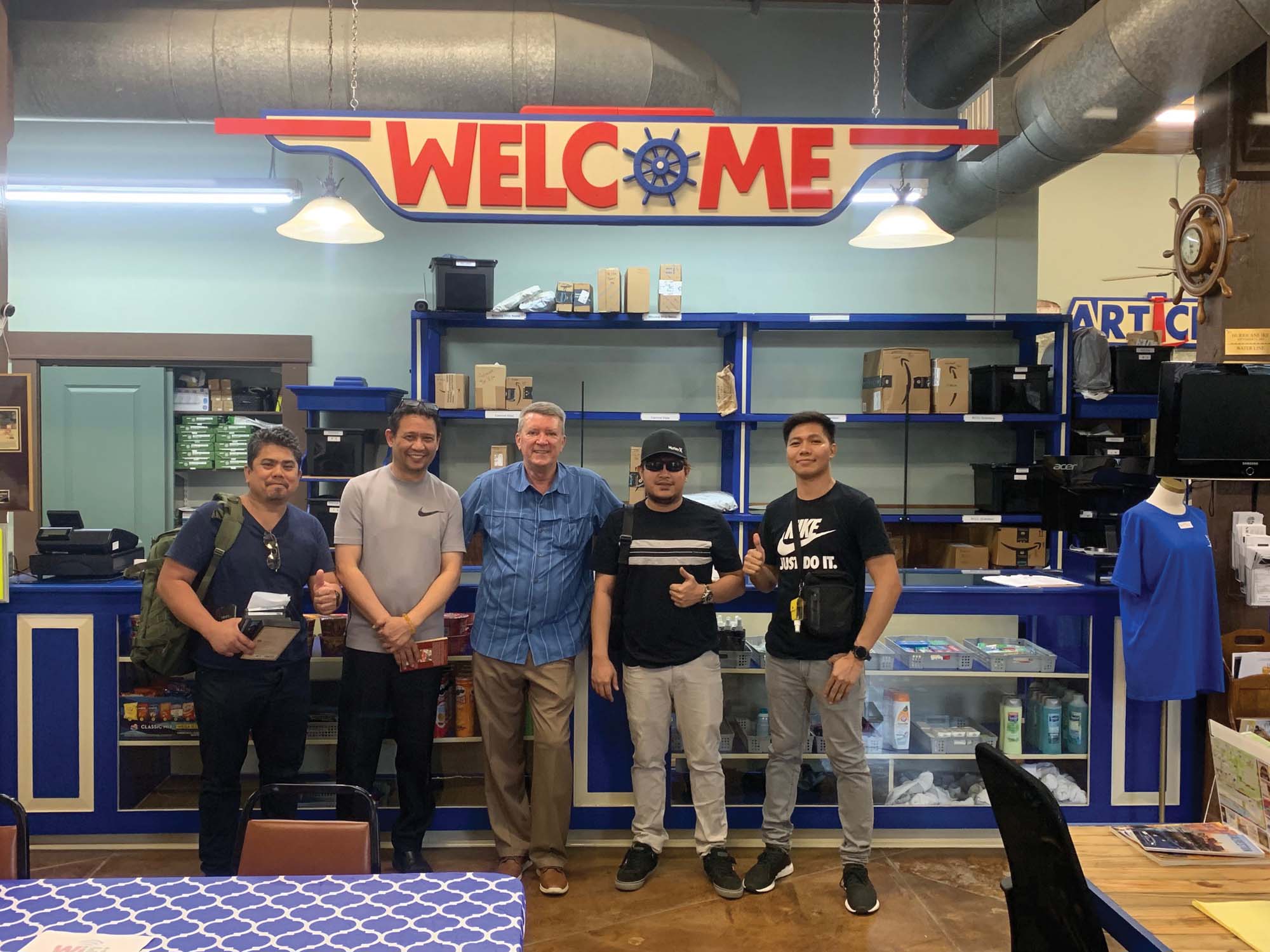 One of the greatest joys of the Stella Maris ministry for Chaplain Jeff Willard (center) was getting to take a captain and three of his officers off the ship, who had not been allowed shore leave since Dec. 2019. (Photo courtesy of Stella Maris)

HOUSTON — Before the Catholic Church’s official ministry to the “People of the Sea” was established worldwide in 1920 by the Vatican, the earliest priests assigned to the crews on ships docked at the Port of Galveston began in 1839. Almost two centuries later, evangelization efforts remain along these shores as hundreds of thousands of seafarers from around the world visit the ports in the Archdiocese each year.

“It is important for us to remember that 90% of the ‘things’ we have, came to us by sea,” said Deacon Jeff Willard, the newly hired chaplain of the Galveston Seafarers Center. “On any given day, there are somewhere around 1.4 million nameless men and women who work to bring us those things. Their work is hard and very dangerous, and it is important that we continue to be present to them, letting them know that someone cares.”

The Galveston Seafarers Center is part of Stella Maris, formerly known as the Apostleship of the Sea, that serves seafarers that dock at the Ports of Galveston, Texas City, Barbour’s Cut and Houston, as well as local fishers and their families working in San Leon, Dickinson, Texas City, Galveston and Bolivar.

Deacon Willard shared an experience he had with a crew member named Adrian from South Africa who was docked at the port. Formerly an attorney, which is not a lucrative profession in South Africa, Adrian recently chose to work on a cruise ship to better provide for his wife and children, which takes him away from his home for months at a time.

When Adrian’s luggage was recently lost, a crew member told him about the Galveston Seafarers Center. Deacon Willard provided him with free clothing, personal care items, a Bible and prayer aids for when Adrian was back at sea.

Adrian said while he appreciated these items, he most treasured the time he spent in prayer with Deacon Willard because he found it very difficult to be a Christian while at sea.

“It was so good to be able to pray and cry with a man of faith,” said Adrian. “This place is here to serve all people, regardless of their faith or lack of faith. It is a vital oasis serving those who are out of touch with community and family.”

Sacramental and pastoral care is provided for the tens of thousands of Catholics that visit the ports each year, including Mass, reconciliation, counseling and spiritual care. Each month, Deacon Willard and five men in formation to be permanent deacons visit an average of 25 cargo or oil tanker ships each month and 70 petrochemical vessels each week. They join over 1,000 chaplains and volunteers in the Stella Maris ministry in 330 ports across 60 countries from Australia to the United States.

“The people served through Stella Maris truly are served for the glory of God,” said Deacon Willard. “For people like Adrian, we become the hands and feet of Christ to serve these men and women that are far away from home and in need of God’s love through acts of kindness and a ministry presence.”

Deacon Willard said access to the crews onboard continues to be difficult post-COVID-19, with many crew members without shore leave passes. This has made visiting the ships more difficult for clergy and volunteers, as well as access to the personal items the seafarers need that are only accessible when they are docked at a port.

Deacon Willard said he often makes online purchases for them and delivers the goods to the ships. He also has encountered several seafarers from Ukraine who don’t have access to their funds because their bank accounts are no longer in operation or frozen due to the war. Stella Maris has become a lifeline for many of these men and women.

Deacon Willard said he is working with the cruise lines that have cruise ships that dock at the Port of Galveston each year to minister to their crews. Because Galveston is an embarkation port, most of the crew are not able to leave the ship.

“I am working with the cruise lines to have a set time where I can come into a small space and visit and pray with the crew for just a moment,” said Deacon Willard. “For those who are Catholic, I am trying to get them the Sacraments.”

One of the 64 ministries supported by the Diocesan Services Fund (DSF), Deacon Willard said the position of the chaplain and many of the free items provided to the seafarers are covered fully by DSF. With additional funding, he would find new and better ways to serve them.

“I often hear people state that these seafarers make better money than they could back home, and although this may be true, I recently read about a man who went to work at sea from Cambodia whose motivation was $150 per month,” said Deacon Willard. “While I can’t get this man a raise, through the help of the DSF, I can bring him dignity as a human being. The men and women I meet become family to me and giving to the DSF allows me to be Christ to them.”

Deacon Willard also recently upgraded his cell phone to share a “hotspot” with the crews while they are on the ship to have internet access. He said the valuable tool helped crew members feel connected.

“WIFI at sea is expensive, often slow, and unreliable,” said Deacon Willard. “Having this ability on my phone gives them a chance to FaceTime with family while docked. Moving forward, I see the need for additional DSF funding to purchase more devices to help keep them connected and feeling less isolated.”

To learn more about Stella Maris, visit www.archgh.org/stellamaris. For information about the DSF and ministries supported by the fund, go to archgh.org/dsf. The DSF supports 64 ministries which require this critical funding to remain in operation. Out of each gift given to DSF, 100% of every dollar goes directly to supporting these ministries.