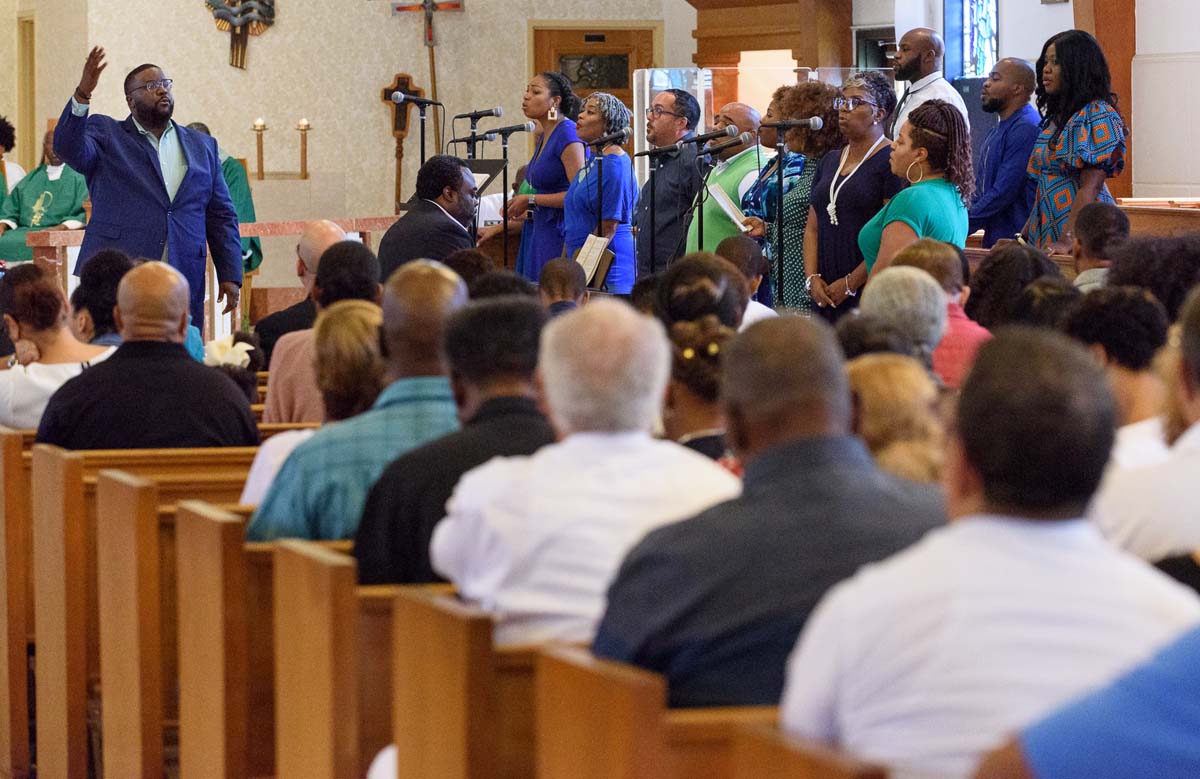 A Gospel choir sings during Mass at Our Mother of Mercy Catholic Church in Houston. One of 60 ministries supported by the annual Diocesan Services Fund (DSF), the Ethnic Ministries provides sacramental and pastoral care of the people of specific ethnic groups found within the Archdiocese. Photo by Scott Kohn.

HOUSTON — The universality of the Catholic Church is evident in the Archdiocese by the hundreds of thousands of Catholics from various ethnic groups across the globe that call the Houston-area home.

One of 60 ministries supported by the annual Diocesan Services Fund (DSF), the Ethnic Ministries provides sacramental and pastoral care of the people of specific ethnic groups found within the Archdiocese.

According to Father Reginald Samuels, the new vicar of the Catholics of African Descent Ministry, approximately 8,500 families of African, African American, and Caribbean Catholic descent are served in the Archdiocese. Sixteen parishes in the Archdiocese have a predominate membership of Catholics of African Descent. Father Samuels said this gives them the opportunity to celebrate their culture’s unique traditions and customs, which is especially important for the younger generation to experience.

“Our mission is to share the Gospel and promote evangelization throughout the Archdiocese with a special emphasis in the Catholic community of African descent,” said Father Samuels.

Father Samuels said this mission has been made possible through the efforts of many committed volunteers serving in various capacities within the ministry at the parish and Archdiocesan level. One such volunteer is Evelyn Wagner Wright, a parishioner at St. Francis of Assisi that has served with the ministry since 1984. Through her years of dedicated effort and extensive leadership roles, she has helped connect the Catholics of African Descent as one family of faith.

“Those who have served with Evelyn over the past 30 years have told me that she has helped others grow in their faith and has been a wealth of information to the people of African descent that worship in parishes across the Archdiocese,” said Father Samuels. “Evelyn has encouraged participation in the many wonderful spiritual events, conferences, workshops, learning events and social activities offered by the ministry, which, in turn, helps to make the Archdiocese of Galveston-Houston a vibrant, diligent and caring community of worshipping Catholics true to the faith.”

When asked about what she has received from serving in this ministry for over three decades, Wright said, “Freely you have received, freely give. I feel I have received many intangible lifelong benefits and am inspired to give more.”

Father Samuels said also of great importance to fulfilling the mission is to provide opportunities that will cultivate and sustain the life of the Gospel in ways most suited to their cultures and traditions.

One such opportunity is the Unity Explosion Conference, which encourages and builds leadership and vocations for this community.

With a vision to liturgically recognize, embrace and share the gifts that the American Catholics of African descent bring to the universal Church, Father Samuels believes this conference is on the forefront of evangelization.

“Held every two years, the next conference will be in the Diocese of Beaumont July 15 to 19, 2020,” said Father Samuels. “Unity Explosion provides an experience that addresses the expressed ministerial, pastoral, evangelization and liturgical needs of the Catholic participants of African descent.”

Father Samuels encourages the faithful in the Archdiocese to consider contributing to the fund.

“Supporting the DSF creates awareness among the different Archdiocesan parish’s schools, communities, councils, commissions and offices about the importance of recognizing, appreciating and respecting the different cultures, traditions and expressions, as well as levels of faith, including the people of African descent in our Archdiocese,” said Father Samuels.

The DSF coordinator at St. Monica’s Catholic Church, Doris M. Barrow III, also is a campus minister at the Texas Southern University Catholic Newman Center and volunteer with the ministry to Catholics of African Descent. He believes the ministry continues to be a source of tremendous blessing and affords him the opportunity to share his time, talent and treasure within the apostolate. He also believes the DSF is critical to all ministries that are supported by the fund.

“As mentioned in the 2019 Diocesan Services Fund video and related to the theme, ‘Do Not Neglect to Share What You Have,’ Hebrews 13:16, it is necessary and essential that we each make a firm, prayerful and generous commitment to the formation, evangelization and accompaniment of our youth, young adults and senior Catholics within the apostolate,” Barrow said.

“Thank you to all who make contributions to DSF every year, those who are contributing for the first time, and those who are prayerfully discerning their participation this year. I encourage those discerning to watch the DSF video online and attentively listen to the appeal of our Archbishop, Daniel Cardinal DiNardo and the former vicar for Catholics of African Descent, Deacon Leonard P. Lockett,” Barrow added.

To learn more about how to give to the DSF and view the 2019 video featuring several ministries that benefit from the fund, including the Ministry to Catholics of African Descent, go to www.archgh.org/dsf.