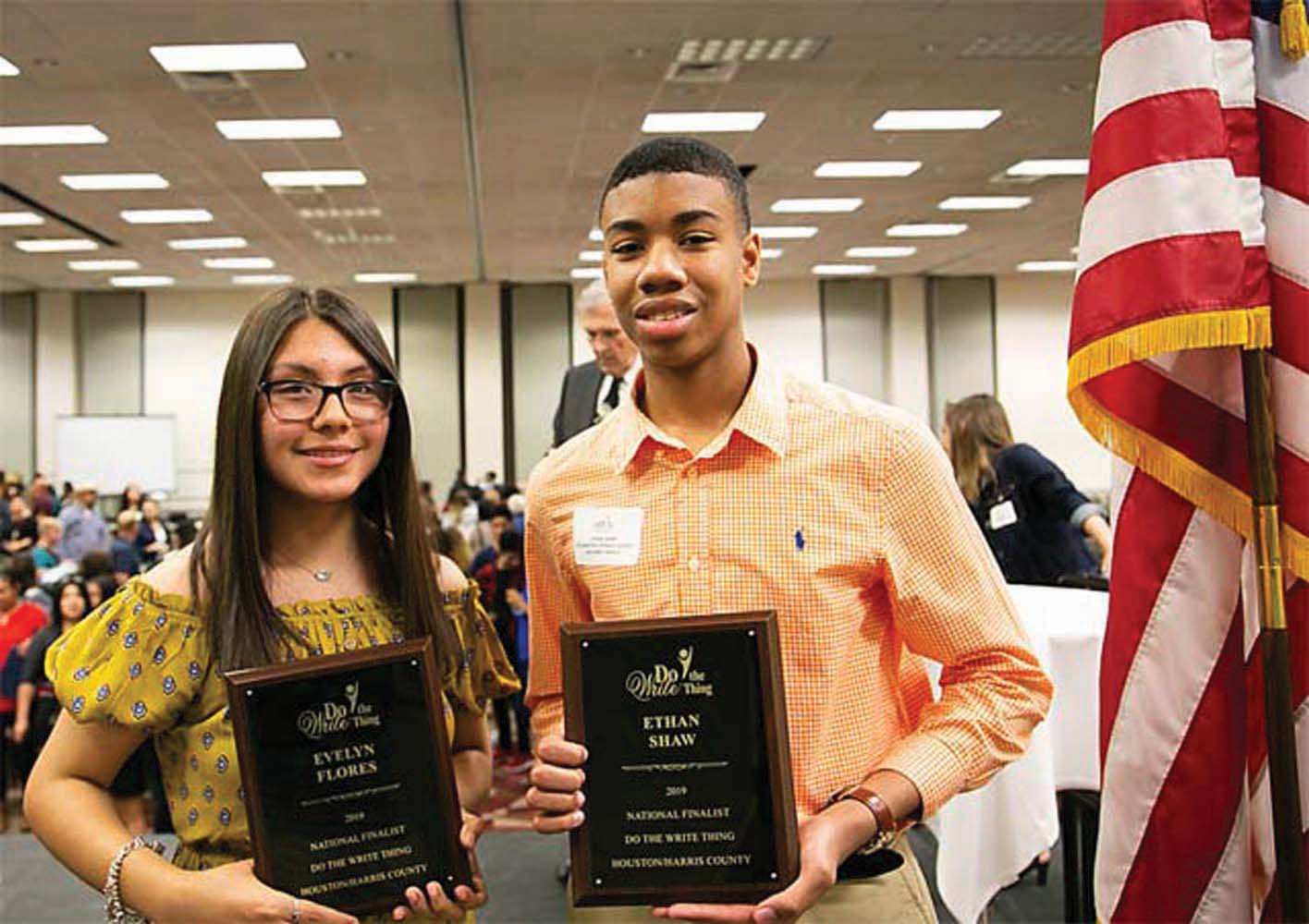 Ethan Shaw, at right and the 2019 eighth-grade valedictorian of St. Martha Catholic School in Kingwood, visited the U.S. Capitol during a trip to Washington D.C. in July. Shaw won the trip after being named a Texas national finalist in the 2019 Do The Write Thing Texas Challenge, a national essay contest. (Photo courtesy of Ethan Shaw)

KINGWOOD — A firm commitment to make the world a more peaceful place motivated Ethan Shaw to write his winning essay entry in the 2019 Do The Write Thing Texas Challenge.

The challenge is part of a nationwide essay contest that draws tens of thousands of entries from across the U.S.
Alongside his fellow junior high classmates, Shaw, the 2019 valedictorian of the eighth-grade class at St. Martha Catholic School in Kingwood, was charged with grappling with violence in their communities through class discussions about identifying and understanding violence, as well as essay writing.

Shaw said he wrote about his personal encounters with violence because he felt if he voiced his own opinion on youth violence, then he could be the “extra push” towards a more peaceful world.

“I have a responsibility to speak on behalf of all the other people who can’t speak up themselves,” Shaw said. Because of his entry, Shaw was named a 2019 national finalist and ambassador, earning him a trip to Washington, D.C. in July.

He was one of two finalists from Harris County, besting some 12,000 other essays in the competition.

“The only thing we can do is control our actions and the way we respond when life throws tough situations at us,” Shaw wrote in his winning essay.

St. Martha Principal Tamara Shurtleff accompanied Shaw and his mother on their trip to D.C. There, he gathered with 46 other national finalists, their teachers and families throughout a five-day series of events and recognition ceremonies.

Shurtleff said the students joined Shaw at an event at the Kuwait Embassy, who sponsored the events, and they were able to tour the U.S. Supreme Court and Capitol Hill. Shaw was also able to meet with U.S. Senator Ted Cruz of Texas. That evening concluded with a ceremony at the Ronald Reagan Building and International Trade Center where Shaw and the other finalists met the Harlem Globetrotters.

During the gatherings, Shaw and other finalists gave a leather-bound book to the Library of Congress containing 50 essays from across the U.S.

Shaw said the trip was “probably the most memorable experience” of his life.

Shurtleff said the event was “extremely inspirational” and a “great effort” in giving children, most of whom have seen violence first-hand, “wonderful tools and ambition to truly make a difference in our world.”

The gathering also encouraged the students like Shaw to “live as Christ asks, with love for their (brothers and sisters).”
Students at St. Martha have entered the challenge for nearly a decade, according to Shurtleff.

At St. Martha, Shurtleff said junior high students have a guided discussion on violence to understand what it is and how to identify it.

They also discuss solutions, she said.

“We refer to Scripture, remembering what Jesus has asked of us: to love one another,” Shurtleff said. The students also reflect on Martin Luther King Jr.’s famous message against violence: “Darkness cannot drive out darkness; only light can do that. Hatred cannot drive out hatred; only love can do that.”

Students from several Catholic schools in the Archdiocese participated in the challenge, including Assumption, Corpus Christi, Our Lady of Fatima in Galena Park, St. Edward, St. Helen, St. Martha, St. Vincent De Paul and the Regis School of the Sacred Heart.

Shaw, now a freshman at Kingwood Park High School, called other students to voice their views on youth violence.
“It will take our collective voices to help put an end to violence,” he said. “Violence is getting out of control, and this program is one way that we can contribute to a more peaceful world.”

Shaw also said he looks forward to returning to D.C.

“This was my first trip to D.C., and after this trip almost nothing could prevent me from going back someday,” he said. “Who knew such a horrible experience could be turned into one of the best trips of my life?”