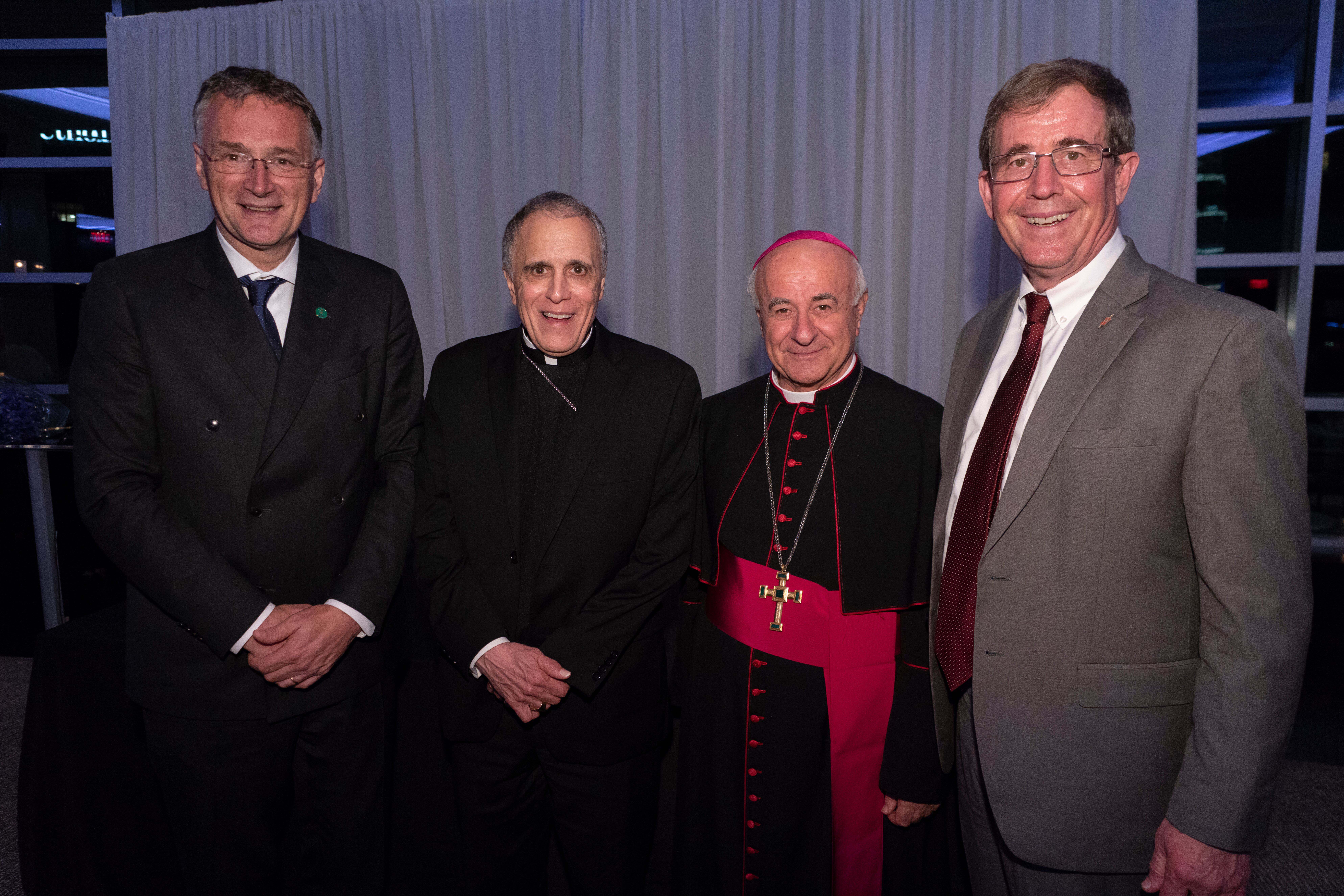 Mauro Ferrari, president of the Houston Methodist Research Institute, Daniel Cardinal DiNardo, Archbishop Vincenzo Paglia of the Vatican’s Pontifical Academy for Life, and Methodist Bishop Scott Jones with the Texas Conference of the United Methodist Church worked together on a joint declaration that supports easing of suffering and pain at the end of life, but limits medical technology and rejects euthanasia. Dr. Ferrari described it as a “very powerful document for our brothers and sisters in their time of need and their families.” They also brought in medical and palliative care experts from across the world for a Sept. 17 conference at the research institute. Photo courtesy of Houston Methodist.

HOUSTON — A nun suffering from metastatic breast cancer in the final stages received medication to ease severe pain and thanked the doctors and nurses.

“Now that the pain is tolerable, I can start praying again,” the sister said, according to Dr. Constantino Benedetti, MD, of Ohio State University, speaking on effective control of physical pain Sept. 17 at the Palliative Care and Spirituality for Life conference.

The event, held at the Houston Methodist Research Institute, was a joint project of the Vatican’s Pontifical Academy for Life, Houston Methodist, and the University of Texas MD Anderson Cancer Center with participation by the Archdiocese of Galveston-Houston.

Dr. Eduardo Bruera, MD, medical director of the Supportive Care Center at MD Anderson, said, “Where is your mother going to die? Where and how are you going to die?”

These are the questions that need to be asked and answered by families so they can help the medical staff treat the whole person, not just the disease, he said. They are important to discuss before any illness or accident since hospitals are the locations of death for 65 percent of people.

Medical specialties and technologies, while allowing people to live longer, also create a narrow focus by physicians and nurses of not seeing the whole person. In addition to treating the disease, alleviating pain and suffering, there can also be treatments for depression and anxiety that come with terminal illnesses. And an important factor is the spirituality and faith of the person and family that must be taken into account by hospital staff, the conference speakers, including chaplains, emphasized.

Dr. Tracy Balboni, MD, MPH, of Harvard University and Dana-Farber/Brigham and Women’s Cancer Center, shared, “One patient with metastatic breast cancer said when she walks into the hospital, she feels herself diminished. The medical staff looks at her as if ‘All I am is a body full of tumors that are killing me.’”

Dr. Robert Fine, MD, with Baylor Scott and White Health, discussed workings of the human spirit in palliative care, which can improve the quality of life of patients and their families faced with life-threatening illnesses.

Fine pointed out U.S. reports which show that 75 percent of people in the U.S. believe in a personal God and it equally shows that 75 percent of physicians also believe in God, but compartmentalize outside of their profession. But not all do, as Fine quoted poet and cardiologist John Stone, MD, of Emory University School of Medicine, who wrote “Gaudeamus Igitur” (“Therefore Let Us Rejoice”) that in part reads, “For Death will give the final examination and everyone will pass…whatever Kingdom will come.”

So such compartmentalization and focus on treating the disease and not the person may be some of the reasons why palliative care rather than hospice has not been incorporated into many hospitals, although it shows monetary savings for hospitals and families, speakers said.

Plus vying for grant and budget dollars with competing medical departments depends on research data, but measuring less pain, depression and anxiety may be intangible.

“You can have the pain chart from one to 10, which I don’t really like to use anyway. But how do you measure deep despair? We need to give voice to suffering, where many of our patients are screaming out in silence,” said Dr. Christina Puchalski, MD, of The George Washington University Institute for Spirituality and Health.

A historic joint agreement was achieved during this meeting from Sept. 16 to 18 between the Pontifical Academy for Life, which focuses on questions of medical ethics and dignity for life, and the Texas Conference of the United Methodist Church. Signed by Archbishop Vincenzo Paglia of the Vatican’s Pontifical Academy for Life, and Methodist Bishop Scott Jones with Daniel Cardinal DiNardo participating, the agreement supports easing of suffering and pain at the end of life, but limits medical technology and rejects euthanasia.

Mauro Ferrari, president of the Houston Methodist Research Institute and a member of the Pontifical Academy for Life chosen by Pope Francis, described the agreement as a “very powerful document for our brothers and sisters in their time of need and their families.”

He knows from personal experience because his wife and mother of their children, Marialuisa Ferrari, died at 32 of cancer and in pain. He keeps her memory alive with the annual Marialuisa Lectureship for Life, presented this year to Archbishop Vincenzo Paglia, and the Pontifical Academy for Life in honor of Pope Francis.