Embracing the Year of St. Joseph 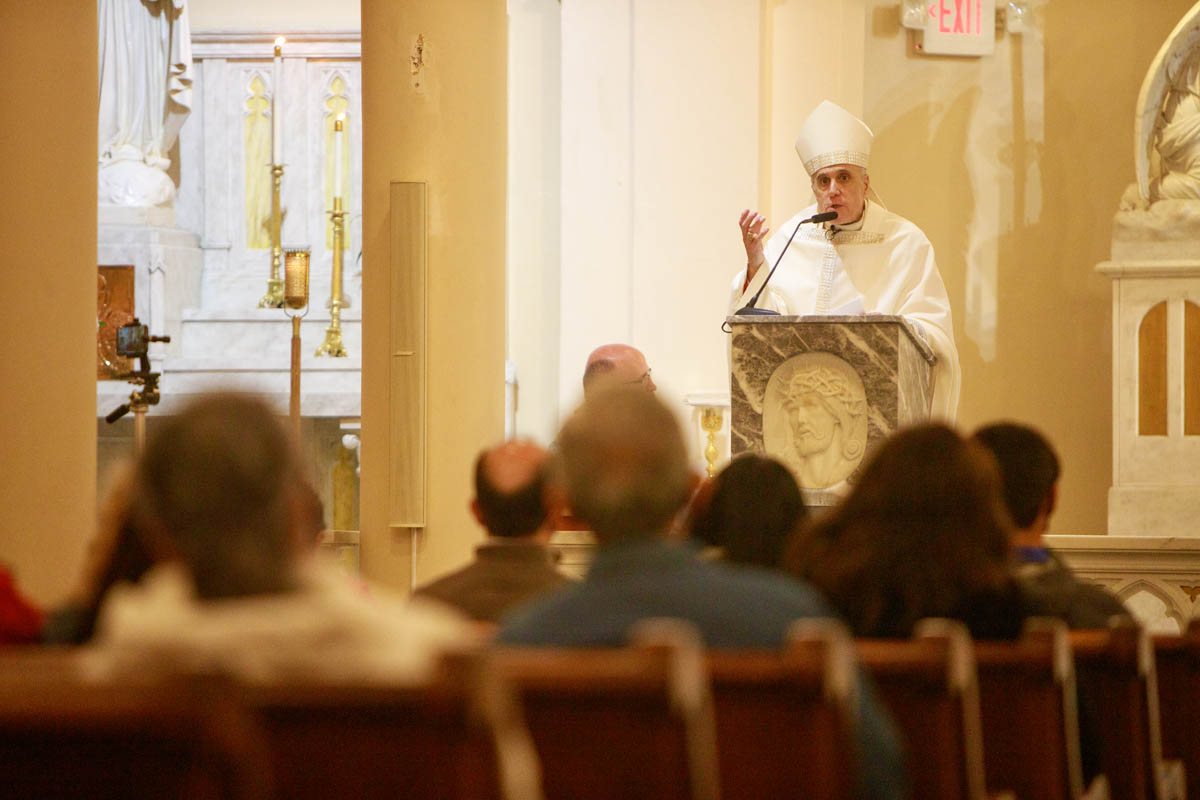 A statue of St. Joseph is seen on a side altar at St. Joseph Catholic Church in Houston on Feb. 10. The parish, one of the oldest in the Archdiocese, is an appointed pilgrimage site for the Archdiocese, offering faithful a plenary indulgence for a pilgrimage made to the parish near downtown Houston. (Photo by James Ramos/Herald)

HOUSTON - Ahead of the March 19 Solemnity of St. Joseph, husband of the Blessed Virgin Mary, Daniel Cardinal DiNardo celebrated a jubilee Mass at St. Joseph Catholic Church in Houston on Feb. 10.

The special Mass marked the 150th anniversary of the saint’s naming as the Universal Church’s patron by Pope Pius IX in 1870 and also celebrated the Year of St. Joseph, which began on the Feast of the Immaculate Conception, Dec. 8, 2020, as decreed by Pope Francis.

Though the pandemic put a pause on the usual St. Joseph celebrations, such as the iconic St. Joseph’s Altar and processions held at parishes around the Archdiocese, the faithful can still join in the spiritual celebrations even while at home.

“St. Joseph is very much a man of faith,” Cardinal DiNardo said in his homily. “We look to St. Joseph as a heavenly patron for guardianship or protection. Many of you who are men, you see yourselves as guardians and protectors of your wives and families, just like Joseph. [He] was always mindful of them first. That’s ... why we should dedicate the church of St. Joseph, which we do. He is the universal protector and guardian.”

A prayer for all

That evening, the faithful gathered to pray in a special way for the entire Archdiocese, Cardinal DiNardo said.

“We are in a difficult time in the United States, and the world is with COVID-19,” he said. “Let’s pray that St. Joseph, protector of the Universal Church, will be with us every step of the way.”

St. Joseph joins the Virgin Mary in accompanying the Church, he said.

“Joseph always intercedes for us by looking to guard and protect.”

Though the Blessed Mother often is the first the faithful turn to, Cardinal DiNardo said the Church has put more emphasis on St. Joseph.

“He’s a great trustee. He takes Mary into his home and heart. The same with Jesus. He does a good job. Let’s call Joseph ... he’s a professional father and husband. He knows what it is to do that. He does it very well,” he said. “ The reason you know he does it very well is, there’s no scandal about him, is there? There’s nothing about him, nothing at all. It’s just that he’s very straightforward. He does his work and he leaves the scene.”

St. Joseph was a first witness

Cardinal DiNardo noted a “kind of magic” in St. Joseph.

“Even at the time of the Magi, Joseph’s the one who will see the Magi pagans give gifts to his son, his foster son, Jesus,” Cardinal DiNardo said. “He’s the first to realize that ... what St. Paul later said, “What gives us access to God? Faith.” Who was the first to see faith really operating in action? Joseph. He watched all these figures come through his foster son’s life.”

Catholics can embrace St. Joseph in prayer and receive a plenary indulgence.

The plenary indulgence is granted under the usual conditions (sacramental Confession, Eucharistic Communion and praying for the pope’s intentions) to the faithful who, with a spirit detached from any sin, participate in the Year of Saint Joseph on the occasions and in the manner indicated by the Apostolic Penitentiary.

These include: meditating for at least 30 minutes on the Our Father; participating in a spiritual retreat of at least one day that includes a meditation on St. Joseph; performing a corporal or spiritual work of mercy; praying the Rosary in families and between the husband and wife; entrusting their work daily to the protection of St. Joseph and to all believers who invoke with their prayers the intercession of the worker of Nazareth; praying the Litany of Saint Joseph, or some other prayer to St. Joseph, typical of the other liturgical traditions, for the persecuted Church and for the relief of all persecuted Christians. Others include praying any approved prayer or act of piety in honor of St. Joseph, for example, “To you oh blessed Joseph,” especially on March 19, the Solemnity of St. Joseph; May 1, the Feast of St. Joseph the Worker; Dec. 26 on the Feast of the Holy Family; the 19th of every month; and every Wednesday, the day dedicated to the memory of St. Joseph.

The gift of plenary indulgence extends particularly to the elderly, sick and dying, and those who cannot leave their homes.

These people, with the spirit detached from any sin and with the intention of fulfilling, as soon as possible, the three usual conditions, in their own home or wherever the impediment holds them, pray an act of piety in honor of St. Joseph, consolation of the sick and patron of good death, confidently offering God the pains and difficulties of his life.