Elastic House stretches to save many during war 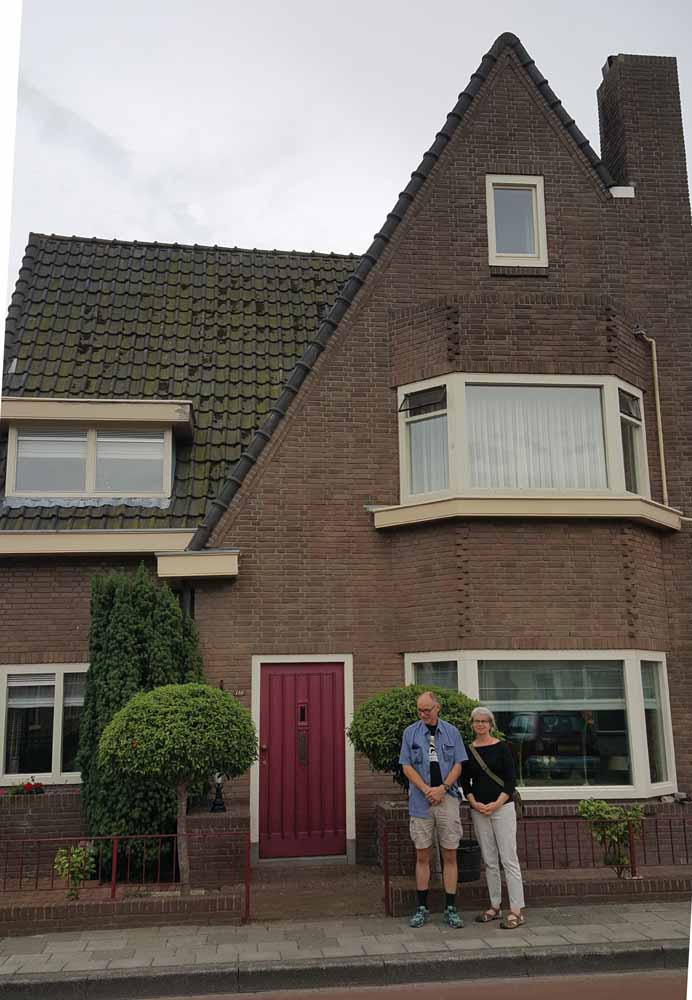 Houston parishioner Christine Wiegman Green, member of Our Lady of Mount Carmel Church, traveled recently to The Netherlands to join her family in receiving an award from the State of Israel on behalf of her Catholic grandparents who saved a Jewish family from Nazi capture during World War II.

Christine’s grandfather, Jan Elders, and grandmother Johanna, along with their eight children, including Christine’s mother Wilhelmina, joined with the Resistance Movement to hide a German Jewish judge Georg Frohlich and his wife, Edith, and daughter, Sabine during 1944 until liberation in spring of 1945.

After researching, interviewing and confirming such acts of bravery, the Jewish state honored Jan Elders, who was mayor or “burgmeester” of Bovenkarspel in North Holland, and his wife, Johanna posthumously this past June in a Yad Vashem ceremony. Yad Vashem means “enduring memorial” in Hebrew and is Israel’s official memorial to victims of the Holocaust and those who fought against the Nazi oppression.

The Elders’ grandson, Leo Wiegman, said “We have received the letter from Yad Vashem, which begins, ‘We are pleased to announce that the Commission of Designation of the Righteous has decided to award the title of Righteous Among the Nations to your late parents/grandparents, Jan and Johanna Josepha Elders (Borst), for help rendered to Jewish persons during the period of the Holocaust at the risk of their lives.’”

The Elders descendants, including sons Father Leo Elders, SVD (retired), Willem Elders and Fons Elders, along with many grandchildren and great-grandchildren including Christine and her older brother Leo Wiegman of New York, were among those honored by the Israeli ambassador to The Netherlands. Three children of Sabine Frohlich-Stwchipper’s children were also present to share their gratitude for the selfless service of Jan and Johanna and all the Elders children.

Christine’s mother Wilhelmina, known to family as Willy, and Georg Frohlich known in the family as Oom Gerard Fassen to hide his Jewish identity, kept a diary of this extraordinary time. Christine said, “They called their home ‘Huize Elastiek,’ which is Elastic House in Dutch because it grew to hold not only the 10 in the Elders family, but up to 18 people, including children sent there during the “Hunger Winter.”

The Hunger Winter referred to the last winter of the war in which extreme cold temperatures were the norm and food was scarce, especially in the cities, so children were sent to live in homes in the country where families had been able to store up small amounts of produce and meat from animals raised in their yards.

An entry in the diary on March 24, 1945 stated, “Two small boys from Amsterdam, sent by Chaplain Drost, appear at the house. They left Amsterdam on foot three weeks ago; they are dirty and full of lice. After a thorough scrubbing and bath... A place becomes available in Nieuwe Niedorp... Fietje and Willy take over the transport of the children. With the heavy freight of both boys and baggage, they bicycle away at 1:30 in the afternoon. We do not count on it that they will be back before 8 p.m.... Because able-bodied Dutch boys were being taken by the Nazis to work in the German factories, Wilhelmina’s older brothers went into hiding and her parents relied on her, at age 16, to deliver food, carry messages, get news and even to transport refugees. At great risk to herself and her family, Wilhelmina retrieved Sabine, the Jewish couple’s daughter from a farmhouse where she was hidden three small towns away, to reunite with her parents at the Elastic House.”

“I left early on a Sunday morning and rode my bike while holding another bike to roll beside me so she could ride it back. We made it safely back, better than the time I broke curfew,” said Wilhelmina, now in her 80s living in New Hampshire.

“Seeing all the hate and murder with people being shot in the street made us want to do something better for the world."

The Nazi occupation had mandated an 8 p.m. curfew for all residents to be in their homes. Wilhelmina and another lady had been out distributing food to the needy 33 miles away in Amsterdam, when they heard the church bells tolling 8.

“We tried to make it home, but a German truck pulled up and threw me in the back and kept me in a cell overnight,” Wilhelmina said.

When asked how she coped with the hardship and stress, she said the family’s faith in God and regularly attending Mass kept them strong through the difficulties of those years, and Wilhelmina believes that those experiences and the desire to bring good into the world led her brother, Leo Elders, to become a priest and her to become a social worker and lifelong volunteer in her parish and community.

“Seeing all the hate and murder with people being shot in the street made us want to do something better for the world,” she said.

Wilhelmina’s daughter, Christine, growing up in the family, visiting The Netherlands as a child hearing the stories and experiencing her parents Christian approach to strangers and those in need also developed strong faith.

The faith in action of my family inspired me throughout my life to be part of the Jesuit Volunteer Corps, Paper Houses Across the Border project, adopting two sons, and choosing social work as my career. To do what I can to share God’s love,” she said.

Christine’s brother, Leo Wiegman, also self-published the diary and photos that the family kept during the ordeal. Excepts are available on the website: etothefourth.com or by searching “Huize Elastiek 1944-1945 dagboek.”