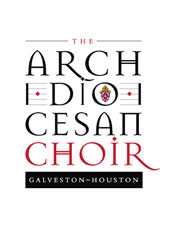 HOUSTON — The Archdiocesan Choir, under the direction of Dr. Rick Lopez, presents the eighth Annual “In Memoria” concert, to be held at 3 p.m. on Sunday, Nov. 20, at the Co-Cathedral of the Sacred Heart, located at 1111 St. Joseph Pkwy. in downtown Houston.

This year, the first half of the program honors the Year of Mercy with the inclusion of several music compositions written in honor of this past year, including two works from local Catholic composers Howard Maple and Percival Cacanindin, winners of the Year of Mercy Hymn Contest. In addition, the Archdiocesan choir will perform the 16th century masterpiece “Miserere Mei Deus” by Gregorio Allegri.

Lopez, who is the associate director of Liturgical music at the Archdiocese, said that, in keeping with the theme of the “Year of Mercy” and its slogan, “Merciful Like the Father,” deciding to share the Renaissance masterpiece “Miserere Mei Deus” was easy.

“This 16th century motet is a setting of Psalm 51. The Latin title ‘Miserere Mei Deus’ and first line of the psalm in English translates to ‘Have mercy upon me, O God,’ he said. “The ‘Miserere: Prayer of Repentance’ as it is also known, is a Lament. It is the most famous of the seven Penitential Psalms. The Psalm prays for the removal of the personal and social disorders that sin has brought.”

The choir will also perform “Prayer for Compassion” written by Maple, who won first place in the Year of Mercy Hymn contest held last March, and “Transform Us, Lord, Into Your Mercy” by second-place winner Cacanindin.

The second half of the program will feature a new work by young Norwegian composer, Ola Gjeilo, entitled “The Sunrise Mass.”

The “Sunrise Mass,” according Lopez, is a hybrid of these two composers from last year. In this Mass the composer combines traditional Mass texts; Kyrie, Gloria, etc. with music themes influenced by Gregorian chant as an example.

In choosing this piece, Lopez said he took a different approach.

“In years past, I have consistently programmed at least one large, multi-movement work for the second half of this concert. Last year, I programmed two settings of the ‘Requiem’ as an example,” he said. “These two settings by Howard Goodall and Maurice Duruflé used very similar texts. However, they were polar opposites in many ways. The Goodall was a modern setting with some traditional Requiem Latin text juxtaposed with English texts from well-known 19th- and 20th-century poets and authors with a 20th-century almost cinematic music style. The Duruflé, on the other hand, is based almost entirely on the Gregorian Chant Requiem Mass from the fifth and sixth Century.”

For more information or to purchase tickets, visit www.archgh.org/InMemoria. Tickets will also be sold at the door: $25 general admission, $15 seniors and $10 for students.