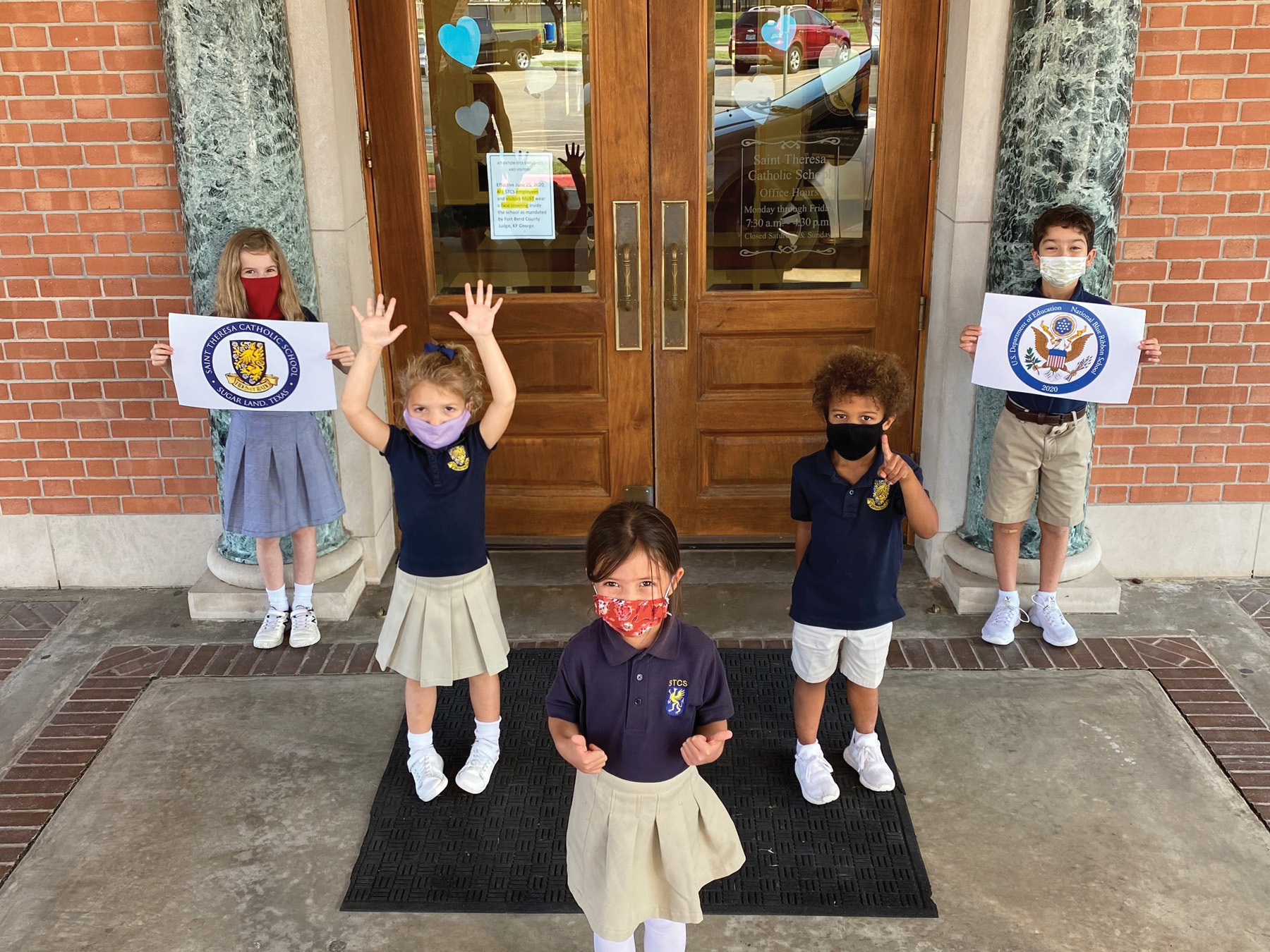 St. Theresa Catholic School in Sugar Land earned both Blue Ribbon status and the distinction of being a Cardinal Newman Honor Roll School in the same year. (Photo courtesy of the Catholic Schools Office)

SUGAR LAND — Students at St. Theresa Catholic School in Sugar Land had two more reasons to cheer when the community made history by being one of only two schools in the Archdiocese to achieve both Blue Ribbon status and the distinction of being a Cardinal Newman Honor Roll School in the same year.

St. John Paul II Catholic School in west Houston is the only other school in the Archdiocese to have achieved the honor.

St. Theresa’s headmaster, Dr. Mark Newcomb, offered gratitude to his staff and school families and credited their support for the community’s achievement.

“Our aim is to be an authentic combination of fidelity to Church teaching and academic excellence,” he said.

Each year, The U.S. Department of Education publishes a list of schools across the country that have achieved the designation of exemplary & high performing. These campuses are called Blue Ribbon Schools.

The Cardinal Newman Catholic Education Honor Roll is a national program that recognizes schools committed to a strong Catholic identity.

As semifinalists, these high school seniors are in the running for 7,600 National Merit Scholarships worth more than $30 million offered next spring.

These students are among a select 16,000 students from across the country. More than 90% are expected to be named finalists, and roughly half will be earn scholarships. Of the 1.5 million teens in 21,000 high schools who took the preliminary SAT exam in 2018 across the U.S., these students are in the 1% of the highest scorers.

To be considered for a Merit Scholarship award, semifinalists must fulfill several requirements to advance to the finalist level of the competition. This includes submitting a detailed scholarship application with information about their academic record, participation in school and community activities, demonstrated leadership capabilities, and honors and awards received. Finalists will be named in February 2021.

HOUSTON — Rice University Physicist José Onuchic has been appointed to the Pontifical Academy of Sciences by Pope Francis.

Onuchic, the first Rice faculty member to be named to the academy, is the Harry C. and Olga K. Wiess Chair of Physics and a professor of physics and astronomy, of chemistry and of biosciences, and co-director of the National Science Foundation-backed Center for Theoretical Biological Physics. Onuchic is expected to contribute to the academy’s biennial plenary sessions and participate in scientific meetings of relevance to his research. Onuchic spoke at the most recent plenary in 2018.

The academy has operated under its present name since 1936 but has its roots in the Academy of the Lynxes, founded in Rome in 1603. According to the Vatican, it was the first exclusively scientific academy in the world, with Galileo Galilei as an early member.

According to the Vatican, the nondenominational academy’s aim “is to promote the progress of the mathematical, physical and natural sciences and the study of [related] epistemological problems.”

A letter to Onuchic noted the academy’s 80 members are chosen on the basis of their original scientific studies and their moral personality, “without any ethnic or religious discrimination.” Members are nominated for life by the pope.

“I grew up in a Catholic family, so anyone with that background is going to be greatly honored by being chosen,” Onuchic said.

“This academy advises the Church on major scientific issues and knowledge and their benefits to society. Topics include, for example, health, climate change, energy, the impacts of poverty and genetic engineering,” he said. “In this regard, the academy serves an important function, considering that almost any comment that comes from the Vatican has an impact on more than just the Catholic community.”

Onuchic joined Rice in 2011 with a grant from the Cancer Prevention and Research Institute of Texas. He integrates biochemical and biological models from the molecular level and above to find new ways to treat disease. Onuchic’s studies incorporate his breakthrough work on protein folding and energy landscapes.