‘Ecumenism starts with prayer’ and life ‘rooted’ in God’s love 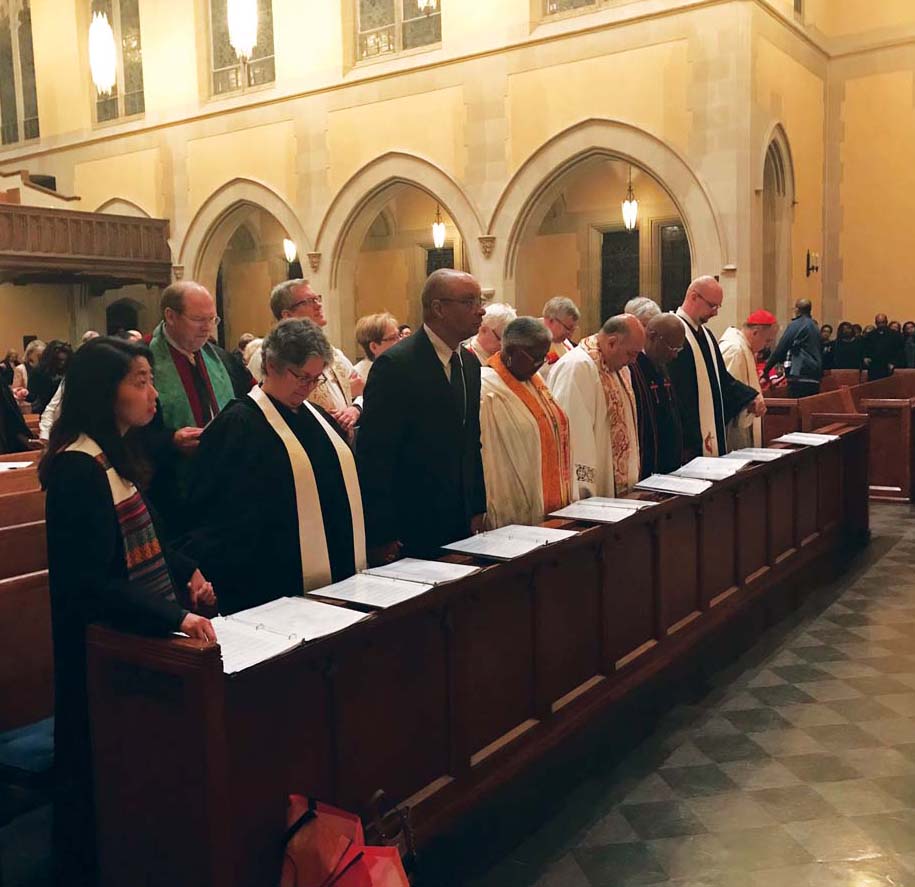 HOUSTON — As Christians continue to understand and long to fulfill the commission that all Christians become one, the fifth annual Ecumenical Prayer Service on Jan. 25 brought several faith communities together during the Week of Prayer for Christian Unity. Hosted at St. Paul’s United Methodist Church in the museum district of Houston, nearly 10 Christian traditions joined together in prayer and song to celebrate being rooted in the love of God.

Father Reginald Samuels, ecumenical officer and commission chair for the Archdiocese and pastor of St. Hyacinth Catholic Church in Deer Park, was one of the prayer leaders for the service.

“Ecumenism starts with prayer,” he said. “Our prayer as Catholics should be the prayer of Jesus’ prayer at the Last Supper ‘that they all may be one,’ (cf. John 17:21). As we begin our work in prayer, this will sustain us in the Christian call in our mission to bring mutual understanding and, ultimately, unity among all Christians.”

In addition to Father Samuels, several prayer and song leaders joined Daniel Cardinal DiNardo and collaborated in orchestrating a service that spoke to the mind as well as the heart. The Ecumenical Commission of the Archdiocese has been a part of the planning and the execution of all of the prayer services over the last five years.

The long list of participants in the service include Coastal Plains Area of the Christian Church (Disciples of Christ) in the Southwest, Houston Mennonite Church, Pleasant Hill Baptist Church, Presbytery of New Covenant, the Texas Annual Conference of the United Methodist Church, the Texas-Louisiana Gulf Coast Synod of the Evangelical Lutheran Church in America, the Archdiocese of Galveston-Houston, the Episcopal Diocese of Texas, the University of St. Thomas Donald S. Nesti, CSSp Center for Faith and Culture, the Union Baptist Association and the United Church of Christ. The music ministers were the Catholic African-American Mass Choir, the Holy Family Catholic Church and the NCGCC Houston and Pleasant Hill Baptist Church.

“Ministers and clergy recognize that as Church leaders we are called to lead our communities to a better understanding of each other through prayer and dialogue,” Father Samuels said. “We all share a common mission to spread the Gospel of Jesus Christ. We are constantly reaching out to other churches, and they are reaching out to us, to form partnerships in prayer services and talks that foster ecumenical dialogue.”

During the Invocation of the Holy Spirit at the start of the service, Rev. Lynn Hargrove, stated and recording clerk with Presbytery of the New Covenant, spoke of the mission of breaking the chains that keep people in oppressive structures and that we must continue to pray for unity in Jesus Christ. The sermon, led by Rev. Harvey Clemons, pastor of Pleasant Hill Baptist Church, touched on the difficulties of understanding how God loves everyone in spite of the atrocities in our world.

“We are rooted and grounded and established in the love of God,” Rev. Clemons said. “God makes individuals have a change — that’s what resurrection is. You can see when a person has been touched, converted, changed. When you come to know God loves everyone, what an attitude adjustment.”

As he closed his sermon, Rev. Clemons celebrated the diversity at the service.

“Unity does not mean uniformity,” he said. “What drew us together is what we have in common. We are not victims. We are in our place so that we may become light in a place of darkness and that we are one.”

The 2018 charity chosen for the collection during the service was United Methodist Committee on Relief (UMCOR) Disaster Relief, the humanitarian relief and development arm of The United Methodist Church. For the Prayers of the Faithful, all gathered together displayed a powerful show of solidarity by joining hands as they prayed for unity in Christ’s church and redemption in a broken world.

Jan Skrehot, a member of the planning committee and the vice-chair of the Ecumenical and Interreligious Affairs Commission with the Archdiocese of Galveston-Houston, said ecumenism is the vital mission of the Church to restore the visible bonds of Christian unity. She also is the associate director of Pastoral and Ecumenical and Interreligious Initiatives at the The Center for Faith and Culture at the University of St. Thomas.

“Prayer services for Christian unity provide the body of Christ a time to come together and surrender to the work of the Holy Spirit in the life of the Church as minds, hearts and voices are raised to God in unison; a powerful witness to the world for the desire to be one with God and with one another,” she said.

The next event the Ecumenical and Interreligious Affairs Commission and the Center for Faith and Culture will host is a symposium titled, “Deep Roots, Deep Faith: Catholic-Orthodox Encounter.” It will be from 8:15 a.m. to 3 p.m. on Saturday, Feb. 17 at the University of St. Thomas. More information is available at stthom.edu/deeprootsdeepfaith.