East and West drawn together in fellowship, faith 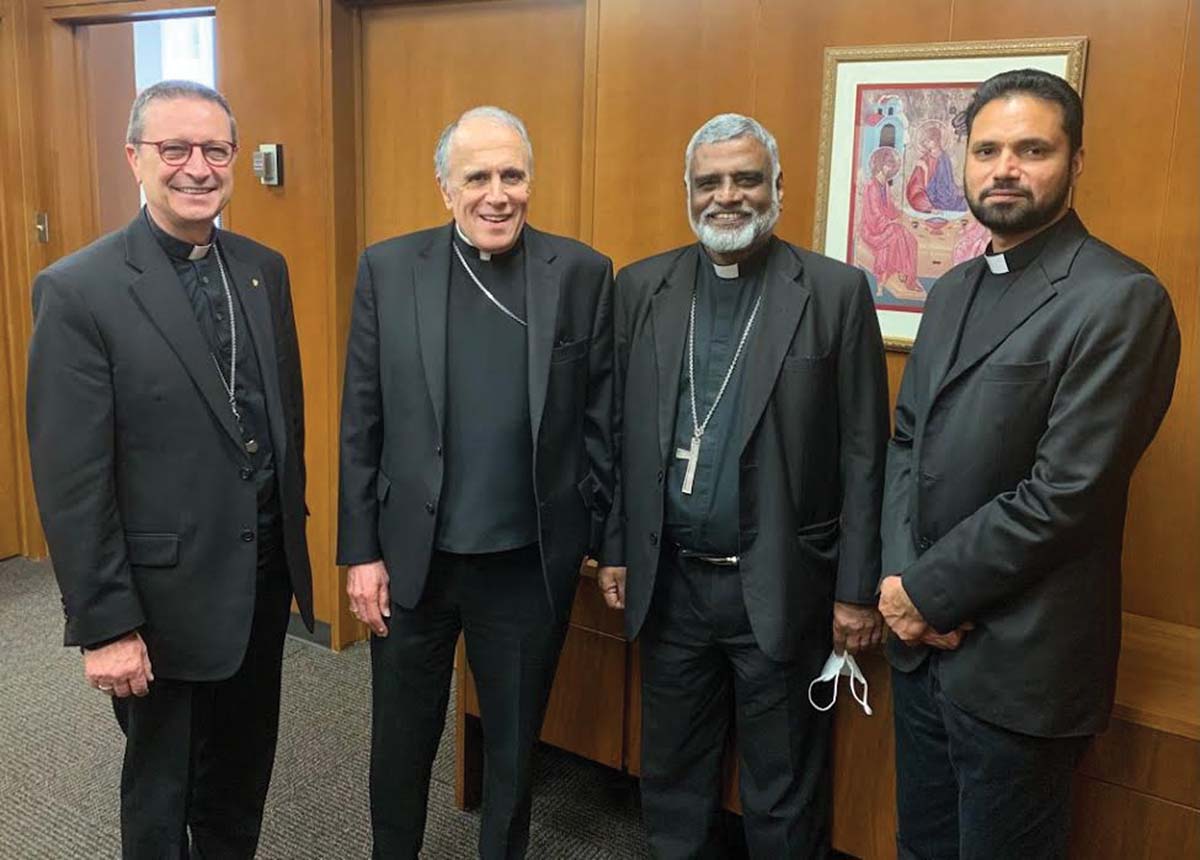 STAFFORD — The Western Rite met with the Eastern Rite at St. Peter’s Syro-Malankara Catholic Church in Stafford on Oct. 31.

Father Binny Philip, the pastor of St. Peter’s Parish, invited the St. Mary’s Seminary community to encourage communication and cultural exchange between the Roman Catholic seminarians and the Malankara community.

“The uniqueness of liturgical worship in 24 rites and the unity in one faith is the beauty of the Catholic Church,” Father Philip said. 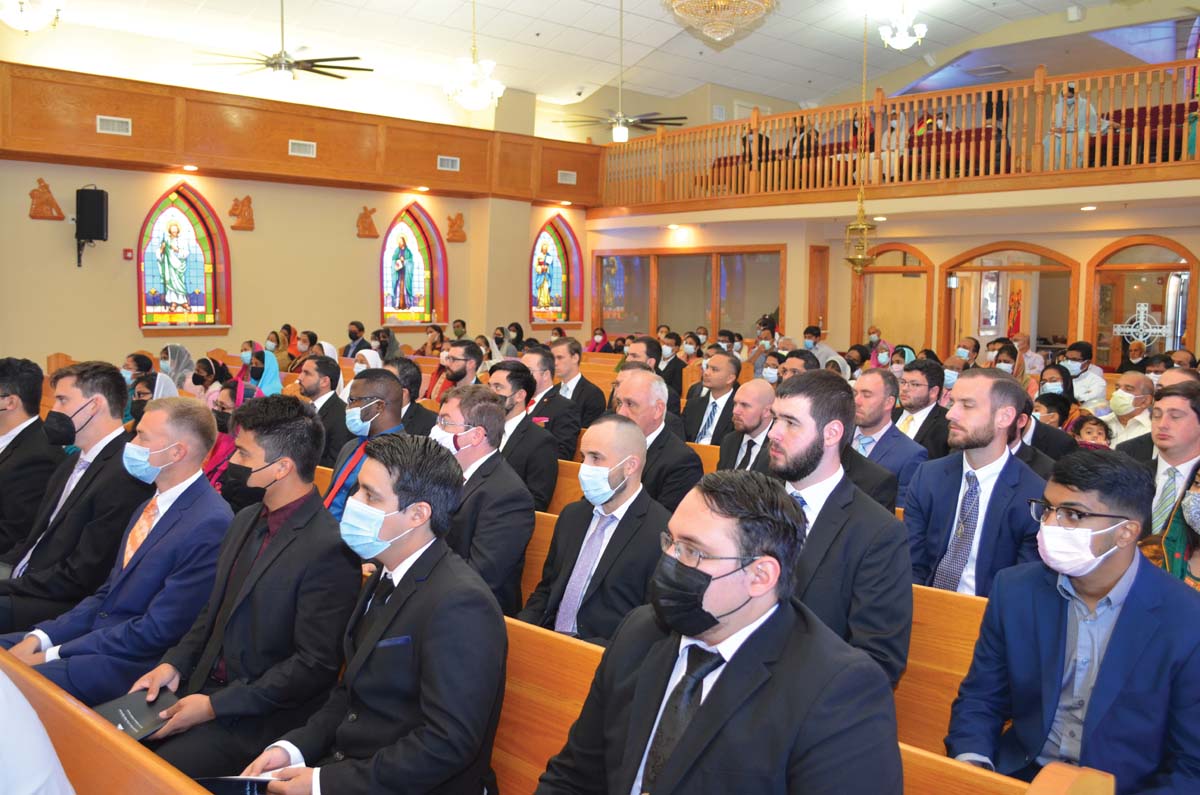 James Mathew, Malankara parish secretary, said, “One of the true meanings of being a Catholic is when the East and West can come together to celebrate their shared faith.”

The uniqueness of the Syro-Malankara tradition lies in multiple ways. While, like all sui iuris churches in Catholic Church, it is under the authority of the Holy Father Pope Francis, the Mass or Qurbono has a lengthened epiclesis that includes many intercessions.

Sui iuris (which means “of one’s own right”) refers to the Universal Catholic Communion, which is comprised of 23 sui iuris Churches: The Roman Catholic Church and 22 other Churches known collectively as Eastern Catholic Churches.

The Syro-Malankara Church is one of these Eastern Churches in full communion with Rome.

John Clark, a fourth-year seminarian from Cypress, said, “I like that it’s long, and it’s nice to have time to pray. The intercessions are stronger and more explicit compared to the Latin Church.”

Joshua Biju, Malankara youth treasurer, said, “It was a nice experience to see the diversity and inclusion. The priests and seminarians graciously accepted and enjoyed our culture, company and food.”

“We worship in different ways, yet the praise and glory are offered to the Same Triune God,” said Salu Samuel, Malankara parish treasurer.

Before the Mass began, Father Philip explained that “the expression of Jesus’ experience is the basis of the Liturgy which is mainly rooted on the mission work of the Apostles and disciples.”

This Liturgy is rooted in signs, symbolic gestures, languages and references to the Old and New Testaments.

“You see the taking off of the shoes before entering the church and more reverence to the priest,” said Alejandro Moreno, a fourth-year seminarian from Brownsville. “The whole flow of the Liturgy is beautiful.”

Further, the Latin Mass includes often kneeling; however, the parishioners stand throughout most of the time in the Malankara Mass. Genuflecting is replaced with bowing in most cases.

The Malankara Qurbono (Mass) includes many hymns, specifically the alternating verses sung by the men and the women parishioners.

In his closing comments during the Oct. 31 Mass, Father Manzano discussed St. Peter’s role from the Gospel passage. Father Manzano referred to the charism of Peter, the patron saint of the Malankara Catholic Church in Stafford, as “united with the Holy Father, Pope Francis, the successor of Peter who in his ministry of charity presides over all the Churches in love.”

“I hope you will continue to inspire our young people to live this beautiful life of a vocation to the priesthood, give oneself totally to God,” he said.

Father Earthman said the visit to St. Peter’s “was an amazing opportunity for St. Mary’s Seminary to experience the rich liturgical and cultural diversity of the worldwide Catholic Church at the Syro-Malankara parish in the Greater Houston Area... The seminarians and visiting priests learned to ‘breathe with both lungs’ as Pope St. John Paul encouraged us to do. The West Syrian tradition is full of beautiful liturgical texts that faithfully transmit the Catholic faith we share in common.”

What is the Syro-Malankara church?

On Sept. 20, 1930, Archbishop Geevarghese Mar Ivanios reunited to the Catholic Communion from the Malankara Christian community of Kerala, India, after the separation of nearly 300 years. It is known as the Reunion Movement.

The Malankara Syrian Catholic Church (also known as the Syro-Malankara Church) is a Major Archiepiscopal Church, and its head is Baselios Cardinal Cleemis Catholicos, major archbishop of the Archdiocese of Trivandrum in Kerala, India. At present, there are 11 Dioceses which include 500,000 around the world. In the U.S. and Canada, the diocese, St. Mary Queen of Peace Malankara Catholic Eparchy, is led by Bishop Dr. Philipos Mar Stephanos. St. Peter’s Church in Stafford, founded in 1985, belongs to this diocese and comprises 106 families.

Parish officials said the Archdiocese continues to offer spiritual and material support, with several Malankara priests working at the Archdiocese and staying as priests in residence at St. Thomas More Catholic Church for more than 20 years.