Dwelling among the Stations of the Cross

A life-size statue depicts Jesus Carrying His Cross at Our Lady of Lourdes Catholic Church in northwest Houston. The parish, located at 6550 Fairbanks North Houston Rd. in Houston, features a sprawling life-size Stations of the Cross walking path that is open to visitors. (Photo by James Ramos/Herald)

Editor's note: Looking for the Via Lucis? Click here.

HOUSTON — At the height of nationwide stay-at-home orders in 2020, Pope Francis presided over an emotional and sobering Stations of the Cross, or Via Crucis (Way of the Cross) in an empty St. Peter’s Square on Good Friday.

The meditation was a stark contrast to past events, usually held in Rome’s Colosseum. The emptiness of St. Peter’s Square seemed to highlight the impact of isolation and desolation felt throughout the world as the pandemic grew.

The meditations were written by a diverse group of people who work, live and minister to those in prison. The meditations from a Paduan prison were written by a prisoner serving a life sentence, two parents whose daughter was murdered, prisoners, the mother of a prisoner, a catechist, a priest accused and later acquitted, a corrections officer, a civil judge, among others.

In the Stations of the Cross, “God tells of Himself and speaks to us within a story; e invites us to listen attentively and mercifully,” Pope Francis said to them in a message. “I want to thank you also because you have scattered your names not into a sea of anonymity but rather into that of the many people linked to the world of penitentiaries. Thus in the Via Crucis, you will lend your story to all those who share your same situation throughout the world.”

In the Stations of the Cross, we lend ourselves to Christ in His own story. Often as we pray the Via Crucis in our parishes, we do not know the crosses that the others around us are carrying.

But in praying the Way of the Cross, which so intimately reflects on the Passion of Jesus Christ, we reflect what the pope said last year: we do not cast our names in anonymity, but into a faithful prayer of a Church united. We become like Pope Francis, who said, “I dwelt amid your words, and I felt welcomed, at home.” We dwell among the Stations of the Cross, and we may feel at home like the pope did.

For centuries, artists and painters have depicted the Stations of the Cross, trying to interpret the story of Jesus Christ.

Below, a 1565 oil painting by the Italian artist Titian shows Christ Carrying the Cross, with Simon the Cyrenean behind Him. Renown for its detail and intimate view of Christ, Jesus’s eyes seem to follow the viewer, drawing all into Christ’s story. It is on display at the Museo Nacional Del Prado in Madrid, Spain. 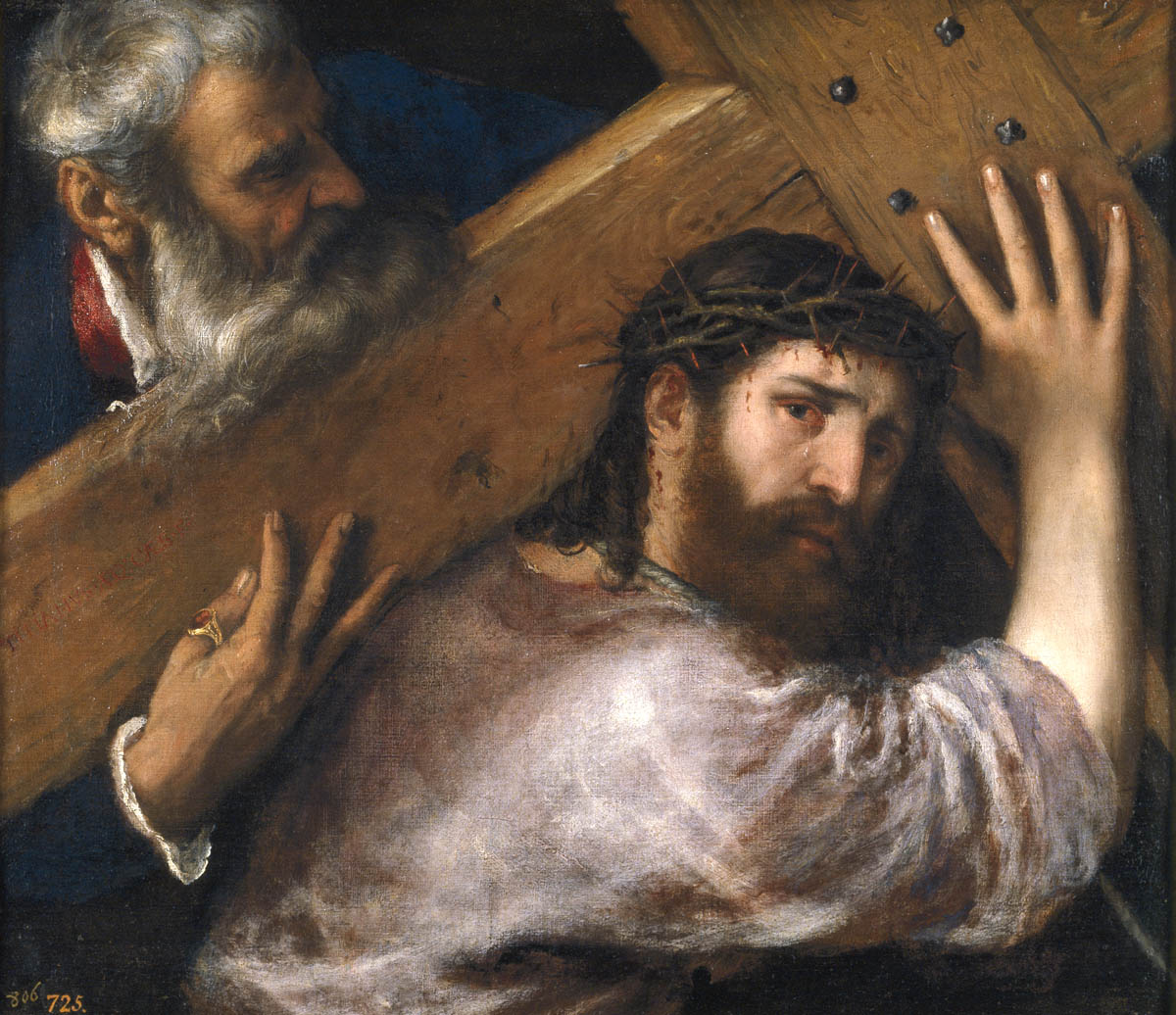 According to the U.S. bishops conference, the Stations of the Cross began as the practice of pious pilgrims to Jerusalem who would retrace the final journey of Jesus Christ to Calvary.

Later, for the many who wanted to pass along the same route but could not make the trip to Jerusalem, a practice developed that eventually took the form of the 14 stations currently found in almost every church.

Today, in parishes all around the world, faithful pray the Stations of the Cross on Fridays during Lent. Different meditations offer varying perspectives of the Passion of Jesus Christ, connecting the story to today’s crosses, such as human trafficking, poverty, racism and other intentions, like vocations and pro-life causes.

Several parishes and ministries around the Archdiocese have large life-size outdoor Stations of the Cross that are perfect for social distancing and peaceful meditation.

Officials said they welcome visitors to pray and meditate. Various health guidelines remain in place, including masks and other measures. Be sure to call the parish offices for visiting hours.

In his 2009 Way of the Cross meditation on Good Friday, Pope Benedict XVI said: “After Jesus left this world, Christians began to look back and interpret His life and mission. They carried His message to the ends of the earth. And this message itself is Jesus Christ, who is ‘the power of God and the wisdom of God.’ It says that the reality is Christ and that our ultimate destiny is to be with Him.”

Editor’s Note: ‘Living a Life of Prayer’ continues a series exploring the deeper meaning, context and history of some of the Church’s greatest treasures: its prayers, like the Stations of the Cross. Coming up next issue: the Divine Mercy Chaplet.