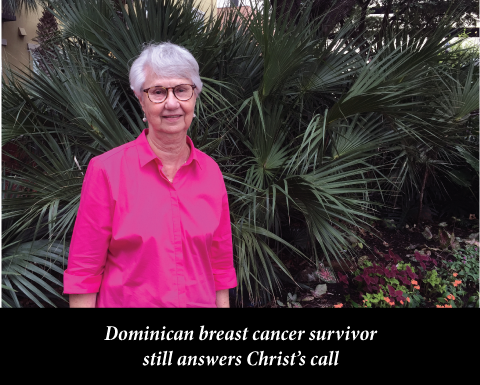 Sister Carol Mayes, O.P., a breast cancer survivor, is motivated by Christ’s call for justice in life as she leads retreats, spiritual direction and the Dominican Family, her order’s lay community. Photo by James Ramos/Herald.

HOUSTON — The postcard told her that her mammogram was clear and to return in a year. But had Sister Carol Mayes, O.P. listened to that diagnosis, she wouldn’t have made it.

“I would have been dead, no question about it,” Sister Mayes said.

Thanks to a doctor’s inkling of a misdiagnosis, Sister Mayes had just returned from a biopsy that lead to the discovery, and removal, of malignant breast cancer cells that had metastasized to her lymph system, which would result in eventual chemotherapy.

The extensive chemotherapy could not have found Sister Mayes in a busier time of life. Serving as prioress of the Dominican Sisters of Houston and in leadership with the Leadership Conference of Women Religious, cancer treatment was not in her plans, but she took it on any way.

“I’ve always just done my job,” she said. “It never occurred to me not to do my work. I was in leadership with my community as prioress; I just knew I had to do it.”

Sister Mayes said she followed the inspiration of the sisters who taught at St. Agnes. “They were young and happy, fulfilled in their ministry and great teachers. It was a simple choice for me.”

Eventually, finding herself teaching at Catholic schools, her decision to follow those teachers became a call to stay to lead Catholic schools in the Gulf Coast like O’Connell High School in Galveston, where she served as principal for nearly a decade. Wanting to learn more theology after Vatican II, Sister Mayes received a Masters in Theology from University of Notre Dame.

Her work would take her to the original Ben Taub Hospital, where being a chaplain was a “pivotal” point for her.

“I knew all this theology, head stuff,” she said. “When I was there, I really saw people’s faith and kindness to each other. They had nothing and they would help each other, this was a county hospital.”

Sister Mayes said she vividly recalled John’s Gospel, where Jesus approaches and heals an ill man who had no one to put him into the Bethesda pool.

Her own experience as a patient who underwent care for her breast cancer gave her deep insight into the patient experience and also both the lack of care available and the strong sense of community found in patients.

She said she struggled with how she had her community to pray for her and remembered the souls in Ben Taub with no one to pray for them. “How is God going to heal me, and not that poor person?” she said.

She witnessed patients supporting each other in their worst moments of physical sickness, sharing all they had to give in many aspects, including sharing money to pay for their only source of entertainment and distraction from their health. After seeing that, Sister Mayes wondered, “would I be so generous? They really gave everything. It’s a culture we don’t understand when we have so much. Many of (the patients) had no family, but they would still help each other.”

She credits her Dominican community and her treatment groups for supporting her in her hardest times.

“The (Dominicans were) incredibly supportive, they’ve always been,” she said. “The hardest part was realizing this awakening that I was not immortal, but also the physical side of it. You’re sick. If you’re taking chemo and working full-time, it’s physically hard,” she said. Sister Mayes carried her treatments with her on her travels as prioress. “I was scared. I think about that when I read in the paper about young women with children dying.”

When the cancer of a young woman with a two-year-old son in her treatment group re-occurred and spread, Sister Mayes said she learned the value of every day and the deep gratitude for life.
“It was traumatic. I had been helping my whole life, my parents were still healthy and living. I remember thinking I was going to die, you know, I think until that time I was going to live forever,” she said. “It changed my perspective on life, realizing that I wasn’t going to live forever.”

Inscribed on the inside of the ring she received for her final vow profession, “I am with you always,” motivates Sister Mayes as she celebrates her 60th jubilee as a consecrated woman religious.

Wrapping up her second term as prioress for the Dominicans, she continues to be active in faith communities like St. Cecilia Catholic Church, the Dominican Family (the order’s lay community) and leading retreats, spiritual direction and more.

“You often wonder, I don’t believe that it’s God’s will, that you live and you die,” she said. “I believe that God is with you always, and that you’re never alone. You look at why some live and some don’t. Catholics are lucky; we can just call it a mystery.”