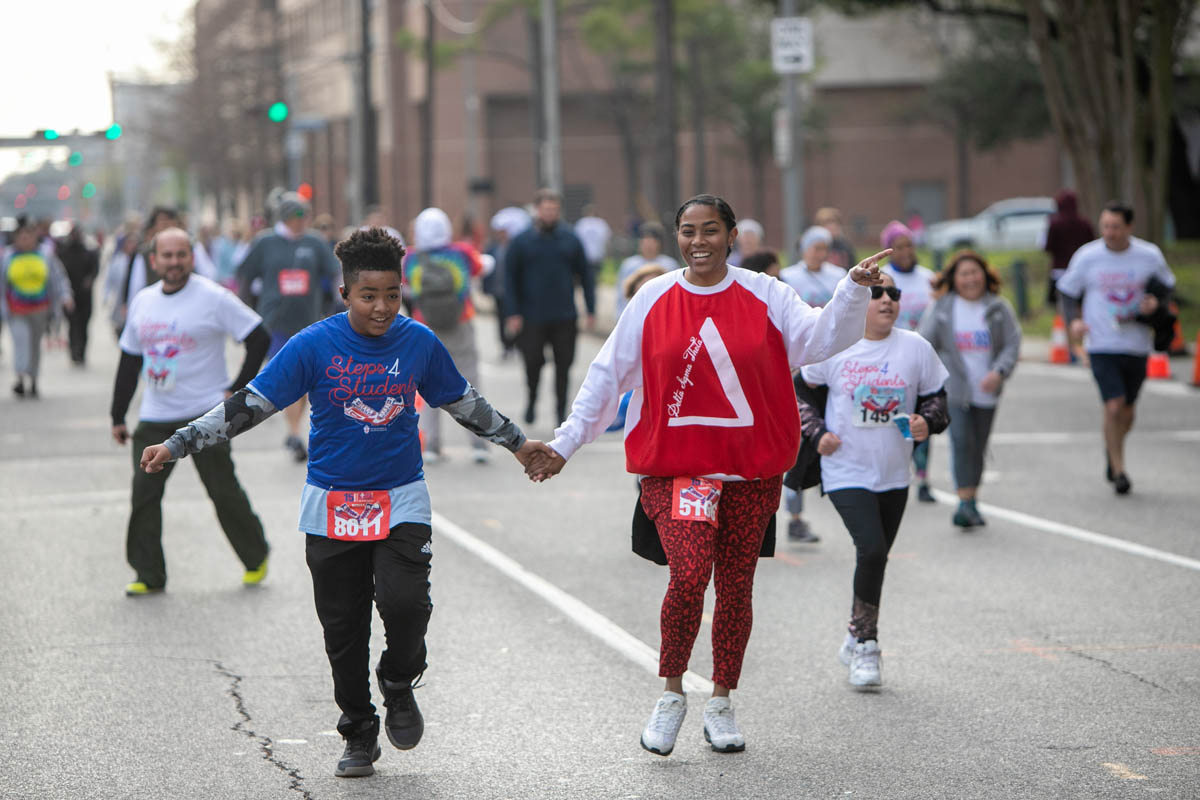 Officials said joining Steps for Students has never been easier or more convenient as the 2021 5K run and walk goes virtual this year. (File photo by James Ramos/herald)

HOUSTON — Principal Emilie Robert of Our Lady of Lourdes Catholic School in Hitchcock is revving up to have a pie thrown in her face and a “color run” for her students to raise funds for the upcoming Steps for Students Virtual 5K.

The annual Steps for Students fundraiser, which usually draws thousands of participants to downtown Houston, will be going virtual Feb. 20 to keep Catholic school students and staff safe.

But individual schools are also coordinating safe, socially distant runs on campus to create the camaraderie that the big event fosters.

“We have incentives planned for the classes that raise the most money, and the student who collects the most gets to throw a pie in the principal’s face again this year,” Robert said. “I am choosing chocolate pie this time, not cherry, because I looked like I was bludgeoned. The student apologized to me before he threw it, but I said it was all for a good cause.”

Funds raised from Steps for Students help Catholic schools purchase new technology, pay for faculty training and tuition assistance.
Robert said Our Lady of Lourdes is also “doing our campus Color Run set for Feb. 19. We are having the kids watch videos of what a color run is for those new to the school and to get returning students pumped up.”

The runs will be divided to have Early Childhood students run first, then elementary and lastly middle school students. To add to the excitement as well as to be “in the spirit,” there will be students not running at the time at four stations around the track with packets of corn starch colored yellow, blue, pink and green. They will gently toss the bags at students running by to splash colors on their white T-shirts, Robert said.

“Even though COVID put a big kibosh on the major event, the kids are really enjoying competing to see who raises the most funds to be the class with a pizza and ice cream party,” she said.

But even more altruistic is a school service project with the Funds2orgs nonprofit that collects new or gently worn shoes to distribute in third-world countries.

“I’m calling it the ‘Walk with Me’ shoe drive in conjunction with Steps for Students. We are collecting pairs of shoes, and if we gather 2,500 pounds of shoes, the organization donates 40 cents per pound to the school and sends an 18-wheeler to pick them up,” Robert said.

“This helps in so many different ways – we are recycling, so we are helping the environment. People in need who mostly walk everywhere will have access to shoes, and it teaches our students about those factors,” she said.

Daniel Cardinal DiNardo and Catholic Schools Office superintendent Debra Haney are recording videos to cheer on all the schools’ students and their activities as well as encourage other supporters.

For runners who are doing the 5K solo, registrants will be asked to download an app called RaceJoy, an interactive race experience, said Steps race timer Richard Littrell.

“Runners and spectators can download the app, fill out a profile for registration, and hit start whenever they’re ready to run,” Littrell said.

The app automatically times and stops when the 5K mark is reached, he said.

For more information, to register and donate to Steps for Students, visit www.steps4students.org. †