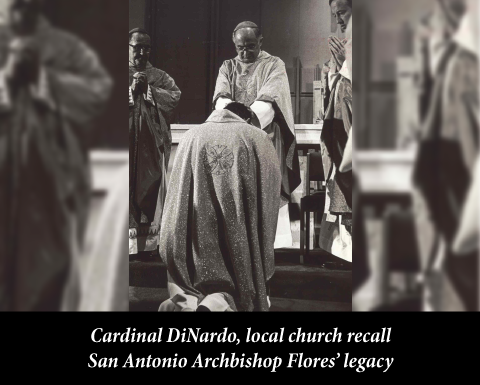 The late Archbishop Patricio Fernandez Flores, retired archbishop of San Antonio and the first Mexican-American elevated to the hierarchy in the Catholic Church in the United States, is pictured in this photo from the 1990s. Archbishop Flores, 87, died Jan. 9 of complications of pneumonia and congestive heart failure. Photo courtesy of the Archives Office.

The bishop, who dropped out of school to be a migrant farmworker, was known for his support for farmworkers, Mexican-American civil rights and his love of his culture and heritage.

“Archbishop Flores’ legacy in social justice, along with his pastoral presence and generous spirit, continues to resonate,” said Daniel Cardinal DiNardo. “He was a pioneer, a leader and an advocate for the country’s Hispanic immigrants and the poor.”

Los Angeles Archbishop Jose H. Gomez described Archbishop Flores as his good friend and mentor and “a pioneer and role model not only for me but also for a generation of Hispanic priests and Latino leaders.”

He said the archbishop of San Antonio, who retired in 2004, “knew the struggles of Hispanics in this country, and he was a friend to the farmworker and a voice of conscience for dignity and human rights. He taught all of us to celebrate our heritage and traditions and encouraged us to share our faith and values proudly and to become leaders in our communities.”

Archbishop Flores, born in Ganado, was one of nine children and called “Ticho” by his family.

His younger sister, Mary Moreno, told Today’s Catholic, newspaper of San Antonio Archdiocese, in 2004 that her brother would often walk up and down the road in front of the family home praying the Rosary. “He was always very close to God,” she said.

He also had a light side, often winning dance contests with Moreno, and played a number of instruments and sang.

In 1987, he welcomed Pope John Paul II to the San Antonio Archdiocese as part of the pope’s nine-city tour. The pope celebrated Mass for a crowd of 330,000 people in a field that is now the site of John Paul Stephens High School. The Mass still holds the record for the largest gathering in the state.

In an interview with Today’s Catholic newspaper in preparation for his retirement, Archbishop Flores said what he remembered most fondly of his time as archbishop was simply his life as a priest.

“I’ve spent 48 years as a priest, and I have loved it all. If I had the chance to start all over again, I would not hesitate. I might have prepared better academically and in some other ways. But I have literally found great satisfaction in simply being a priest — being a bishop is simply assuming additional responsibility.”

“I have found it very challenging and very satisfying. So I’ve been happy at it and will continue to be happy,” he added.

Following Archbishop Flores’ retirement, he resided briefly at Casa de Padres retirement center for priests of the archdiocese, but he spent the past several years at the Padua Place residence for priests needing medical assistance.

In an interview with the Texas Catholic Herald in 2014, the late Father Ed Abell fondly recalled his first assignment following ordination was serving under Father Patrick Flores.

“What an incredible man,” Father Abell said of Archbishop Flores. “To begin my priesthood with the kindest, nicest man I have ever met. His patience was unbelievable.”