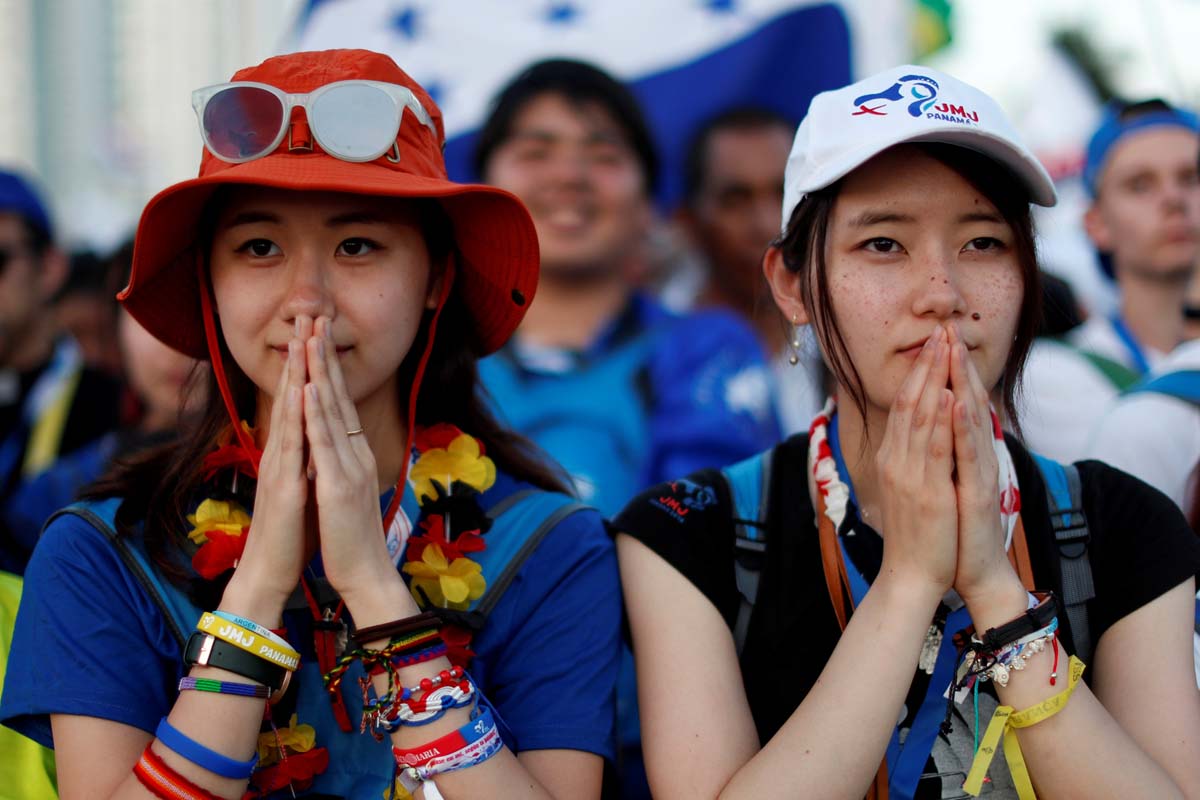 PANAMA CITY (CNS) -- Jorge Soto wore a wrestling mask typical of Lucha Libre fighters in Mexico and every few steps he took, others would sidle up to have a picture taken with him. The mask was fun to wear, and it was something associated with his native country, which he was proud to represent at 2019 World Youth Day in Panama, he said.

Other pilgrims wore the flags of their respective countries like a cape on their backs: Australia, El Salvador, Guatemala. Though World Youth Day had not officially started, it seemed as if it unofficially began Jan. 21 on the observation deck overlooking the locks of the Panama Canal, where the young -- and the young-at-heart -- formed a conga line as some beat the drums and others chanted or cheered to honor the Catholic Church, Pope Francis or Mary.

The U.S. is sending more than 12,000 youth and young adults, ages 16 to 35, to Panama for the thirty-fourth annual celebration of World Youth Day, according to the U.S. Conference of Catholic Bishops. Dozens of groups were from Texas, including several from Houston and Dallas.

Daniel Cardinal DiNardo of Galveston-Houston will be attending World Youth Day, joining Bishop Caggiano who will be one of 20 bishops who also have been invited by the Vatican to serve as English- and Spanish-language catechists in Panama, giving reflections to groups of pilgrims on the 2019 WYD theme, “I am the servant of the Lord. May it be done to me according to your word.” (Lk 1:38). Other U.S. catechist bishops include Blase Cardinal  Cupich of Chicago, Sean Cardinal O’Malley of Boston, and Archbishop Thomas Wenski of Miami.

It's a time when "you feel good about everything," said Soto, attending his second World Youth Day, an experience he said helps him meet an international cast of thousands of young Catholics and find meaning in life and in his faith.

As his native country struggles with secularism, he said, "it's up to us to come up with solutions and help others not slip away from their lives of faith." Part of what World Youth Day provides, he said, is a kinship and strength in spiritual beliefs, even if people come from different parts of the world.

For 16-year-old Charlie Martin of Australia, the event presents the opportunity to come in contact with a physical reality of a Catholic Church that was alive in the Americas centuries before his native country became an independent nation in 1901, one told by the many historic buildings where Catholics in the region worship and where they have built lives of faith. But he also experienced different expressions of that faith than he's used to.

"It's been an amazing, you feel like a celebrity," he said, explaining the warm greetings expressed by Panamanians when they see the pilgrims walking about. "We walk into shopping centers and people are clapping for us."

And indeed, locals wave at buses carrying pilgrims and local businesses have placed posters on storefronts welcoming them and Pope Francis to Panama.

"It's been amazing," said 15-year-old Aubrey Tedd, also traveling with Martin. "Everyone comes together with great energy."

Though it was clear that some did not speak the same language, they still stopped to shake hands, to sing, to have photos taken together, and ultimately to spontaneously dance near the Panama Canal with people they had never met but with whom they shared some of their deepest set of beliefs.

Though most were just passing through to visit the canal, it became clear, by the flags, by the wearing of pins featuring saints and crucifixes around their necks, that most of those gathered at the site of the historic waterway had arrived for more than just tourism. So, even though there was no official plan, some, perhaps inspired by the spirit, just began shouting.

"I want to experience this enthusiasm," he said. "And see the hope of the Catholic Church."

Even those who weren't Catholic, such as Jose Gonzalez, a Protestant who was visiting the canal with his Catholic wife, Silvia Lopez, from Huehuetango, Guatemala, were enjoying the moment. Gonzalez said there was much to learn from the experience of faith World Youth Day brings. In fact, it was Gonzalez who encouraged Lopez to attend World Youth Day with him; they just happened to be visiting the canal when the large group of pilgrims arrived.

"We'd heard good things about (World Youth Day)," from one of his brothers, said Gonzalez, adding that he was looking for something he and his wife could benefit from spiritually. People with different beliefs need not be at odds with one another, he said, or be afraid to learn from what the other might be able to teach because the goal is the same: unity and the need to make the world better.

Shortly after, the conga line began. The young pilgrims started it and then some of the chaperones followed.

"It's a lot of fun to be with them," Detroit Auxiliary Bishop Donald F. Hanchon told Catholic News Service.

Having spent time studying in Mexico, he is familiar with the joyful expressions of faith, particularly from the Mexican youth, he said. Hosting the event in a Latin American country can only benefit Catholics from other parts of the world, who may experience something different than what they're used to, he said.

"It's a part of the world that's worth visiting," he said.

While the pope and the WYD pilgrims meet in Panama this week, several dioceses and communities across the United States will be hosting “stateside celebrations” concurrent with WYD events for thousands of young people in the U.S.

There will be major gatherings for youth and young adults in California, Florida, Hawaii, Indiana, Maryland, New Jersey, Pennsylvania, Texas, Washington State, and a multi-diocesan flagship event in Washington, D.C., called “Panama in the Capital” with the Apostolic Nuncio, Archbishop Christophe Pierre, Mark Kennedy Shriver of Save the Children Action Network, and many others. Details of these events can be found at http://www.usccb.org/about/world-youth-day/stateside-wyd-celebrations.cfm