Deacons help bring living water to those parched in Nigeria 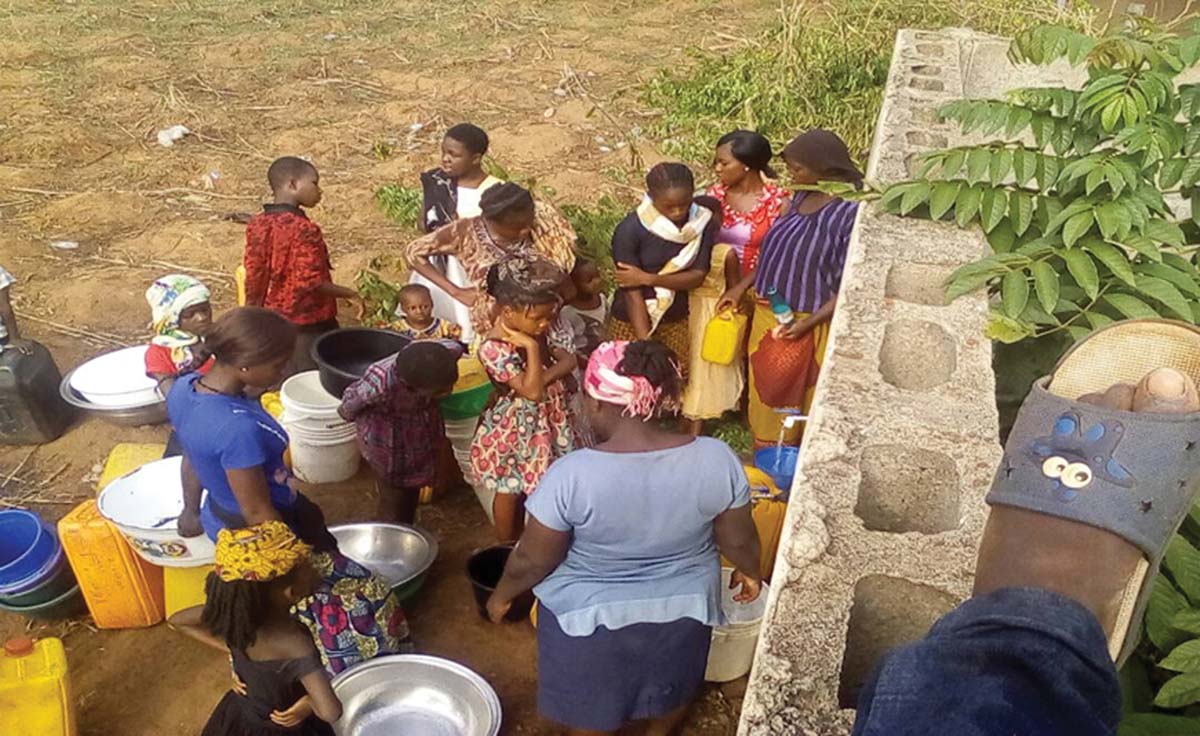 HOUSTON — The children shout joyfully and the adults take turns placing buckets under the clean and running water — the latest of six boreholes and wells that local Houston deacons had a hand in bringing living water to the parched people of Nigeria.

Sister Franca Onyibor of the Missionary Sisters of the Holy Rosary said, “like a mighty big miracle, waters began to flow... the whole village went electric with joy. In one voice, they asked me to convey to you and your team, their joy and deep appreciation.”

Sister Onyibor wrote a thank-you letter from Nigeria to Houston-area deacons who worked together to bring about what many take for granted in opening a faucet and expecting clean water to flow.

“To us, this is an amazing story of angels sent from afar,” Sister Onyibor wrote.

It started in 2012 when Deacon Robison and Deacon Berntsen and their wives met at their regional deanery meeting and discussed how monies were being donated by women at the Bay Area Archdiocesan Council of Catholic Women (ACCW) and Mary Queen parish through their “Water for Life” initiative. However, there was no vehicle yet to achieve it. Linda had met Sister Onyibor and Bishop Hilary Dachelem at Creighton University in Omaha, Nebraska when they all attended the Masters program in spiritual direction.

“We had lived together every summer, sharing meals, studies, projects, social time, worship and classroom learning. It was during the classroom discussions that living conditions they endured came to light. And it was shocking to me to learn that many of these new brothers and sisters in Christ live where there is no electricity and no clean water,” Linda said. “It was heartbreaking to learn that these beautiful people and the thousands they had dedicated their lives to serving had no clean water to drink. That’s when Deacon Paul and I began working towards drilling the first well.”

They were all praying about how to proceed when Jo Ann, who worked at Catholic Charities at the time, said she would check with the agency and with Catholic Relief Services officials, the international branch.

At about that same time, Jo Ann received an email from a frustrated Deacon Hall, who had tried repeatedly to offer his drilling services for needed water wells as a donation to several international agencies.

Deacon Hall said, “That is when Deacon Frank and Jo Ann connected me to Deacon Paul and Linda and first, Bishop Hilary, and then Sister Franca. With God’s grace, and my experience of 33 years in the drilling business, we were able to successfully drill wells and bring water to the people.”

In the past five years, the Halls and the Robisons have donated thousands of dollars and equipment to drill seven water wells, known as boreholes — six in Nigeria and one with Catholic Relief Services in Zimbabwe.

The wells are strategically located in specific communities on Sisters of the Holy Rosary property with their Catholic-operated clinic, a seminary and near isolated villages where residents before had to walk two or three miles to a polluted river for their water. Each well is managed by the sisters and local residents.

“We are not looking for any honors,” Deacon Hall said. “My deepest prayer is that people’s hearts will be touched and we might be able to get more donations to allow us to drill more wells.”

Each well, depending on the difficulty of the sandy soil and depth to be drilled for the water and the isolation of the villages in getting equipment there through barely passable roads, costs between $20,000 to $30,000.

“So many times, we see devastation and can only pray. But there are times that we can help, like my company did in the rescue of the Chilean miners in 2010, and now all of us with the grace of God can bring the precious gift of water.”

And Sister Onyibor, in an article on the Missionary Sisters of the Holy Rosary website, writes how the wells are also acting as a mutual meeting place of peace for both Christians and Muslims alike in an area where so many Christians are being martyred in Africa because of their faith and refusal to fight tribal wars.

“I am amazed that with these visits, the bonds of friendship deepened so much that so many Muslims and Christians freely invited me to pray with them and to bless their homes,” Sister Onyibor wrote. “Through the support of those who share this vision of strengthening the bond of unity between Christians and Muslims, we now have an MSHR-operated borehole in Ankpa where Christians and Muslims drink from the same well.”

In other correspondence, Sister Onyibor wrote, “Communities in two states of the country are enjoying beautiful, clean living waters because of you so far away in Texas.”
Ryla Simmons of Catholic Relief Services wrote to Deacon Hall of the well in Zimbabwe serving 3,500 students and teachers and their families. She wrote, “Thank you for your generosity! Water is life. Besides the obvious health benefits of clean, accessible water... better teachers are attracted and the domino effect begins. You have made an impact that will last for generations.”

As a kind gesture, Deacon Hall and Deacon Robison, who also worked in the oil and gas industry and recently retired, agreed a tribute at the site of the last well drilled this year would be dedicated to Deacon Berntsen, who died Oct. 30, 2016 of an inoperable brain tumor.

Deacon Hall was able to visit and tell Berntsen in the last months of his life that a marble memorial plaque would be erected in his honor more than 6,500 miles away in Idah, Nigeria. Lying in his medical bed at his Houston home, Berntsen smiled, thanked Deacon Hall and gave him a farewell blessing “in the name of the Father, and the Son and the Holy Spirit,” still practicing his ministry to the end.

The plaque erected this past April reads, “Devoted to the Memory of Deacon Frank Berntsen whose Mission was to Bring Living Water to All.”